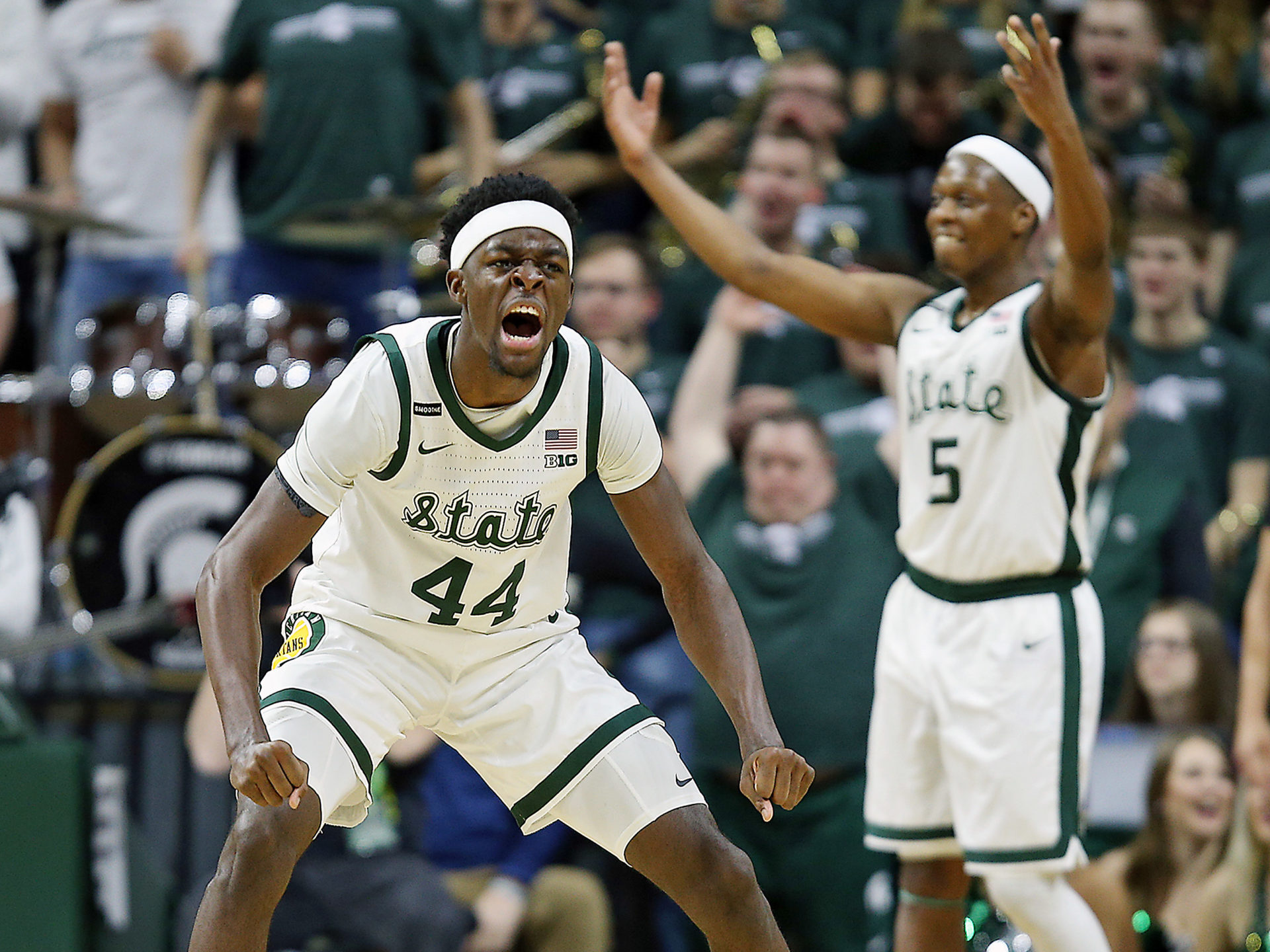 Six teams in the most recent AP Top 25.

This is only part of the madness that has ensued within the Big Ten this regular season. From players such as Luka Garza and Cassius Winston to coaches such as Greg Gard and Pat Chambers, the Big Ten has proven that it is not only the deepest conference in college basketball, but is also giving people reason to believe that one of its teams can win a national championship. The conference hasn’t had a national champion since Michigan State in 2000.

Most teams have struggled to find consistency not by their own fault, but because the rest of the conference is just that good. If you look at a ranking of the strongest schedules in the country, 12 of the first 16 teams will be from the Big Ten. Twelve teams also have at least four Quad 1 wins. All 14 have at least two Quad 2 wins.

In short, it’s truly one of those years where anybody can be anybody on any given night. Starting on Wednesday, that chaos will come to a rousing crescendo in Indianapolis’s Banker’s Life Fieldhouse.

The Gophers have stumbled quite a bit over the past month, with their only wins coming against Northwestern and Nebraska. However, that won’t be enough to make them a one-and-done team in this year’s tournament. Daniel Oturu leads Minnesota to a dominating win over Northwestern in a fight to keep their season alive.

The Hoosiers are a bit of an enigma in terms of where they stand on the bubble. They hold four Quad 1 wins and are ranked 39 in the Basketball Power Index, but they rank just 60 in the NET rankings and have lost three of their last four. Either way, they’ll need another big win or two to really cement themselves as an NCAA Tournament team. That’ll start with a rout of Nebraska.

The Wolverines beat Rutgers in both of their regular-season contests, one of which ended up being the Scarlet Knights’ only home loss. They’ve since lost three of their last four, with each of those losses being to a ranked team. Rutgers, meanwhile is riding a two-game winning streak. Despite this, the Wolverines still have what it takes to beat Rutgers again, especially considering that Isaiah Livers, who was hurt in their two regular season games, will be healthy now. It starts close, but Michigan holds on to move to the quarterfinals.

Luka Garza has already proven himself to be one of the better players in the country, maybe even a Wooden Award winner. The question is whether or not the Hawkeyes as a team can give him enough backup to make a deep run. Guys like Joe Weiskamp, Connor McCaffrey and C.J. Fredrick will need to step up and deliver a team effort, especially in a conference as competitive as the Big Ten. Their efforts will be enough to get by Minnesota and set up an intriguing rematch with Illinois in the quarterfinals.

The Boilermakers are another team in need of at least one more quality win in order to hear their name called on Selection Sunday. They boast one of the strongest schedules in the country as well as four Quad 1 wins, but a daunting task awaits. Ohio State enters the matchup having won nine of their last twelve games and haven’t lost consecutive games since January. Try as Matt Painter’s squad will, they just won’t be able to knock off the blazing Buckeyes, who will set up another intriguing rematch.

The Nittany Lions feature a wide array of playmakers. Some can score in bunches (Lamar Stevens), some show efficiency (Mike Watkins), and others can take the ball away (Jamari Wheeler and Myreon Jones). Their first tournament game will feature an Indiana team that beat Penn State 68-60 in their last matchup and desperately needs another quality win. Unfortunately for the Hoosiers, their not in Kansas anymore, or, in their case, Bloomington. Penn State’s talent wins out in the end and Indiana will be left sweating it out until Selection Sunday.

In their lone contest of the regular season, the Badgers shot 47.8 percent from three and 53.7 percent from the field, including 28 points from D’Mitrik Trice, knocking off the Wolverines in Ann Arbor. Wisconsin also carries an eight-game winning streak into this year’s tournament, the longest of any team in the conference. Even if Michigan improves their defensive efforts from the last time around, the Badgers simply have more momentum going into this one and in March, that makes a big difference. They send the Wolverines home in what will be their earliest Big Ten Tournament exit since 2015.

In the most recent game between the teams, the Illini held off the Hawkeyes 78-76 on Sunday. The Hawkeyes were more efficient on field goals, three-pointers and free throws, but Luka Garza had a shot that would’ve tied the game blocked at the buzzer, giving Illinois the double bye. Safe to say the Hawkeyes haven’t forgotten about that game and will be hungry for revenge. The Hawkeyes’ biggest weakness from that game was their 11 turnovers, but they’ll overcome that, avenging their previous loss and punching their ticket to the semifinals.

If Ohio State went into the tournament hot, Michigan State goes in scalding. The Spartans have won five in a row and six of their last seven en route to their third-straight Big Ten regular season title. During that stretch, they’ve scored no less than 78 points in each game while Cassius Winston has averaged 20.8 PPG over that span. Their 80-69 win over the Buckeyes should be a pretty good indicator of what this next matchup should contain.

These teams haven’t faced off since December 10, when Penn State handed the Terps their first loss of the season at the Bryce Jordan Center. Since then, the Nittany Lions have had one of their best seasons in program history and Maryland has reestablished themselves as a national power, picking up a share of the Big Ten regular-season title on the way. Both teams have been a bit shaky over the past few weeks, but are still very talented. However, when you look at the leaderboards for player stats in the Big Ten, you see a lot more names for Penn State. That’s what will make the difference in the first major upset in the tournament.

In January, the Hawkeyes beat the Badgers with help from a 21-point game for Luka Garza, below average by his standards. Cances are he’ll play better here as Iowa’s biggest playmaker. However, Wisconsin has not only more of them, but also enough to open up the floodgates and force Iowa to rely solely on its offense, something they’ve struggled with throughout the season. The Badgers win in a shootout and punch their ticket to the conference final for the first time since 2017.

These teams played twice in the regular season, with the road team winning each contest. Talent matters in March and both teams have plenty of that. However, what matters arguably more is coaching, an area where the Spartans hold a significant advantage with Tom Izzo at the helm. Michigan State wins a back-and-forth affair and put themselves in position to repeat as conference tournament champions.

No. 1 Wisconsin vs. No. 2 Michigan State

Fitting that the two hottest teams in the conference end up facing off for the Big Ten’s automatic bid. Nate Reuvers and Micah Potter lead a strong Badgers attack while Cassius Winston and Xavier Tillman Sr. have what it takes to answer back. Tom Izzo facing the Big Ten Coach of the Year in Greg Gard will make for a great strategic matchup as well. However, at the end of the day, the Spartans, from a player and coaching standpoint, are just a little bit more experienced in situations like these. Once the final horn blows, they’ll cut down the nets for the second straight year.