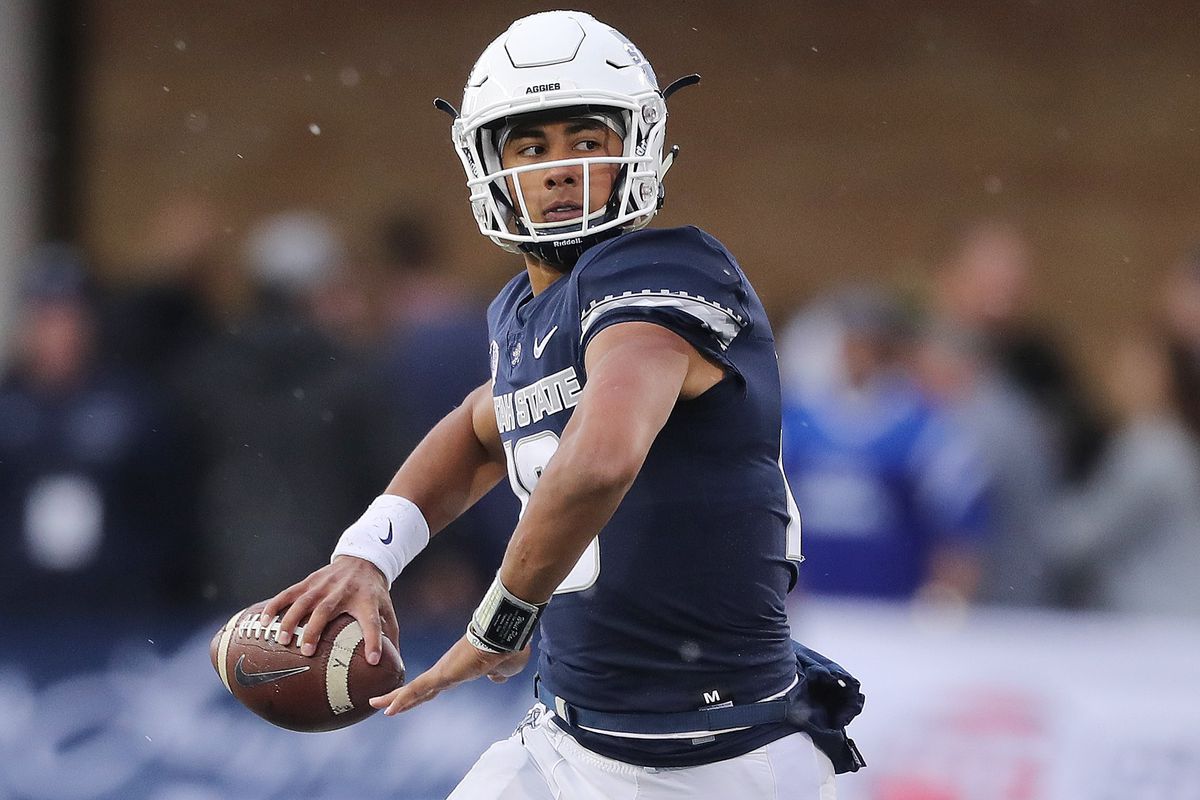 This is still an obvious choice. I just don’t see the Dolphins putting together a good enough trade for this to not happen. Burrow’s legacy begins in Cincy.

Woah!! Big trade here! In what is a somewhat shocking move, it is not the Miami Dolphins who trade up to get their star quarterback. It’s the Los Angeles Chargers. The Redskins slide back in the first and pick up LA’s 2021 first round pick for their trouble. Meanwhile, LA gets a new face and Tua moves back west. The incredible talent of the Alabama star is too much for the Chargers to risk waiting for, and they jump the Lions. Which means…

The Lions may be the biggest benefactor of any trade that involves some team and the Washington Redskins. If the Dolphins or Chargers trade up to the 2nd pick, it means that team is more likely than not taking Tua, so the Lions get lucky and nab arguably the best athlete in the draft. Say your prayers, Lions fans. This is possible, but a trade would have to happen.

Speaking of great athletes, Simmons is heading to East Rutherford and Nosebleed writer and Giants fan Colline Mullane agrees… While there is some doubt in my mind Gettleman makes the right choice here, I think he’ll be excited by the prospect of taking a guy who can play multiple spots. However, as fellow writer Nathan Baakko pointed out to me recently, those guys don’t always turn out. Somewhat of a risk here, but I believe it’s worth it.

From what I have seen on social media, Dolphins fans would not exactly be thrilled at the thought of not getting Tua or Burrow. Herbert is not a bad consolation prize. Well, depending on who you ask. Ask a Dolphins fan and they may say otherwise. But at this point, it’s take him, or trade back. They take the former.

Redskins make a move that some fans will find questionable since they don’t end up with Chase Young. However, what they get back is not bad at all. With Lamb and McLaurin as his top two receivers, it opens up the field a lot more for Haskins to make plays. And they get a 2021 first rounder? Pretty good deal.

Some people may argue that Brown is more likely to go before Kinlaw. But in the last few weeks, the Gamecock has received more attention. With his 6’6″ massive frame, he has the ability to really become one of the top inside pass rushers in the league. The Panthers defense is looking nowhere near as strong as it used to be, and this pick only increases their strength.

Nothing changes from my last mock with this pick. Becton is the best tackle available and provides instant relief for Kyler Murray in the pocket.

The Jaguars need that “it” factor back in their secondary. With Ramsey and Bouye both heading elsewhere within the last 6 months, Jacksonville needs help and fast. Insert Okudah, who is the most polished corner available in this year’s draft.

Wills went late in my last mock draft and once realizing this was unlikely, I made the adjustment. While Josh Jones, who went in this spot, would be an exceptional choice, Wills is too talented to let slip into the late rounds and even the Browns will see that.

With Ceedee Lamb taken with the 6th pick, the Jets are left to take the next best choice. Jeudy is no consolation prize, though. He has the ability to be the best receiver in this draft, and may have the most upside. He is an athletic freak and will make an instant impact for Darnold and the Jets offense.

To draft an offensive lineman or a wide receiver? That is the question. Whether tis nobler to protect Sam Darnold or to take arms against opposing secondaries with speed on the perimeter.

One of the fastest players available in the draft is heading to Vegas. Ruggs’ speed catches Gruden’s eye, allowing Derek Carr or whoever their quarterback will be to have a #1 receiver to throw to.

A lockdown defender with the Gators, Henderson was a top-recruit that performed really well. His stock has increased a lot lately, as his combine numbers really gave him a needed boost up the boards. Pair him across from Richard Sherman, and the best defense in the NFL just got even better.

Protection, protection, protection. That’s what Tom Brady needs to be successful in Tampa Bay, or what he now calls “Tompa Bay.” He already has weapons with Evans and Godwin, so now he just can’t take so many hits. Jones is one of the more underrated prospects of the draft, and here he has a great chance to thrive in Arians’ offense.

The Broncos could use some help on the outside or on the inside. Protecting Lock is going to be very important for the team’s success, and Wirfs could move from tackle to guard, or could also just stay on the ends. Either way, Wirfs is a great steal for Denver here and should be happy.

Speaking of steals, Chaisson would be the perfect for Atlanta. Putting him at the weak side linebacker spot would put him in the best situation. They already have Takk McKinley and Dante Fowler on the edge, and moving him back a little bit would make this pass rush one of the most lethal in the league.

Again, this does not change from the last mock. It’s hard for me to explain this pick other than the logic that Delpit just seems like a Cowboys player. Jerry would love to take the All-American safety here, and he gets his wish.

A former top-5 projection, Thomas has been a victim of the draft being in April. Had we done the draft right after the season, he was looking at a very early pick. However, times have changed and his draft stock has dropped. Thomas still has great potential, however, and the Dolphins get a guy to watch Herbert’s blindside.

In my last mock, I had the Raiders taking QB Jordan Love. This pick is assuming the Raiders stick with Derek Carr for at least one more season, and maybe wait for the next draft class to go QB. With the signing of Damarious Randall, the Raiders still have to replace Jeff Heath as a starter, who is good, but in my opinion should be coming off the bench. McKinney fills that spot here, as his ceiling is very high.

Brown is another guy whose draft stock has been hurt the months leading up to the draft. An NFL ready player, Brown’s ability to play isn’t in question, but how high is his ceiling? Where can he go once he enters the NFL? The Jaguars hope he can go far and add him to help reinvent their offensive line.

The Eagles need a guy they can trust to make plays, and who better to take here than National Champion Justin Jefferson. Their current WR room consists of washed up vets and young guys who mid-to-low potential. Jefferson can reenergize this group and help Wentz.

No change here. The Vikings need a corner ASAP and Fulton is a great pick. Minnesota can hopefully get some production from Holton Hill and Mike Hughes, but if not, Fulton should be able to come in and become that #1 guy they need.

Whoever is going to be the Patriots quarterback, whether it’s Cam, Winston, Stidham, or a rookie, they need a target. At 6’3″, Mims is one of the most underrated receivers in this draft class. He ran a 4.38 40-yard dash, too. That speed with that height? This dude could be unstoppable.

The Saints need to start preparing for life after Brees. He has one or two years left for his career, and I’m sorry, but Taysom Hill is not the answer. Great athlete, very mediocre quarterback. Saints take Love here to prep him under Brees for a season or two, similar to the Patrick Mahomes situation, and then let him take the reins as the new face of New Orleans.

With Mims and Jefferson both off the board, Minnesota decides to take a different route and address their defensive line after losing Pro Bowler Everson Griffen. Gross-Matos jumps into a lineup that has bred defensive ends for years now and becomes their next All-Pro level guy.

The Dolphins starting running back right now is Jordan Howard…Yeah that’s not good. I mean, most of this team isn’t great, but still. Taylor can come in and make huge plays for a squad that desperately needs it. He’s the best running back available and the Fins take him at 26.

Baun has shot up draft boards in just the last week. I couldn’t see him getting drafted first round just a few days ago. However, after seeing all the talk he’s getting and watching some film, Baun would be a great fit in Seattle, especially if someone else signs Clowney.

The Ravens defense is already one of the best in the NFL and sliding Murray into the linebacker position makes them even better. Great pick for Baltimore at 28.

The Titans jump up to grab the guy they want to replace Delanie Walker with. Hopkins has drawn some first round interest from teams, as his athletic ability is something a lot of teams are looking for in a tight end.

The Packers have cycled through tight ends so much over the past few years. They’ve had a number of options from Jimmy Graham to Jermichael Finley to Jared Cook to many more. Now, they get the starter they’ve been looking for. They go up to grab Kmet, who was a very impressive target at Notre Dame.

After missing out on all of Jeudy, Lamb, and Ruggs earlier, the 49ers get a guy for Jimmy G. Reagor is one of the more “under-the-radar” picks of the draft, but has great ability to make an impact on an offense whose top receiver is now Deebo Samuel.

Gladney can move into the slot or play on the outside for the Super Bowl champs. Either way, he is a huge help. This defense is good, but it can still be better than what it is. Adding the TCU corner puts them in nice position for a back-to-back title run.