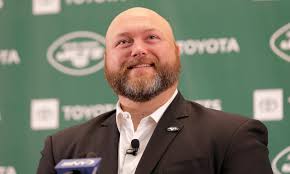 The Jets have reason for hope for the first time in a long time. A big reason for that is thanks to their new hire at general manager.

That’s right. The man you see up there (who could easily be mistaken for a member of the training staff) is the next general manager of the New York Jets.

Joe Douglas was formally introduced by the organization at a press conference on Tuesday. He was formerly the vice president of player personel with the Philadelphia Eagles and played a huge part in the construction of a roster that brought the city its first Super Bowl. Douglas worked with head coach Adam Gase while the two of them were with the Chicago Bears in 2015. Before that he worked in the personel department for the Baltimore Ravens from 2000-2014.

Douglas was the Jets first choice to replace Mike Maccagan and I can see why. His resume is very impressive and he has a sixth sense for acquiring and developing talent. That’s an especially exciting prospect considering the Jets already have some nice pieces on both sides of the ball. More importantly, Douglas brings a winning mentality that the Jets desperately need, especially given their current playoff drought. Just check out this quote from his press conference.

It certainly is and that mindset will serve well for a team looking to establish itself as a force to be reckoned with in the AFC for the first time in nearly ten years. It may be a while before we see just what Joe Douglas is capable of in his position, but one thing’s for sure; gang green has a lot to look forward to over the next several years.