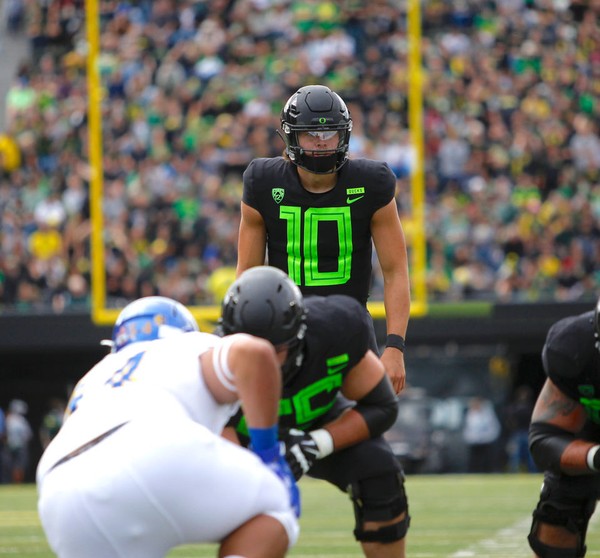 For a conference that dubs itself “The Conference of Champions,” the Pac 12 has had quite a bit of trouble getting representatives in the College Football Playoff. Since the playoffs inception in 2014, the conference has sent a team just twice, the fewest of all the Power 5 conferences. However, there’s talent in the Pac 12 that may have what it takes to buck the trend. Let’s take a look at what the conference has to offer up North.

The Ducks have arguably the best quarterback in the country in Justin Herbert, plus a great dual-threat running back in CJ Verdell. Though they lose Dillon Mitchell, Oregon returns the majority of their receivers, including TE Jacob Breeland.  Kayvon Thibodeaux has what it takes to make an immediate impact and will join a defense with a secondary led by Thomas Graham Jr. and Jevon Holland.

The Cardinal have a favorable schedule and a great quarterback in K.J. Costello to lead the way. The defense has guys like Paulson Adebo and Frank Buncom to patrol the secondary with LB Gabe Reid leading the front seven. However, they’re losing too much talent on the offensive side of the ball and I think it will keep them from competing for a conference title. That being said, Stanford still has the stuff to hang around in the top 25 for most of the year, if not the entire year.

After winning two of the last three Pac 12 titles, the Huskies are left trying to rebuild a roster that’s lost a lot of talent on both sides of the ball. Former five-star recruit Jacob Eason appears to be the front runner for the starting QB job, but nothing’s certain yet. Salvon Ahmed looks to be the next great feature back for the Huskies. As for the rest of the roster, they’ll need guys to step up and fast.

Replacing Gardner Minshew behind center will be no easy task, but the return of Washington State’s top three receivers should make things a bit easier. Max Borghi looks to be a threat for opposing defenses both on the ground and through the air. Jahad Woods leads the linebacker core while Marcus Strong leads an otherwise bereft secondary.

Though the Bears lose an offensive weapon in Brandon McIlwain, they still have a reliable option behind center in Chase Gabers, who threw for 1,506 yards and 14 touchdowns while rushing for 420 yards and two touchdowns. He may have to carry a heavy load on the ground as well with leading rusher Patrick Laird having left for the NFL. Jordan Duncan will lead a receiving core that’s lost a lot of talent.

Jake Luton will look to take over full time as the starting quarterback for the Beavers. He’ll have Isaiah Hodgins and Trevon Bradford to look for down the field. Jerome Jefferson looks to build on his 1,380 yard season as the team’s leading rusher. Jalen Moore and Sam Smith lead a defense ready to make some noise in the Pac 12 this season.