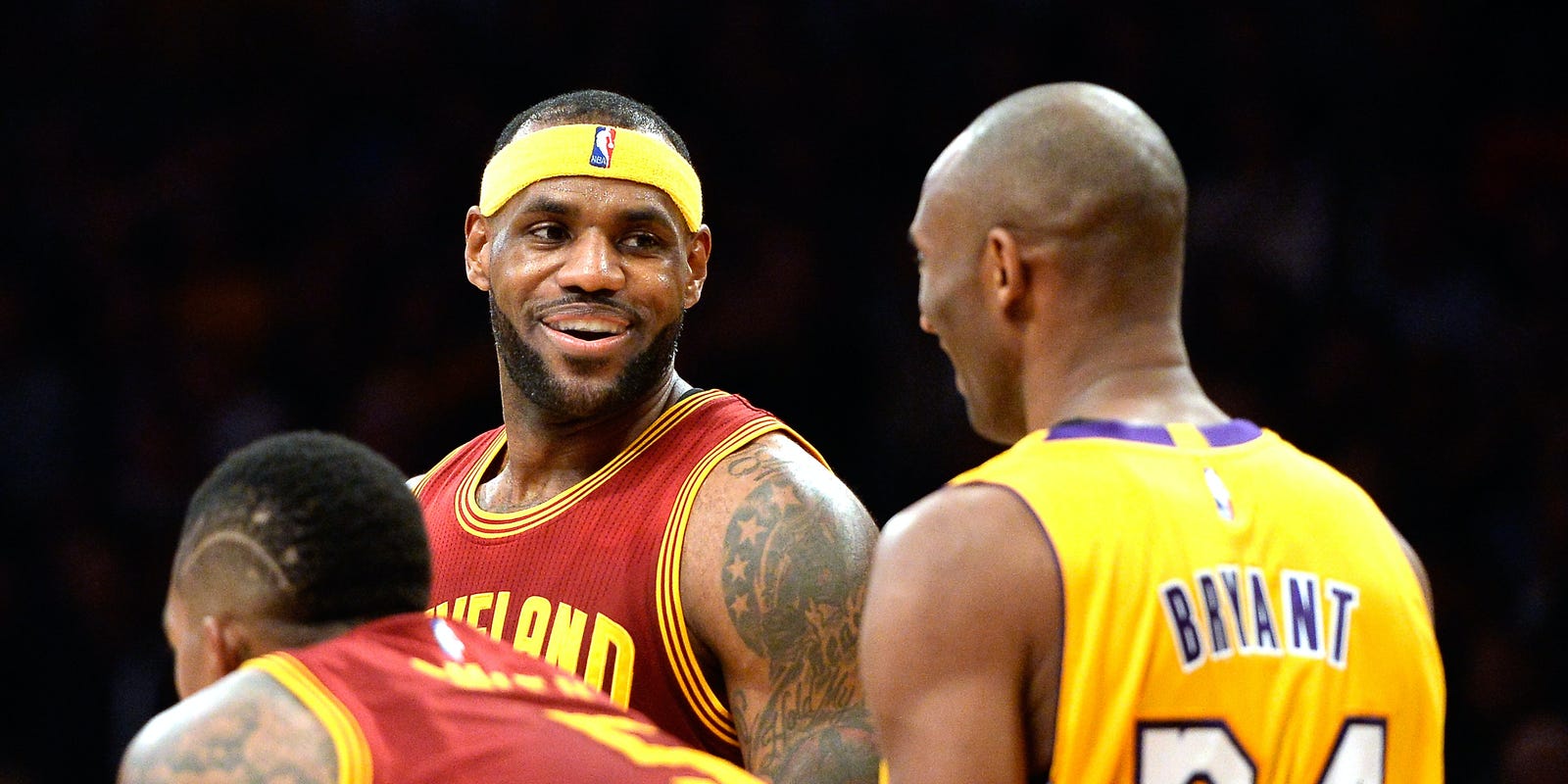 The NBA has seen many players and teams meet expectations – such as the powerhouse Bulls led by Michael Jordan, Scottie Pippen, and head coach Phil Jackson winning six titles. However, the league has seen many unfortunate circumstances where dreams end up not becoming reality. We’ve seen it time and time again: a key star player gets injured, traded, or retires before aspirations are met. You then think to yourself: “What if?”The NBA world has developed many “What if” theories on potential greatness that never lived up to its hype. Here is a list of the top 10 “What if’s” in NBA history

First order of business, one that has remained underground: Chris Paul to the L.A. Lakers. Paul, a longtime member of the New Orleans Hornets (now the New Orleans Pelicans), was traded to the Lakers and was ready to join forces with Kobe, until it was vetoed by then-commissioner David Stern. Due to the fact that the Hornets were owned by the NBA at the time, Stern – an owner of the franchise – was given this right. Instead, Paul ended up being traded to the other side of L.A.: the Clippers. With that, ‘Lob City’ was born. The Lakers lacked success in the playoffs in 2012 and ’13, and then struggled in the regular season ever since until 2019-20. Meanwhile, the Clippers became the new face of L.A. basketball, making the playoffs every year with CP3 until his departure in the 2017 off-season – although they never got past the Semifinals in their six straight playoff trips. With the success he brought to the Clippers, one must wonder: what could have happened if he played in the Purple and Gold instead? Could he, Kobe, Pau Gasol, and Andrew Bynum have had success? Would Blake Griffin still have been a star for the Clip’s without CP3? Would the Clip’s be a playoff contender? Maybe Paul should have played for both sides.

9. What if Kyrie never left Cleveland?

When LeBron James returned to the Cleveland Cavaliers in 2014, he was greeted by PG Kyrie Irving and newly-acquired PF Kevin Love, forming a “Big Three” in Believeland. After appearing in three straight finals from 2015-17 – winning 2016 in the process – Irving was famously traded to the Boston Celtics in exchange for PG Isaiah Thomas, who’s short-lived tenure in Cleveland ended when he was traded to the Lakers in mid-season 2018. After playing the 2018 season without Kyrie through his Finals defeat, LeBron left Cleveland to sign with the Lakers. Several things to consider about Kyrie’s exit: if he stays, does LeBron stay? Do the Cavs win another championship? Does the team possibly add more star depth to their lineup? Could have, would have, should have.

8. What if the Blazers drafted MJ?

The Portland Trail Blazers had the second overall selection in the 1984 Draft. They selected center Sam Bowie – who played in just four seasons with the team and missed the 1987-88 season due to injury. He averaged just 10.5 PPG and 8.1 RPG in only 139 games in Rip City. He ended up playing 11 seasons in the NBA; averaging 10.9 PPG and 7.5 RPG for his career in 511 games played. Going back to the Draft, the Chicago Bulls had the very next pick, and they selected Michael Jordan who ended up creating arguably the greatest NBA legacy of all time. So what if the Blazers drafted MJ? Would he guide Portland to at least one championship? Would the Bulls ever have gotten recognition without Jordan? Either way, the Blazers will regret not drafting this basketball icon for a long time.

7. What if the Hornets kept Kobe?

The Charlotte Hornets selected Kobe Bryant with the 13th overall pick in the 1996 Draft but ended up trading him to the Lakers in exchange for longtime Laker: center, Vlade Divac. Divac lasted just two seasons in the Blue and Purple, scoring 11.7 PPG, 3.3 APG, and 8.6 RPG. Meanwhile, Kobe as we all know became arguably the greatest scorer this game has ever seen; averaging 25.0 PPG, 4.7 APG, and 5.2 RPG while shooting a career percentage of .447. If only Charlotte did not trade him. Would he have brought the perennial playoff-contending Hornets a championship? In regards to the Lakers, would Shaq still be in Purple and Gold after 2004? The Hornets and their fans were sure punching the air upon witnessing greatness from the shooting guard they gave up. Rest in peace, Black Mamba.

6. What if Harden never left the Thunder?

After the Thunder lost to the Heat in the 2012 Finals, Harden was traded to the Houston Rockets. The former third pick in the 2009 Draft became an MVP-caliber player upon arriving in Houston, which led many people to think: what if he stayed in OKC? Would he still be an MVP candidate? But the biggest question of all: could the Thunder have been a dynasty? As an NBA fan, I say absolutely; they could have hoisted the Larry O’Brien Trophy at least twice. On top of that, it would have changed the NBA up to today, and given the Warriors some added competition. Instead, many kids in the future will see a group photo of Harden, Kevin Durant, Russell Westbrook, and Serge Ibaka, and think it’s photoshopped.

5. What if Kobe and LeBron played in the Finals?

LeBron may have owned the regular season head-to-head match-ups with Kobe 16-6, but that does not even come close to telling the whole story. Plus, that 10-game margin should have been tighter had the Lakers still been great towards the end of Kobe’s career. And now, one of the most unfortunate circumstances in the history of sports: when Kobe appeared in the Finals for the final time in 2010, LeBron went on his eight-year Finals streak beginning the following year. Just. Too. Late. Let’s look at two scenarios. Scenario 1: had the Cavs gotten past the Magic in the 2009 Eastern Conference Finals, we would have seen a match-up for the ages: LeBron vs. Kobe. Scenario 2: had the Lakers advanced past Dirk’s Mavericks in the Western Conference Semifinals, and KD’s Thunder in the Western Conference Finals, the 2011 Finals would have featured two legends: Kobe and LeBron. Who would have won? How many acts could there have been between the two? Would Kobe have more than 5 rings or less? Would LeBron have more than 3 rings or less? This dream Finals competition could have been an instant classic from beginning to end, but instead we are all left to sit and wonder.

4. What if D-Rose never gets hurt?

This one has remained pretty popular since the mid-2010s. In the 2012 Eastern Conference 1st round, Rose’s #1 seeded Chicago Bulls played against the #8 seeded Philadelphia 76ers – led by Andre Iguodala. With over a minute left in regulation in Game 1 – and the Bulls maintaining a 99-87 lead – the defending MVP tore his ACL on his way to the basket. He was taken off the court, and missed the rest of the playoffs – which the Bulls lost 4 games to 2 in the series – and also sat out the entire 2012-13 season. Ever since, staying healthy became a chore for Rose as he has played 60+ games in only 2 seasons since his ACL injury. This draws many ‘What if’s’ had he stayed healthy. Even then, what if he was taken out of the game that was surely decided? Would he have still played in his MVP form? Could he be a HOFer? Could the Bulls have won the finals in 2012 or ever? Could they still have been top of the East? Or even then, does he still play for the Bulls today? Though his career is not over, it has proven to be one of the biggest ‘What if’s’ of all-time.

3. What if Durant never left OKC?

You probably knew this was coming after Harden, and you guessed correctly. We all know the story: the Thunder lose to the Warriors in the 2016 WCF, and Durant pulls a ‘snake’ move by signing with Golden State in free agency that off-season. Choosing to dip out of OKC to a team that had just won an NBA-record 73 games not only drew much scrutiny but erased many possible outcomes: could the Thunder have taken down the Warriors in the future? Would the Warriors still rule the West? Could the Thunder have beaten LeBron and the Cavs? Most fans would’ve loved to see almost all the above, but it will only forever live in thought.

The biggest snake move before the aforementioned snake move, LeBron decided on ESPN’s program The Decision that he would leave Cleveland to sign with the Heat – becoming allies with Dwyane Wade and Chris Bosh, thus forming a superteam in South Beach. The Heat made four consecutive Finals appearances from 2011-2014 – winning in 2012 and 2013. Meanwhile, the Cavaliers – suddenly going from 60+ wins in their last two seasons with LeBron – fell to a 19-63 record the following season, and drafted Kyrie Irving first overall in the 2011 Draft. The Cavs have managed to win 30+ games only once until The King returned in the 2014 off-season. One thing is obvious: if he didn’t leave, fans wouldn’t have burned his jerseys. But on a bigger note, the Cavs probably could have won a title had he stayed. But would Kyrie have been drafted by Cleveland? Would the Heat have been good with just D-Wade and Bosh? Could the Cavs have continued to dominate and possibly attract more talent? All may be forgiven in 2016, but that does not alter any of the potential positive outcomes for Cleveland that never happened.

1. What if LeBron and Jordan played each other?

The biggest debate in all of basketball: LeBron or Jordan? MJ retired at the end of the 2002-2003 season – closing a career that brought himself into the GOAT conversation, and you can only guess who was drafted the very next year. If only Side B of the conversation was older than 18 at the time. Two ’23’s’… Two candidates from different generations… The greatest legacy vs. the best all-around player… Had these candidates played each other in their prime, who would have won and settled the GOAT debate once and for all? We’ll probably find out how many licks it takes to get to the center of a Tootsie Pop before we know the answer. And now a surprise honorable mention:

What if Kobe and MJ played in the Finals?

I just could not finish without including the battle of the shooting guards. A championship match-up between these two would have been beneficial to the winner and detrimental to the loser. Two seasons after Jordan’s final appearance in the fight for the O’Brien Trophy, the Finals welcomed Kobe to the stage for the first time in 2000. Oh, so close! But what if they had faced each other? Would Jordan have 7 rings? Would Kobe have 6? Who adds to their legacy? The top two SG’s in NBA history… two tier-3 GOAT subjects… who wins?