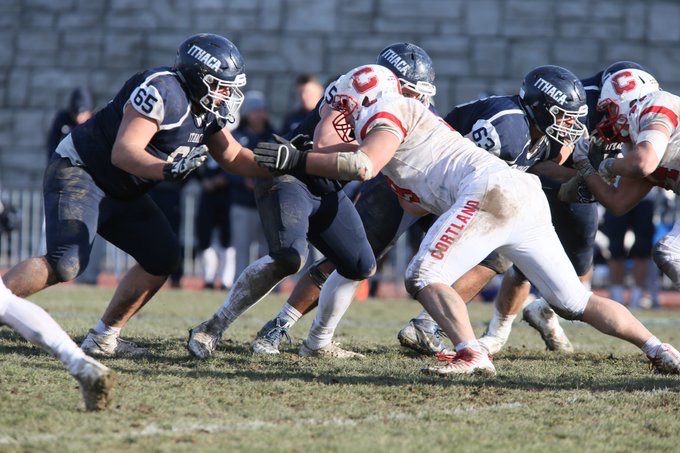 Let me tell you about a little game called The Cortaca Jug.

Every year in the middle of November, the Ithaca College Bombers and the SUNY Cortland Red Dragons (hence the name, Cortaca) convene in one of the greatest rivalries Division III football has to offer. Over 60 minutes, the two compete for a small jug, which was purchased for $2 back in 1958 before that year’s contest. Today, it serves as a license for bragging rights that the winner will hold over the course of the year to follow.

Once dubbed “the biggest little game in the nation” by Sports Illustrated, the Cortaca Jug has seen much being put on the line in its illustrious history. Between 2002 and 2016, the conference champion for the Empire 8 was one of these teams on seven occasions. It’s also been home to some of the most dramatic events in football. Just ask the 1991 Ithaca Bombers, who,after losing to Cortland in the regular season, knocked them off in the first round of the NCAA Tournament en route to a national championship. Just ask the 2014 Cortland team, who trailed by three points with three seconds left in the game before this happened.

I’ll admit, there’s quite a bit of bias behind this piece, especially coming from a student at Ithaca. However, you don’t have to be from either school to understand the hype going into this year’s matchup.

In honor of college football’s 150th anniversary, this year’s Cortaca Jug will be played at MetLife Stadium. The relocation is also in an effort to become the most-attended game in the history of NCAA Division III football. Previously, the record was 37,355 people for a game between St. John’s and St. Thomas at Target Field. It didn’t take long for Cortaca to one up that.

This year’s contest has what it takes to prove itself worthy of the venue. The Red Dragons head into the game with a real chance at earning an at-large bid to this year’s NCAA Tournament. The offense is led by four-year starter Brett Segala accompanied by Zach Tripodi in the backfield. Segala’s targets include Cole Burgess, Jason Carlock, and Angelo Foster, who each have at least five touchdowns on the year. Their head coach is Dan McNeil, who began his coaching career at Ithaca College as a graduate assistant in the early 1980’s.

Though they don’t have as high a chance to make it to the tournament, the Bombers have what it takes and more to make this an interesting contest. Their offense is led by transfer quarterback Joe Germinerio, who leads an offense that averages 40 points per game. His targets include Andrew Vito and Will Gladney, who could read Hamlet five times over and still make a behind-the-back catch in the corner of the end zone. The team’s head coach, Dan Swanstrom, who has yet to lose a Cortaca Jug in his three years at the helm.

So when you talk about some of the greatest rivalries in college football, remember this. The best rivalries don’t always have to be the biggest.