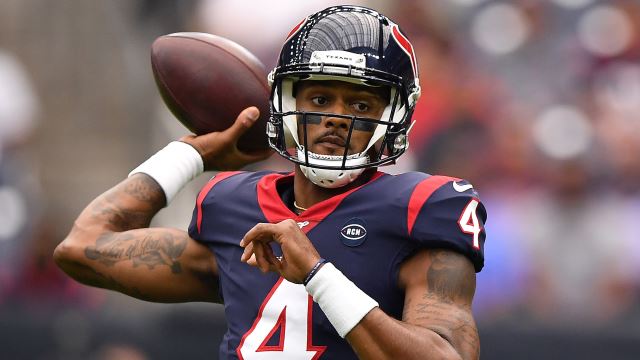 The Texans will greatly miss the presence of their top-tier WR DeAndre Hopkins – especially QB Deshaun Watson. Paradoxically, Watson will prove that he can perform better without the 3x All-Pro wideout. There are two questions with answers that support this line of thinking, and here they are…

First question: did Watson NEED Hopkins to prove his Pro Bowl talent? No, but maybe in the beginning. Now don’t get me wrong, Hopkins helped Watson succeed in the NFL immensely, earning him two Pro Bowl nods in 2018 and ’19. However, it is wrong to say that Nuk was the SOLE purpose for the QB’s rise to stardom.

Don’t forget: Watson has dual-talent capabilities; he is a QB who can throw for at least 4,000 passing yards and 25 touchdowns seasonally, but he can also perform well in the run game. Since 2018, he has 964 rushing yards in 31 games, and his longest runs for the last two seasons were 34 and 30. He finished third in rushing yards by a QB in 2018 and fourth in 2019, while in that span averaging 31.1 per game. But that’s not all: last season, he finished with a career high in rushing touchdowns with 7 – tying Lamar Jackson for second in the league by a signal caller.

And with that, let’s answer the other question…

Why will Watson improve without Nuk?

As stated in PFF’s video, because Watson will no longer have the “when in doubt, throw to Nuk” option, he now has to try and locate the most open receiver, and he’s got a pretty solid core to work with.

A deep threat throughout his career, the fifth-year Texan aims to be Watson’s Number 1 target in the 2020 season. The only issue for Will Fuller is his health; he has not played a full season in his first four years in the NFL (missing 22 out of 64 games in his career). However, he has shown to make up for his limited playing time. Playing only 11 games last season, he set personal bests in receptions (49) and receiving yards (670), passing those he had in his rookie season (47 receptions for 635 yards). He managed to do it in three fewer games! If Fuller can stay healthy, imagine what numbers he’ll put up in 16 games….

Kenny Stills’ recognition grew during his tenure in Miami from 2015-2018, but he was never viewed as a No. 1 receiver. He was overshadowed both in Miami by the talent of Jarvis Landry, and also in his first two years with the Saints, when his performance was masked due to the presence of Brandin Cooks and Jimmy Graham. Like Fuller, Stills is a deep-threat who has averaged at least 14.0 yards per catch in all seven seasons of his career, and has had a season-long 70-yard reception in three seasons. Now with Hopkins out of the picture, expect to see more activity from Stills – who is looking to improve off of a campaign in which he recorded 40 receptions for 561 yards and 4 touchdowns.

One-time Pro Bowler Randall Cobb spent eight years as a member of Aaron Rodgers’ unit from 2011-2018 and with Dak Prescott last season. Though not a consistent deep threat throughout his career and only averaging 12.1 yards per catch, Cobb can always find a way to get open. He’s been a reliable piece to both receiving units he’s played on, and what he brings with him to the other side of the Lone Star State is his ability to test any defense with his route running skills. Get ready to watch him fly by more opponents in 2020.

Rounding off the receiving core, we got another newcomer: previously mentioned Brandin Cooks. The seventh-year wideout is coming off a rough year with the LA Rams in which he recorded 42 receptions for 583 yards, fresh off of posting 80 catches for 1,204 yards in 2018. Cooks, however, recorded four consecutive 1,000-yard seasons from 2015-18 for one reason: he gets the ball. When he gets the ball, he does damage – that simple. Last year was just a bump in the road for the speedy 26-year-old veteran, and now starting a new leaf with a new talented QB in Watson, he will see himself turn the corner and make himself at home. It’s comeback season for Cooks and he’s ready!

Watson will continue to grow with his new receiving unit, but he will mainly show that he can play better without Hopkins by his side.