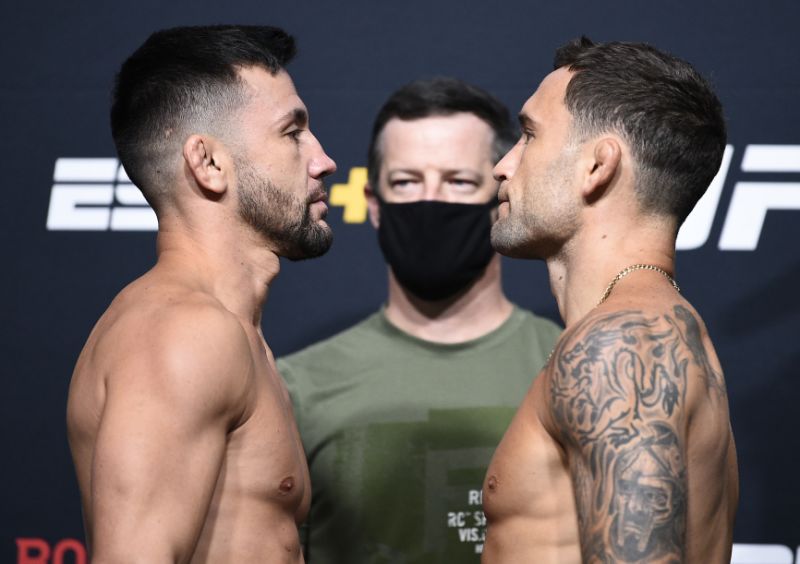 Brazilian bantamweight contender Pedro “The Young Finisher” Munhoz takes on former lightweight champion, and UFC legend Frankie “The Answer” Edgar, who will be making his bantamweight debut. Munhoz is coming off a unanimous decision loss to Aljamain Sterling while Edgar is coming off of back-to-back losses to Max Holloway(unanimous decision) and Chan Sung Jung(KO/TKO). Munhoz the #5 ranked bantamweight acknowledges that Edgar is a legend, but says it is his time right now. Edgar believes he still has what it takes to make a run for the title in a new division. There were questions about Edgar’s weight cut, but he was able to make weight comfortably and  looked sharp at the weigh ins. Munhoz will look to keep the fight standing but will have no problem if Edgar takes him to the ground because of his phenomenal submission skills. Edgar will look to do what he always does, use his striking and then look for takedowns. He will want to keep Munhoz guessing the whole fight. Edgar has described this fight as a “battle of wills” and it will be fascinating to see who comes out on top.

Munhoz vs. Edgar over 3.5 rounds (+105)
The bantamweights will be very fast and skilled and this promises to make an exciting fight. The younger Munhoz will throw more strikes and depending on how Edgar’s chin will hold up, which I believe it will, this fight will go over 3.5 rounds.

Saint Preux to win (EVEN)
The veteran Ovince Saint Preux will look to take Alonzo Menifield to the ground and control him. Menifield has unbelievable power but gasses out after the early goings. If Saint Preux can make it out of round 1, and avoid Menifield’s power punches, he will win the fight. Hopefully we get to see another Von Flue choke from Saint Preux.

Agapova round 1 (-140)
The heavy favorite Mariya Agapova has finished 7 of her 9 wins and 6 of them have come in round 1. She will dominate Shana Dobson who has won just 1 fight in the UFC and get her out of there early.

Watch the prelims at 6:00pm EST and the main card at 8:30pm EST on ESPN+. Great night of fights once again.