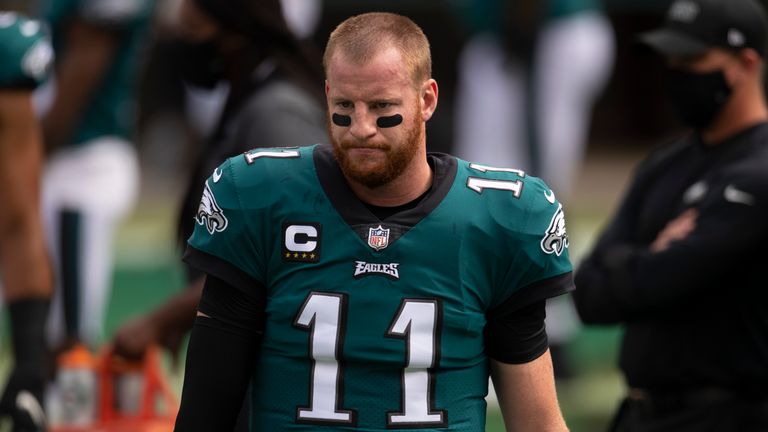 Right off the bat, it appears that Indianapolis has won the trade. Everyone knew Wentz was not going to last in Philly, but the details of this trade has many raising eyebrows. The Colts received gold in exchange for a bag of chips. Here is why the Eagles lost and the Colts won:

Why the Eagles Lost

The Eagles clearly have their eyes set on Jalen Hurts for the future; therefore, it was time to move on from Wentz. It made the most sense to ship him out to Indy with Philip Rivers retiring, but the details of the trade – as well as the circumstances – are what put Philly on the bad end of this lopsided trade.

First and foremost, the Eagles only got two draft picks in exchange for their once-believed franchise quarterback. TMZ Sports perfectly described what Philly got in return: a bag of peanuts. The only way this could be worth it is if Philly uses these two picks on a defensive back and defensive end as both units showed ineptitude last season from injuries to starters and ineffective play from their reserves.

Second, Wentz now owns the record – previously held by Jared Goff – for largest dead cap charge in NFL history with $33.8 mil; Goff was responsible for $22.2 mil when he was dealt to the Lions in the Matthew Stafford trade. In short, the Eagles set themselves up for eventual failure before Wentz even became a topic of trade rumors thanks to his four-year $128 mil contract extension. They are now paying a huge price for their lucrative deal.

Why the Colts Won

Upon the acquiring of Wentz, Indianapolis will have their fourth starting quarterback in just as many seasons (Andrew Luck in 2018, Jacoby Brissett in 2019, Philip Rivers in 2020). Wentz will have a young, talented offense to work with T.Y. Hilton, Michael Pittman, and rising star Jonathan Taylor – a mega upgrade from his woeful Philadelphia offense with the exception of Zach Ertz and a healthy Alshon Jeffrey.

More importantly, this trade reunites him with former Philly offensive coordinator Frank Reich, who left the team following their Super Bowl LII victory to pursue the Colts’ head coaching job. The offensive genius he is, Reich can not only save Wentz’s career, but the two can turn this team into an eventual Super Bowl threat much like they did in tandem with the Eagles.

The only concern, however, is Wentz’s lack of playoff experience; he made only one appearance in the Eagles’ NFC Wild Card loss to the Seahawks in the 2019-20 playoffs when he suffered a concussion from a brutal hit by Jadeveon Clowney. On the bright side, this should not be a major concern given Wentz’s aforementioned upgraded offense which will help him grow into the playoff performer he is meant to be.

In conclusion, the Colts overwhelmingly came away as the winners of this trade while the Eagles are left to rebuild after having a once-promising future that turned into a epic debacle. Don’t be surprised if the Colts have a few Super Bowl runs in the near future.