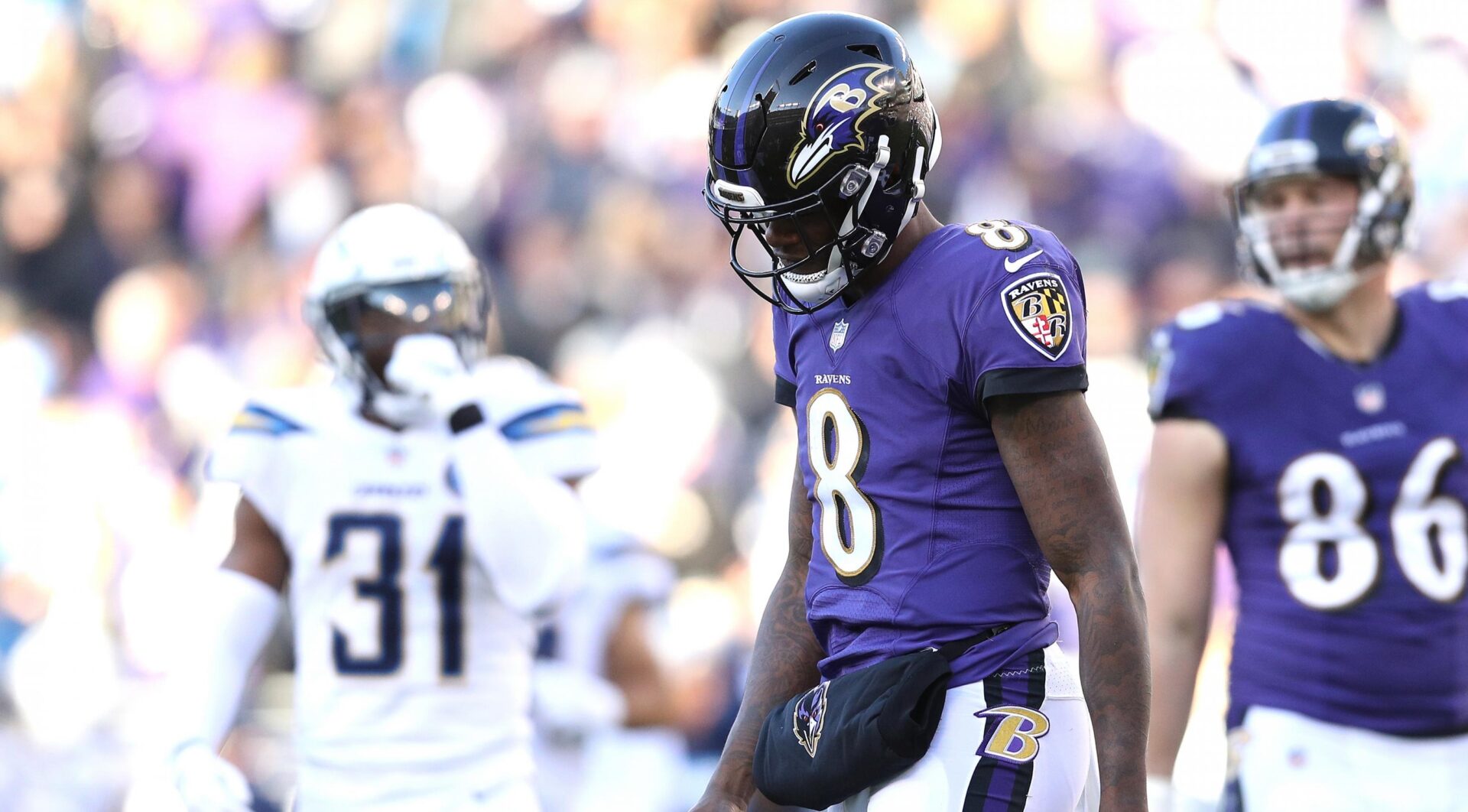 As the old saying goes: there is no “I” in team. In addition to having a young MVP QB in Lamar Jackson last season, the Baltimore Ravens (who finished atop the league with a franchise-best 14-2 record) also had an NFL-record thirteen players selected to the Pro Bowl. This season has been a different story for the Flock, however, as they see themselves atop the playoff hunt as the eighth seed in the AFC, and third place in the AFC North. Why the sudden drop? Is it too late to turn the tables?

First, it is important to go over what went wrong for Baltimore up to this point. With the exception of the team’s run game – which ranks best overall – the offense has not had the same mojo as they did last season. Why?

This season, we have seen a different presentation from the Ravens’ offensive line in the passing game compared to last year’s dominant showcase, and one sign that is worth noting is that Jackson now has a career-high in sacks (28) – five more than last year’s total. Reason being?

The retirement of eight-time Pro Bowler and thirteen-year veteran guard Marshal Yanda following the conclusion of last season created a gaping hole in the O-Line. To add insult to injury (no pun intended), the team lost All-Pro tackle Ronnie Stanley to a season-ending injury in their Week 8 28-24 loss to the Steelers; the Ravens (who were 5-1 prior to his injury) lost three of their next four games. However, with the line having protected Jackson in the Ravens’ last two drives that led to a go-ahead 44-yard touchdown pass and a game-winning 55-yard field goal late in their 47-42 thrilling victory over the Cleveland Browns, there looks to be hope for the unit heading into their closing three-game stretch.

It poses without a shadow of a doubt that COVID has taken a huge toll on the team. Their worst debacle was in Week 11 when Lamar Jackson, Mark Ingram, Mark Andrews, and Willie Snead tested positive before Baltimore’s 19-14 loss to the Steelers – which got pushed back three times as a result. Yet, a final score that close can only make one think: what if they all played.

Thankfully, all have returned. But now…

Another member within the Ravens organization tested positive and three wide receivers – notably Jackson’s top gun Marquise Brown – were listed as close contacts. All three are now on COVID/reserve, a designation which the team has now seen a total of 29 players since their outbreak began in November. Hopefully, all the wideouts test negative until they can play in Sunday’s matinee with the Jaguars.

On a brighter note, the Ravens (8-5) have won back-to-back games following their costly three-game losing streak that dropped them down to third place in the AFC North. Coming into Week 15 fresh off their Monday night comeback against the second-place Browns (9-4), they see themselves right behind Tua and the Dolphins (8-5) – who hold the tiebreaker of better record in the AFC – in playoff seeding. As they close out their regular season playing the Jaguars, Giants, and Bengals, expect to see a soaring Lamar & Co. give Miami and Cleveland a late run for their money.