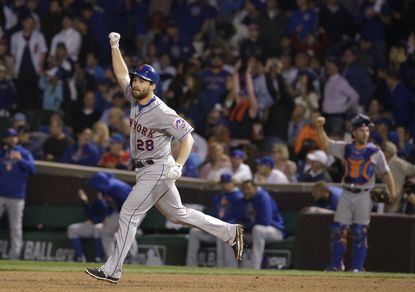 The 2013 Pittsburgh Pirates broke into the playoffs for the first time since 1992 by earning a Wild Card spot after winning 94 games in the regular season. This was also their first winning season in those 21 years. Andrew McCutchen led the way for the Bucs with a .317 average, 38 doubles, 27 stolen bases and 84 RBI, good enough to win him the National League MVP award. Pittsburgh was also helped by Pedro Alvarez’s 36 homers and 100 RBI, Francisco Liriano’s consistent 3.02 ERA, and Jason Grilli going 33/35 in save opportunities, despite being injured for a part of the season. The Pirates hosted the 2013 NL Wild Card game, and their fans brought the thunder, helping them defeat Cincinnati 6-2. Unfortunately, their miracle season ended shortly after that, losing in 5 games in the NLDS to the eventual NL Champion St. Louis Cardinals.

The 2010 Reds had one of the best offenses in baseball, and won the NL Central with just 91 wins on the season. Youngster first baseman, Joey Votto had a career year batting .324 with 37 homers and 113 RBI. This resume was good enough to award him as NL MVP for 2010. Brandon Phillips and Scott Rolen stayed smooth defensively, winning gold gloves at 2nd and 3rd base, respectively. Both also helped on offense, Phillips posting a .275 average and 33 doubles, and Rolen, a .285 average and 20 home runs. Jay Bruce was another offensive juggernaut, hitting 25 home runs. Bronson Arroyo led the pitching staff with a 17-10 record and a mediocre 3.88 era. Johnny Cueto was in his 3rd MLB season and went 12-7 with a 3.64 ERA. Unfortunately for the Reds, they faced the Philadelphia Phillies in the NLDS, and Cy Young winner, Roy Halladay in Game 1. Halladay threw the 2nd ever no-hitter in postseason history, shutting down the Reds incredible offense. Cincinnati wasn’t able to recover and was swept by the Phightin’ Phils.

The 2011 Milwaukee Brewers had exactly what the 2 previous teams had: The NL MVP on their squad. Left Fielder Ryan Braun took home the hardware after batting .332 with 33 round-trippers and 111 RBI. His main sidekicks were Prince Fielder and his 38 home runs and 120 RBI, Nyjer “Tony Plush” Morgan’s .304 average, and Corey Hart’s .285 average and 26 homers. On defense, the Brewers were helped out greatly by offseason trade acquisition and former Cy Young winner, Zack Greinke, who went 16-6 on the season. Starting Pitcher, Yovani Gallardo also posted 17 wins, and closer, John Axford converted 46 of 48 save opportunities. Milwaukee won the NL Central by going 96-66, but ultimately lost in 6 in the NLCS to the soon-to-be-named champions of the world, the St. Louis Cardinals.

The 2015 Toronto Blue Jays had a star-studded roster when they won the AL East with 93 wins. They made big trade-deadline moves, acquiring shortstop Troy Tulowitzki from Colorado, and starting pitcher David Price from Tampa. Donaldson, Bautista, and Encarnacion were threats at the plate all season, each hitting upwards of 35 home runs on the year. David Price and Marcus Stroman helped the team down the stretch and into the playoffs. MLB fans were given one of the best moments in recent postseason history with Jose Bautista’s moonshot and bat-flip into oblivion. The Jays, like the Brewers, were defeated in 6 games in the League Championship Series, losing to the eventual world champs that year, the Kansas City Royals.

The 2015 Mets came the closest to victory out of the teams previously mentioned. The Mets had what it took to win it all, and just fell short to the Royals. To get there, New York won the NL East with a 90-72 record. Their starting rotation could go toe-to-toe with anyone in the league. Jacob deGrom went 14-8 with a 2.54 era in his 2nd big league season. Matt Harvey went 13-8 with a 2.71 era after returning from Tommy John, and Noah Syndergaard, in his rookie season, went 9-7 with 166 strikeouts. Three players led the charge offensively, the main name being Daniel Murphy, who most notably hit a homerun in 6 straight postseason games, setting an MLB record. The Mets also had a great outfield, with Curtis Granderson batting leadoff a majority of the season, hitting 33 doubles and 26 home runs. New York also acquired Yoenis Cespedes from Detroit at the deadline, and he shined from the start, batting .287 with 17 homers and 44 RBI in just 57 regular-season games. In the pen, Jeurys Familia was the Mets go-to man, tying the franchise record for saves with 43, but ultimately blew 2 saves in the World Series, when they lost in 5 games to Kansas City.

Look out for teams 5-1 coming soon…