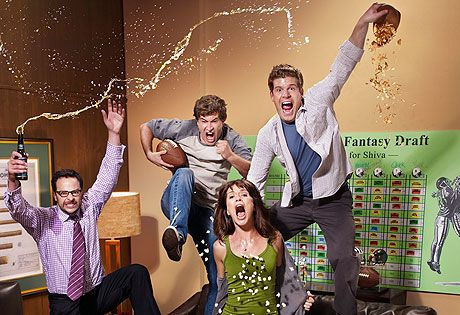 Every Fantasy Football league is currently out there looking for a unique and fun way to decide their fantasy draft order for this upcoming season, but it’s not easy brainstorming an idea that is both unique and fun. Here, in no particular order, I will give you some ideas to help you make your league’s draft pick selection process more enjoyable.

This only applies if none of your league members are actually good at bowling. Bowling gets all members of the league together and is guaranteed to be a fun night of talking football, competing, and a little bit of chirping back-and-for. Top score gets first priority in picking their draft position and so on.

Update: Covid-19 may not make this possible.

Each league member constructs their own airplane and then lets it fly as far as physically possible. This is honestly one of my favorite ideas, it’s virtually free and takes about 10 minutes to complete. BBQ and paper-airplane race? Nothing better.

Absolutely no skill required. Just let the commissioner randomly select a horse number in an online race and assign one to each member and then gather the boys to watch the most intense and important horse race of all time.

Line the members up on the line and GO! This might not work for all leagues depending on athletic ability, but if you have 10 members with beer-bellies this could be very interesting.

Let’s get one thing straight first, if you decide to do this idea I am not responsible for any league members drowning. Now that that’s cleared up; get the league members in the pool and use a phone or stopwatch to see who can stay underwater the longest. Just picture 10 men in a pool together virtually drowning themselves for first overall pick. #DrownForSaquon

Set up a Madden tournament or do a Mario Kart race. This is a super fun and competitive way to decide draft order, but if any league members are elite at the game you select it just wouldn’t be fair.

Break out the booze and red solo cups and use beer pong, flip cup, or some other drinking game to decide your fantasy draft order. Deciding to use drinking games gets all league members together and is guaranteed to create a great night.

Forget the boring standardized test we all took growing up, it’s time to take a test that will truly decide your fate. Your fantasy fate. The Wonderlic Test is used by NFL teams to determine players intelligence off the field. Highest score gets to choose where they want to select.

Betting on a Sporting Event

Choose a random sporting event such as a Nascar race, the HR derby, or the NCAA March Madness tournament and randomly generate an order for each league member to pick a team or player. Once each member has selected who they want it’s time to cheer on that team or player like never before. A no cost and low effort option.

I stole this one straight from “The League” but at a family or friend BBQ have the league members come over and get the kids on the line and make them race. Each member chooses which child they want. Your draft fate is decided by kids racing…classic.