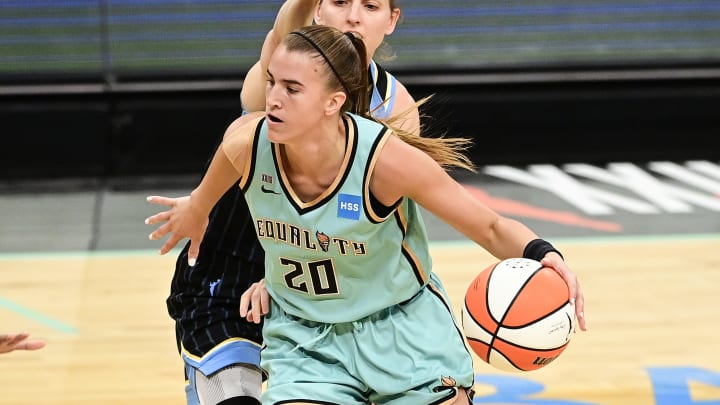 Following their upset loss to the Indiana Fever last Friday, Sabrina Ionescu, Betnijah Laney and the New York Liberty were hoping to end their first half on a positive note. Alas, a sloppy first and third quarter dashed those hopes as the team was no match for Jonquel Jones and the Connecticut Sun. Here are the main takeaways from their crushing defeat:

The New York Liberty got off to a rough start in the first quarter, scoring just 12 points while led by rookie Michaela Onyenwere with 4 points. New York finished 3/15 from the floor in the period and trailed 22-12. The Liberty showed improvement in the second period, scoring 16 points on 5/12 shooting and headed to locker room down 37-28. One of the main factors that hurt the Liberty in the first half was Connecticut’s defense which forced seven turnovers for 10 points. The Liberty on the other hand only forced two turnovers in exchange for three points in the entire half. However, their main Achilles’ heel was the inept shooting, mainly their showing in the first quarter which would set the tone for the rest of the game.

Thanks to the Sun defense, the third quarter was a disaster for the Liberty. On top of scoring just nine points, the Liberty shot just 3/15 from the floor with their last two buckets coming in the final minute of the period. Scoring their first points on a Sami Whitcomb three-pointer 1:15 into the period, the team went scoreless for 7:48 until Kylee Shook drained a three-pointer of her own with 57.2 remaining. The Sun went on a 16-0 run in that time frame and allowed 12 straight missed shots by the Liberty. By the end of the third quarter, the Liberty not only trailed 55-37, but they also had fewer total buckets (11) than turnovers (13). New York scored 17 points in the fourth – their most quarter points in the game – but their last-minute efforts fell well short of a comeback win. New York finished the second half shooting 9/29 and 17/56 (30.4%) in the contest.

Sabrina Ionescu and Betnijah Laney struggled again, combining for just three points on 1-13 shooting and 1-7 from downtown, albeit collected 11 rebounds. Laney scored her only bucket with a three-pointer in the first quarter. As New York’s star players, the duo must use their month-long break to recuperate and turn their play around if their going to guide their team to the playoffs.

On the Bright Side….

Despite their dreadful defeat, there were a few players that stood out in today’s game. After going scoreless for the first time in her career in last Friday’s defeat, Michaela Onyenwere rebounded by scoring 12 points on 3/7 shooting, and collected four rebounds against the East’s top seed. With the WNBA now on pause for a month, Onyenwere currently sits as the likely favorite to win Rookie of the Year.

After setting career highs last Friday, Kylee Shook picked up where she left off, setting new career highs with 16 points on 6-8 shooting and drained four three-pointers on five attempts. Despite finishing off her first half strong, her team could not provide a win to show for her two outstanding performances. However, Shook is determined to keep her hot streak going in the second half and provide victories for her team.

As for the bench, Reshanda Gray continues to stand out amongst her reserve teammates, scoring eight points on two surprising three-pointers and added four rebounds. Despite falling short of another 10+ point game, Gray led the bench in scoring for the fourth straight game since being re-signed by the Liberty on Jul. 1.

The New York Liberty will sit at 10-11 for the next month with the All-Star break, Commissioner’s Cup, and Tokyo Olympic set to take place. Betnijah Laney and Sami Whitcomb will represent the Liberty in the All-Star Game festivities and Rebecca Allen will participate in the Olympics for the Australian National Team. The Liberty will return to action on Aug. 15 when they head to Minneapolis to play the Minnesota Lynx. Will they end up turning things around?