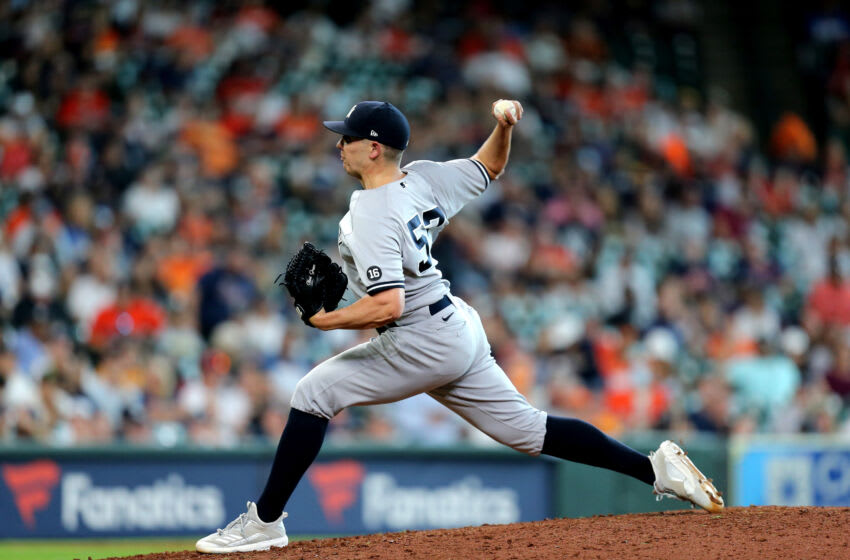 Anyone watched the Yankee game yesterday would understand the meaning of heartbreak. In another game that New York should have easily won, the Yankees took two steps forward and five steps back. Surrendering six runs in the ninth inning while squandering a comfortable 7-2 lead, anyone who has followed the Yankees all-season long would know that this is not their first occurrence… or second. With that being said, there are many pitching changes the Yankees need to make in the second half.

On Jun. 30 against the Angels, Aroldis Chapman went out in the ninth inning to close out the game in an 8-4 non-save situation. Recording only one out, he allowed three walks which gave the way for a game-tying grand slam off the bat of Jared Walsh. He was then taken out of the game and replaced by Lucas Luetge who allowed three more runs before the Yankees recorded their final out in the 11-8 defeat.

In Game One of a Jul. 4 double-header against the Mets – and with his team up 5-4 – Aaron Boone sent Chapman to the mound after controversially replacing Chad Green, who threw two pitches for 1/3 inning. Chapman allowed a leadoff game-tying home run to Pete Alonso; he then hit Michael Conforto with a pitch and walked Jeff McNeil before handing the ball over to Luetge. The latter allowed Conforto and McNeil to score and was charged for three more runs. The Yankees lost 10-5.

Lastly, in yesterday’s debacle, Domingo German entered his third inning in relief and allowed two men on before being replaced by the reliable Chad Green. With the Yankees’ luck, Green allowed two RBI doubles – the first of which scored German’s baserunners – and a single before Martin Maldonado lined out to shortstop Gleyber Torres for the first out of the inning. However, Jose Altuve finished the job by hitting a walk-off three-run home run, creating a moment of deja vu and sending the Yankees off the field in utter disbelief.

How Do The Yankees Solve This Problem?

First off, the Yanks need to make Chapman earn his closing role back. Back in April of 2019, Chad Green allowed 14 earned runs in 7 2/3 innings in his first 10 appearances before being sent down to Triple A Scranton. He was called up less than three weeks later to pitch in a low-leverage situation in which the Yankees led the Rays 7-1 in the ninth inning; Green struck out the side to end the game. Returning to the Yankees major league roster with a 16.43 earned run average, his season ended at 4.17. More importantly, from his return from the minors to his last game of the season, his ERA rested at 3.18.

Instead of sending Chapman down to the minors, the Yankees should place him in low-leverage situations in the eighth or ninth inning – last Sunday was the perfect opportunity – and eventually move him up towards his closing role to help him gain his confidence back. Until that time comes, Green should be the temporary closer. Yes, he recently displayed his own choke job more than 24 hours ago and has had a few others earlier this season. Unlike 2019, however, he has shown no signs of a major slump. If the 2019 experiment worked for Green, it can sure work for Chapman.

Second and more importantly, Aaron Boone needs to know when to take pitchers out and who to put in. Sure, there’s that fairly new MLB rule that pitchers must face a minimum of three batters before handing the ball to their skipper, except when they end the inning in three at-bats or less. However, the problem with Boone is that he will either let his pitchers suffer when they are clearly struggling, or he will send in a pitcher who is either not fit for a high-leverage situation or is in a slump. Boone had no reason to take Green out of the Mets game and replace him with a struggling Aroldis Chapman, for example. While knowing that German could possibly implode in any inning, Boone had no reason to let him in the ninth frame, even if he had a five-run lead and threw two shutout innings.

If Boone wants to keep his job, he needs to stick to a normal pitching routine. This would be the best routine to stick to: the starter for as long as he goes; Nestor Cortes (who threw 4 2/3 scoreless innings against Houston last Friday and has a 1.05 ERA) until the sixth; Luis Cessa (until Michael King or Jonathan Loaisiga return from the IL) for the seventh; Lucas Luetge (until Zack Britton or Jonathan Loaisiga return from IL) for the eighth; and Green (until Chapman regains his role) for the ninth.

In the first half, the Yankees – a team heavily projected to win the AL East – did not show that they could compete in October. The Yankees now have a four-day All-Star break to figure out how they can climb themselves out of the abyss they are currently in. Using logic, common sense, and sticking to the game plan will help guide them down the right path in the second half.

The Yankees currently sit 8 games behind the Red Sox for the AL East Division lead and 6.5 behind the Rays for second place. New York is also four places out of a Wild Card spot, sitting behind the Mariners, Blue Jays, and Indians who trail the #5 seed Athletics by 4.5 games or less. Sitting 4.5 games behind the Athletics, the Yankees are still in the hunt and they have 73 games left to prove themselves. There is no better time to prove their worth than their upcoming four-game series against the Red Sox on Thursday.