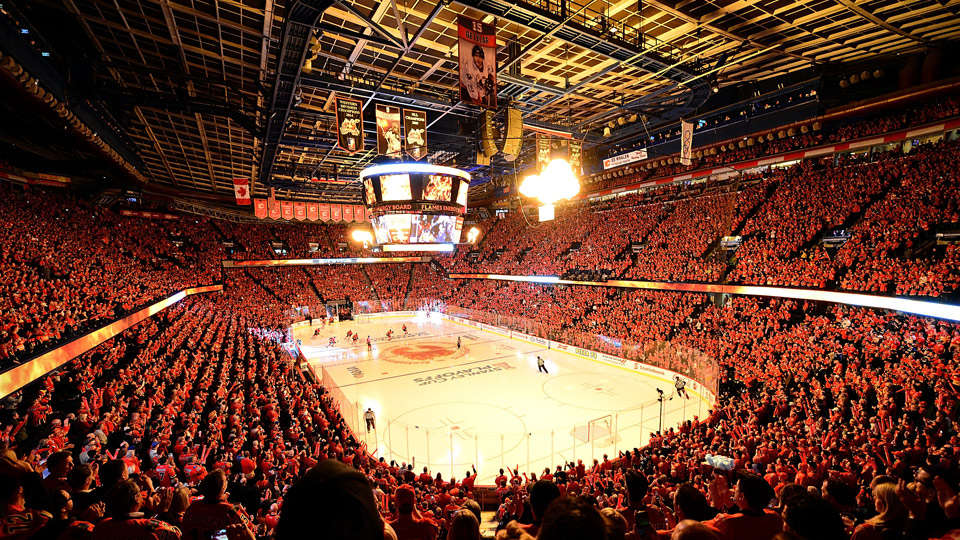 Fenty, you couldn’t be so stupid to write this blog, could you? Well here I am writing this blog, a blog I know that will receive push-back and criticism like no other blog every written before. But I had do to it…Every year going into the playoffs I always make note of how each teams home atmosphere is. Is it weird? Maybe, but at the end of the day a great crowd in a playoff series makes watching from home even better. So here’s my best crack at ranking the top atmospheres we are likely to see this playoff season…

#Bang. The most annoying thing to look at when watching a hockey game is when a fan behind the net holds up a sign throughout the entire game. Unfortunately, for the Dallas Stars fans, “that guy” happens to be in your home barn every. single. game. Besides “bang guy”, nothing stands out to me regarding the atmosphere in Dallas.

There is no doubt there is a new buzz going on down in Carolina among the fanbase. The storm surge and other extra curricular activities after the game have the crowd reinvigorated and quite honestly it’s great to see. This is one of the picks that is really based on the lack of exposure we have seen in the postseason from this franchise in recent seasons. I am willing to accept this atmosphere may slide down my list if the fans in Carolina party like it’s 2006, the last time the team won the cup.

Besides the cannon after goals and “CBJ!, CBJ!” chants throughout the game the atmosphere in Nationwide Arena doesn’t do it for me. If the Jackets pull off the ultimate upset against the Lightning and win their first ever playoff series then there’s a real chance for this barn to rock throughout the playoffs. It’s unlikely Columbus finds a way to win, meaning the atmosphere will be sub-par.

The “Shark Tank” as some call it, has been a recent destination for playoff hockey in the last 20 or so years. Despite the recent exposure nothing really sticks out to me regarding the atmosphere. Like St. Louis, the crowd is not going to be quiet, but it is not even going to be close to the likes of Winnipeg or Vegas. The immense pressure to win the cup now in San Jose will also lead to a lingering sense of anxiety throughout the building and that will add to some less than loud moments.

This may be a pick I could get some major hate from by the fans, but after reviewing my list multiple times it just felt right to put Pittsburgh here. I’ve said this for the last couple now but like San Jose and St. Louis this crowd neither wows me or puts me to sleep while watching from the comfort of my couch. If the team is playing well, the crowd will be buzzing, if the team is playing poorly, it will sound like a library inside PPG Paints Arena. The atmosphere in Pittsburgh doesn’t excite me by any means.

“And the rocket’s RED glare.” The crowd in Washington will be loud from the national anthem until the final buzzer sounds. The crowd will be filled with red jerseys, which is always a cool visual to see on T.V.. We will also hear the “Lets go Caps” horn throughout the entire game, love it or hate it, you are going to hear it.

The atmosphere in Boston is always electric, year after year the Boston faithful cheers their hearts out when the B’s are in the playoffs. Unlike some of the atmosphere’s at the top of the list there is nothing that the Bruins atmosphere is known for. In previous seasons it was Rene Rancourt’s rendition of the National Anthem with some added fist-pumps, this would set the Boston atmosphere apart, but now that Rene is retired it will not be the same.

Playoff hockey is back in the state of Colorado and it is likely to be present for years to come. This may seem too high for people, no pun intended, but that’s only because we have not seen the Avs in the playoffs recently. If you watched any intense Avs game this regular season you know that the Pepsi Center absolutely rocks. I’m really looking forward to seeing this atmosphere in Colorado.

Nothing screams “America” more than the national anthem that’s performed by Sonya Bryson, a retired Air Force Sergeant, before Lightning games. She is always joined by another veteran as they salute while she sings, it is truly something special to watch. Ordinary sports fans may assume that because the Lightning play in Florida they don’t have any fans and that the building is empty and quiet every game. It’s the total opposite though, Tampa is an unbelievable atmosphere, it disclaims the notion that hockey shouldn’t be played in the south. The only complaint I have toward the atmosphere in Tampa are the noisemakers that are given out before playoff games. I went to game in 2016 and those things could make your head hurt for days.

Playoff hockey is back at Nassau Coliseum, after thinking the barn would close forever in 2015. This year, Islander fans and the atmosphere at the “old barn” has been examined closely under harsh criticism. WHEN, the stands are filled to capacity, which they will be for the playoffs, the Coliseum ranks among one of the loudest arenas of all sports. The low ceilings make it feel like the fans are sitting on the ice, the place literally feels like it’s shaking.

It’s hard to argue against putting the Leafs this high on the list, even though I’m sure some Leaf fans will still be upset with me for not putting them at #1. What can I say? When the fans aren’t throwing jerseys on the ice, they are arguably the most passionate fanbase in the league. “Go Leafs Go,” is likely to be stuck in your head after only watching one game this series. IT’S GOING TO BE LOUD.

“It’s all you fault, it’s all your fault.” The atmosphere inside Bridgestone Arena has quickly become one of the best in all of sports. Just like in Las Vegas, Nashville puts on a show every time their home team is in the building. It starts with the singing of the national anthem by a country music star, throwing catfish onto the ice, and having Tennessee Titans players funneling beer out of a catfish. This all happens before the first puck drop…During the game, the Nashville fans will surprise you with creative chants, that will likely make you laugh. The best of the chants coming after the Preds score a goal, look out for that!

Sea of red. What a season the Flames have had up to this point, Flame fans have every right to be as excited as they are about this team. This will translate into the atmosphere at the Saddledome throughout the playoffs. Every single person is going to be wearing red, making for an image that cannot be missed. It’s so cool when fans where the same color. I love it. It’s going to be fun watching Calgary fans party like it’s 2004.

I may be coming in a little too hot with this pick considering that Vegas only has two full regular seasons under their belt, but c’mon how could I not. Like Las Vegas should, they put on an absolute show for Knights games; Vegas just does everything so right. The atmosphere in this series could play a major factor of who moves on past the first round…

The Winnipeg Whiteout. It’s one of the best traditions across sports, every fan decks themselves out in all white, white jerseys, white hair, and white face paint. Watching the whiteout on T.V. is actually mesmerizing; the ice and the white in the stands contrast each other so beautifully. (Wow, what a sentence…I’m not an art guy) The “Go Jets Go” chants will reign down from the start of warmups until the last whistle. These fans are the true diehearts that make the sport of hockey so great.