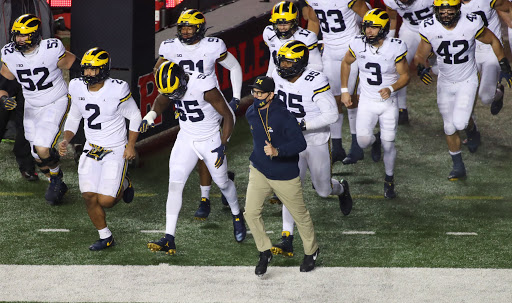 The Michigan Wolverines (2-3) are getting back in a good direction after beating Rutgers on Saturday. However, there’s still plenty of issues to work on some of which go back to late last year. They’ll have to get it together before their next matchup against the Penn State Nittany Lions, who have taken an eerily similar path to sub-mediocrity in 2020.

You’d be hard-pressed to find a team in the Big Ten-much less the country who’s fallen from grace harder than the Wolverines. Oddly enough, Penn State is that kind of team. After entering 2020 as the eighth-best team in the country with the best chance to knock off Ohio State from within the conference, the Nittany Lions have started their season 0-5-their first such start in school history and are the lone winless team in the Big Ten.

The offense is led by quarterback Sean Clifford who’s completed 57.2% of his passes for 1,070 yards and 11 touchdowns. However he also has eight interceptions and has been sacked 16 times, both are the highest parks in the Big Ten. He’s also picked up 182 yards and a touchdown on a team-high 64 carries so far with Devyn Ford and Caziah Holmes doing their part to round out the running back core in the absence of Journey Brown and Noah Cain.

Speaking of absences, Penn State will now have to adjust to life without tight end Pat Freiermuth, who is now out for the season with a leg injury. It’ll be up to Jahan Dotson and Parker Washington-who’ve combined for 52 catches for nine touchdowns-to take on a greater workload.

Can Cade McNamara Build Off His Last Game?

McNamara will get the start for the first time in his career, and he’ll be able to do so against a porous Penn State defense that ranks fourth in the Big Ten in yards allowed but is tied for second to last in average points allowed with the Wolverines. However, his efforts will only mean so much if another unit can answer a key question….

Can The Defense Make More Improvements?

The good news for Michigan’s defense is they managed to register sacks and turnovers for the first time since their season opener against Minnesota. Beyond that, there’s not much to be excited about. The maize and blue’s contest against Rutgers marked the fourth straight game and the sixth time in the last seven games they’ve allowed 440 yards of total offense. They’ve also now allowed seven different receivers to have games of at least 100 yards in each of those games.

In short, this defense is bad. The only way for it to improve even a little bit is if Kwity Paye can come back from injury soon. Even then, he can’t help out with covering receivers, which remains this defense’s biggest weakness. This Penn State offense may be shot to hell with injuries, but we now know it doesn’t take much to make these corners or Don Brown uncomfortable downfield. Even without Pat Freiermuth, the combination of Dotson and Washington should be yet another test for this unit. They’ll have to hope the pass rush can build off of last week’s contest.

Is “Speed In Space” Finally Starting To Work?

Ever since Josh Gattis took over as offensive coordinator, his goal was to find receivers with the speed to get open no matter who was covering them. It may have only been a year, but it seems that Gattis’s approach seems to be paying off. For evidence, look no further than Cornelius Johnson.The sophomore from Connecticut caught five passes for 105 yards and two touchdowns, one was on a deep throw downfield and another demonstrated some shifty maneuvers on his part.

Whether this means Johnson can be a number-one going forward remains to be seen. Michigan’s offense is more about distributing the ball to lots of different players on the ground and through the air. However, if more Wolverine receivers can have games like this, then speed and space will give these guys a much better chance of winning week in and week out.

The Nittany Lions and Wolverines face off Saturday, November 28 at 12 p.m. eastern on ABC.