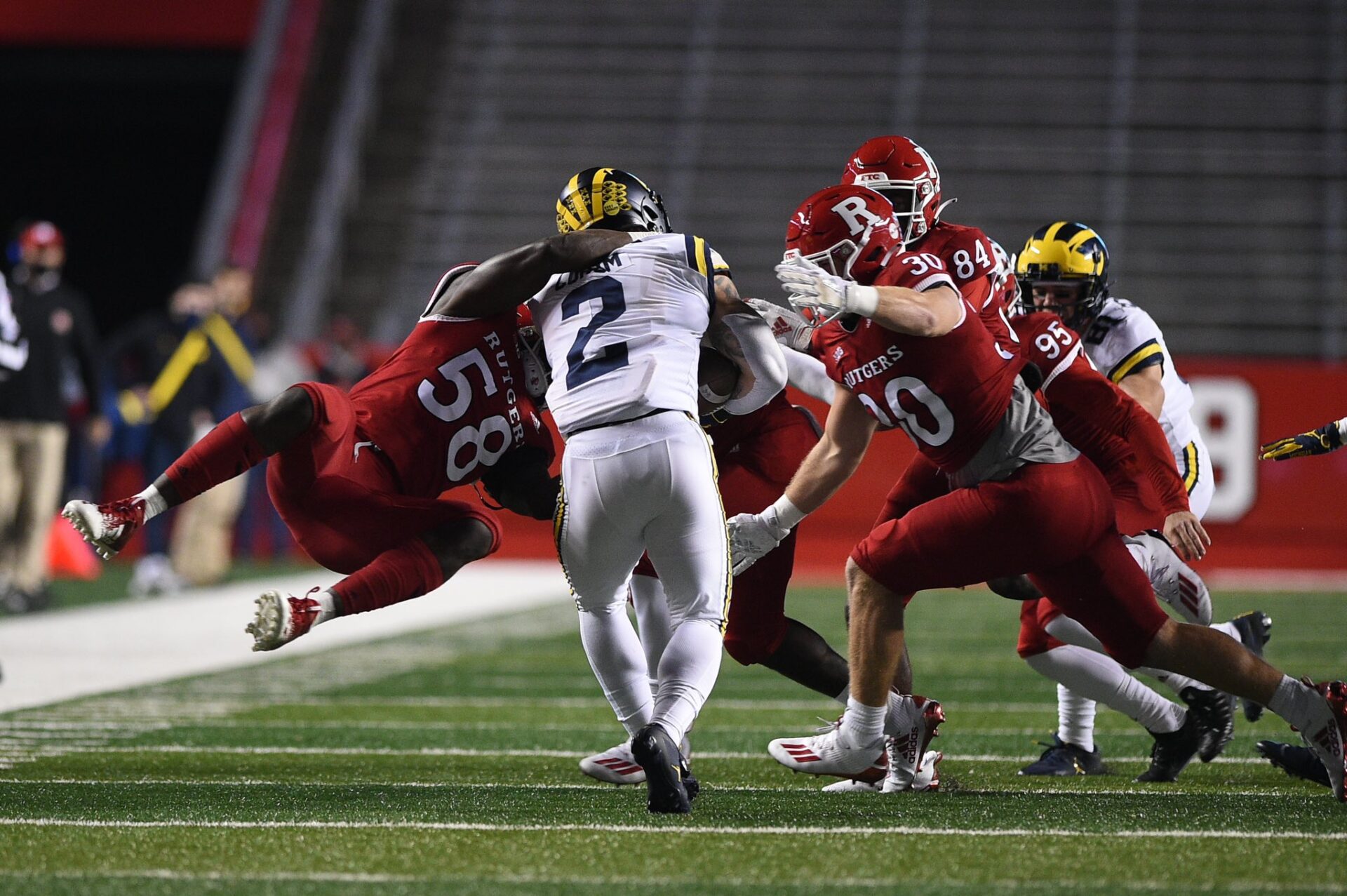 The Michigan Wolverines (2-3) got back into the win column beating the Rutgers Scarlet Knights (1-4) by a score of 48-42 on Saturday night in New Jersey.

Cade McNamara completed 27 of 36 passes for 260 yards and four touchdowns, including one on the ground. Hasaan Haskins had 23 carries for 112 yards and a touchdown. Cornelius Johnson caught five passes for 105 yards and two touchdowns. It was his first 100-yard game with the maize and blue.

After a slow start by both teams Rutgers broke the ice first with a wildcat run in the red zone by Johnny Langan with 5:06 left in the first quarter. Langan would run in another touchdown after a missed field goal by the Wolverines to double the score in the second quarter.

After a field goal that put the Scarlet Knights up 17-0, the maize and blue once again benched Joe Milton for Cade McNamara and once again, McNamara scored the team’s first touchdown on his first drive of the game, this time on a 46-yard pass to Cornelius Johnson. With just under two minutes left, Michigan had a chance to make it a one-possession game with a field goal, but Quinn Nordin missed his second attempt of the day and Rutgers went into halftime up 17-7. Their 10-point lead was their largest halftime lead over the wolverines in the history of the series between the two teams.

As the second half began, Michigan was in dire need of some kind of spark. They got that and more as Giles Jackson returned the opening kickoff of the half back for a touchdown. However, Rutgers would answer right back when Noah Vedral found Bo Melton for a 61-yard touchdown pass on the very next drive. The maize and blue answered right back with another touchdown pass from Cade McNamara.

Rutgers added another field goal and the teams traded stops for a bit, but Michigan broke through again as Cade McNamara found Mike Sainristil in the end zone to give the Wolverines their first lead since their season opener at Minnesota. After a three-and-out by the Scarlet Knights, Michigan marched 85 yards for another touchdown, making it 35-27 with just over five minutes left.

After the kickoff, the Scarlet Knights marched deep into Michigan territory in hopes to tie the game again. With under a minute left, they got the ball to the Michigan 12-yard-line. After three plays that failed to get a first down, Noah Vedral found Aron Cruickshank for a touchdown. On the next play, Vedral carried multiple Michigan defenders with him into the end zone to tie the game at 35 with 27 seconds left. Michigan would run the clock out to force overtime

The Wolverines got the ball to start the first overtime and were forced into a three and out. Quinn Nordin lined up for a field goal to give Michigan the lead, but he just missed the right upright. Rutgers then positioned themselves for a game-winning field goal, but Valentino Ambrosio pulled his kick left forcing a second overtime.

The pain from the miss was short lived as Vedral found Jovani Haskins on a screen pass for a touchdown on the first play of the second overtime period. A few minutes later, Cade McNamara added a rushing touchdown to his list of accolades for the night to tie the game at 42.

After eight plays, Hasaan Haskins added his first touchdown of the day in the third overtime, but Michigan’s subsequent two-point attempt fell short. On a fourth and nine fron the Michigan 24, Noah Vedral’s pass to the end zone was picked off by Daxton Hill, securing a much, much needed win for the maize and blue.

They’ll have a chance to win consecutive games for the first time all year next Saturday, when they return home to fact the Penn State Nittany Lions in Ann Arbor.