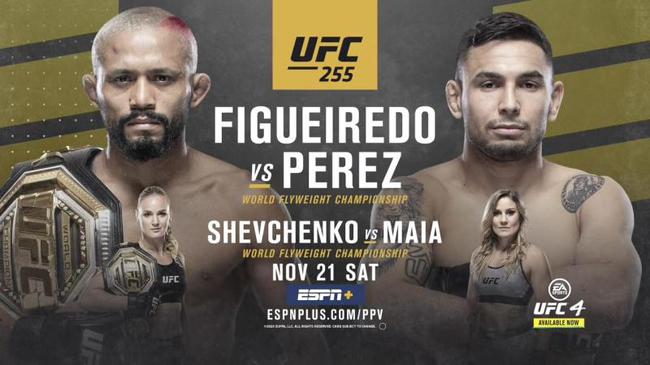 Figueiredo is coming off the best performance of his career as he choked out veteran #1 ranked Joseph Benavidez in round 1 after dropping him several times in the early goings.

He is the hardest hitting flyweight in the history of the sport and is also a slick submission artist. On the other side, Perez is also coming off a first-round finish against the tough Jussier Formiga. He was able to land multiple powerful leg kicks on Formiga to get a TKO win and then earn a title shot. The key for Perez will be to land combinations, which he does so well and he is also a very capable fighter on the ground with 7 submissions. The champion, however, does not need the kind of volume that Perez does because of the dynamite he possesses in his hands. This is an unbelievable matchup and main event that is going to be an all-out war because both these guys love coming forward.

The co-main event features one of the best mixed martial artists on the UFC roster and one of my favorite fighters in Valentina Shevchenko. She is high on confidence as she should be being undefeated in her last five fights. Four of those being title fights. She has dominated every single one of her opponents, especially in recent times. Jennifer Maia on the other hand earned her title shot by upsetting Joanne Calderwood in August with a first-round arm bar. She has a phenomenal jiu-jitsu game and also packs some power at 125lbs. Despite Shevchenko’s dominance, some believe that Maia could cause some problems on the ground for the champion, which is what makes this fight interesting.

Figueiredo by KO/TKO or SUB (-175)
The champion is going to do what he has been doing in recent times, and finish the fight with his hands raised. Perez is a tough customer, who is going to be game but he has never faced the power that Figueiredo possesses. I would say a KO/TKO for Figueiredo but he often drops his opponents and then chokes them out.

Shevchenko by KO/TKO or SUB (-160)
The -1500 champion Shevchenko is a killer in the octagon and will get the finish in the co-main event. She will be too fast, too strong, and too skilled for Maia. She will not engage with Maia too much on the ground and will get her out of there inside the distance.

Means to win (-106)
Although I picked Mike Perry to win on the podcast, I have changed my pick since he missed weight by a lot. Tim Means will now come out firing and with more reasons to get the win. He will use his experience and skill to beat Perry, who struggled to make weight.

Chookagian to win (+205)
Despite a tough loss in her last fight, Katlyn Chookagian has been active and has more experience fighting top-ranked fighters throughout her career compared to Cynthia Calvillo. Calvillo has good wrestling but Chookagian is the better all-round fighter with a much better reach. She will have a smart game plan to touch and move against Calvillo and get the win.

Rua to win (+154)
The legend and former champion Mauricio “Shogun” Rua runs it back with the “BearJew” Paul Craig. Craig’s best chance of beating Rua is to pull guard and get a submission but his striking is nowhere near Rua’s. If Rua stays composed and doesn’t jump into Craig’s guard, he will win the fight because he is more skilled in all other aspects of the game.

Catch the early prelims live at 6:30 pm EST and prelims at 8:00 pm EST on ESPN2. Main card start at 10:00 pm only on pay-per-view. Sneaky amazing card top to bottom with very recognizable names all over.