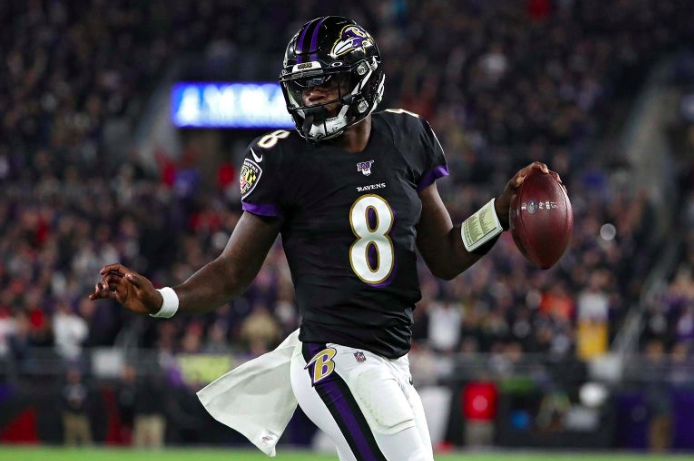 Lamar Jackson is the leading candidate for MVP, and here’s why. Lamar has started a new era in Baltimore — an era dominated by offense. Since joining the league, the Ravens have been a defensive-oriented and dominated team. This year, they are the exact opposite. Their team relies heavily upon the offense to win games, not the defense. So far this season, Lamar is tied for second (with Dak Prescott) among all quarterbacks in the league in QBR with a rating of 77.8. The only quarterback above him is and Russell Wilson (78.1). Jackson’s rating is higher than tried-and-true performers, Tom Brady (58.3), Aaron Rodgers (56.5), and Deshaun Watson (75.1). This proves that not only is Jackson electric, but he is effective and efficient. Now you may be thinking: Shouldn’t Dak Prescott, Patrick Mahomes, and Russell Wilson be top contenders for MVP? Maybe, but Lamar is the standout. The title of the award is MVP- most valuable player, not the best player. Lamar is the most valuable piece of not only the Ravens offense but of the Ravens team. When Lamar has the ball in his hands, teams freak out. He brings a component of uncertainty to the game. When he is lined up in the pistol, which is 44% of the time, teams don’t know if he is going to pass the ball, run the ball, or hand it off. This makes him the most dangerous player in football. Opposing coaches do not know how to stop him. When asked about the Ravens and Lamar Jackson after the game this Sunday, rookie head coach, Zac Taylor said

“The quarterback on their side (Lamar Jackson) is a heck of a player. He’s one of the most exciting players I’ve ever seen. (He’s) dynamic. I’m interested to see what teams do down the road here to stop him, because he certainly is hitting on all cylinders right now, and the way they complement each other on offense there running the ball — throwing play-action — they’ve done a great job. They’ve got some great pieces over there that make it really difficult on you.”

Lamar is vital to the Ravens defense as well. Having a dominant offense led by a powerful run game has allowed the Ravens defense to get rest and develop a good rhythm. In the team’s only two losses, to the Browns and Chiefs, Lamar has had less than ten carries. However, in their four biggest wins — Patriots, Steelers, Seahawks, Cardinals, and Texans — Lamar has had over ten carries. When Lamar carries the ball ten or more times, the Ravens have outscored opponents 180-100. What does this mean? It means the more Lamar touches the ball, the more successful the Ravens will be not only on offense but on defense as well.

Another thing to remember is Lamar Jackson has only played 17 games, just one more game than a season, in his NFL career. Just for reference, here is how he matches up against some of the NFL greats through their first 16 games. Lamar has 13 wins, 1258 rushing yards, a 94.4 passer rating, 7.6 yards per attempt, and a 63% career completion percentage. That is more wins than Patrick Mahomes (12), more rushing yards than Ladanian Tomlinson (1,236), a higher passer rating than Tom Brady (90.1), a higher yards per attempt than Aaron Rodgers (7.5), and a higher completion percentage than Drew Brees (61%) through their first 16 games of their careers.

“I was entertained…To sit back and watch, this was the first time I had a chance to watch Lamar in detail…I was like in awe like I’m looking at the game like man this is what it really looks like…Just watching the defense that couldn’t contain him…The league is going to be in trouble for a long time if they are going to have to deal with this guy…He is amazing and he is going to be hard to stop for a long time.”