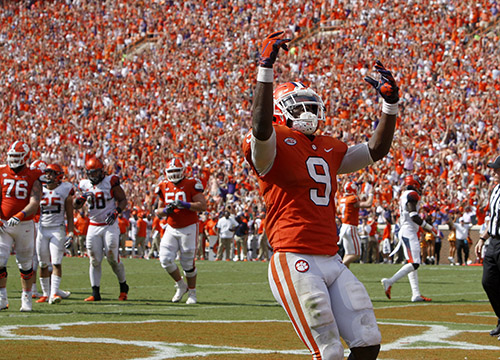 Don’t let Clemson’s dominance fool you at first glance. Sure, the Tigers have dominated this division for the past few years, but there have been plenty of interesting storylines over the years from Tallahassee to Newton. Let’s see what there is this season.

Death, Taxes and Clemson winning the ACC. Such has been the narrative for the past four years and will continue to ring true in 2019. Not only do they return arguably the best quarterback in the country in Trevor Lawrence, but they also return Travis Etienne, whose 24 rushing touchdowns were the most by any player in the country a year ago with his 1,658 yards ranking fifth. The Tigers also return Justyn Ross, Tee Higgins and Amari Rogers to their receiving core. The defense will need to adjust to life after Clelin Ferrell and Dexter Lawrence, but Xavier Thomas, Kendall Joseph and Isaiah Simmons are just a few names more than capable of filling those holes.

The Seminoles just haven’t been the same since Jimbo Fisher left, but brick by brick, they’re working their way back to the national stage. With Deondre Francois having transferred to Hampton, the starting quarterback job will now come down to James Blackman and Wisconsin transfer Alex Hornibrook. Cam Akers returns as the team’s leading rusher and hopes to show his team the elite running back the Seminoles signed for. Tamorrion Terry leads the wide receiving core while Asante Samuel Jr., Hamsah Nasirildeen and Marvin Wilson lead a defense hungry to establish itself as one of the best in the country.

Replacing Eric Dungey will be a tall order, but Tommy DeVito has what it takes to keep the Orange in the top 25 for most of the season. The team also returns leading rusher Moe Neal along with three of their top four receivers from a year ago, including Sean Riley and Taj Harris. On defense, Syracuse returns both Alton Robinson and Kendall Coleman, each of whom had 10 sacks a year ago. Andre Cisco and Christopher Frederick lead the secondary.

Much like Syracuse, the Wolfpack have a job to do in replacing Ryan Finley. They’ll have to decide between Bailey Hockman, Devin Leary and Matt McKay, the latter of whom appears to be the favorite. Meanwhile Ricky Person Jr. will look to be the next feature back for NC State with Emeka Emezie hoping to become a frequent target down the field. James Smith-Williams looks to be the next great N.C. State pass rusher while Chris Ingram and Nick McCloud patrol the secondary.

Jamie Newman will take over as the Deacons’ full-time starting quarterback after starting the last few games a year ago. Cade Carney hopes to improve on a season which saw him run for 1,005 yards and eight touchdowns. The receiving core will be without Greg Dortch, but they do return Scotty Washington, Sage Surratt and Jack Freudenthal. Carlos Basham Jr. hopes to be one of the best pass rushers in the conference while Essang Basey hopes to lock down the secondary.

The Cardinals will need to step it up on offense or risk getting swept in their own conference. First they’ll have to decide whether Malik Cunningham and Jawon Pass who, as his surname implies, is the better thrower. They’ll also have to find a running back who can tally more than 500 yards and a receiver who can crack 550. The defense will need to develop more of a pass rush as only two players tallied more than one sack.

The Eagles have some intriguing talent on offense. Quarterback Anthony Brown hopes to capitalize on a season that saw him throw for 2,121 yards and 20 touchdowns. Behind him, A.J. Dillon hopes to rack up 1,000+ yards and 10 touchdowns for the third straight season. The receivers will have to step up as just one of them surpassed 400 yards and no one had double-digit touchdowns. On defense, there are some big holes to fill, with the teams leaders in sacks, total tackles and passes deflected all left for the NFL.