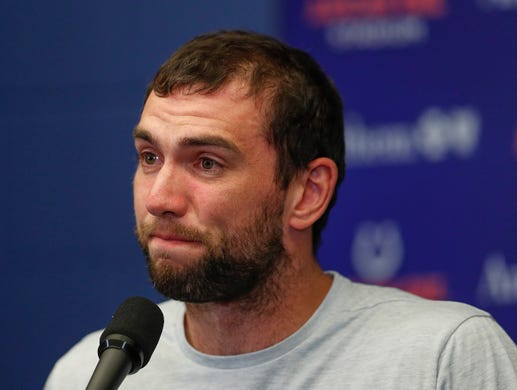 I’m not breaking much news here but if you haven’t heard yet, the starting QB for the Indianapolis Colts, Andrew Luck, surprisingly retired from the NFL after just 7 seasons. Now that some of the smoke has blown away from the topic it’s time to look at the franchise quarterbacks’ decision in a rational manor.

When the “tweet seen around the world” from Adam Schefter broke, I was shocked. I mean who wasn’t? I’m not a Colts fan, but being a general fan of the NFL (and a fantasy player), I cheer for “greatness.” After 7 seasons, Andrew Luck wasn’t quite at that level of greatness, like the trio of Brady, Brees and Rodgers, but at the prime age of 29, the potential for that greatness was very much still in play. Over Luck’s 7 year career, he dealt with a plethora of injuries, including a torn labrum in his throwing shoulder which kept the former No. 1 overall pick sidelined for the entirety of the 2017 season. His potential, and his ability to reach it, was hindered due to a long list of injuries; injuries that ultimately led to a career cut far too short…

Human. That is what professional athletes are – human. Andrew Luck is no different than any one of us besides the fact he is exceptionally talented at throwing a football. In Luck’s explanation for why he was stepping away from football, in short he said, “I want to enjoy life, take care of (his) family, travel the world, and take care of (his) body.” I get it, losing the former No. 1 overall pick and franchise quarterback just two weeks before the regular season is extreme and SUCKS if you are a Colt fan. But guys, when you look at the reasons behind why he made this decision, it is nothing out of the ordinary of what the common person wants in their lives.

At the end of the day, professional athletes are not superheroes and are not untouchable. Across sports, athletes have feelings just like the rest of us. Yes, they are held to higher standards and are looked up to as role-models, but once again they are HUMAN and we must not forget that.

What makes this retirement unique is the timing. Quarterbacks on a Super Bowl contender don’t walk away at just the age of 29 two weeks before the season begins. Jacoby Brissett can have all of the locker room behind him, but he is no Andrew Luck and that’s what stings to Colts fans.

Andrew Luck is now destined to become one sports greatest “What Ifs?”, along with other earlier retirees like Barry Sanders, Calvin Johnson and Chris Borland. For Luck, that might end up being a hard thing to live with. So, let’s all be sane human-beings and sport fans and give this guy a break. Remember him for what he did, rather than “The coward that retired at 29.”

This article is going to trigger some fans so let me know what you think by tweeting @Fenty_nosebleed on twitter.