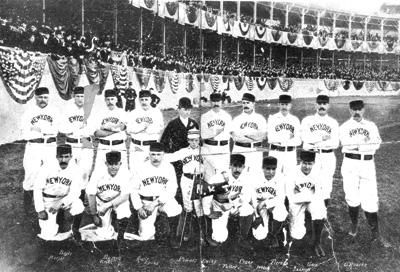 America’s national pastime, baseball, has roots in the pastime of Troy, a small city outside of Albany, New York. While most New Yorkers and baseball fans around the world tend to remember or at least acknowledge the history and presence of two former Major League Baseball teams in New York, the New York Giants and Brooklyn Dodgers, people tend to not know that Major League Baseball was once present in Troy.

The first records of organized professional baseball in Troy was after the American Civil War.[1] The Troy Haymakers joined the first professional baseball league, the National Association, in 1871.[2] The Haymakers played locally; the biggest rival of the team was the Brooklyn based, New York Mutuals. After fighting for a bid to join the National League of Major League Baseball in 1876, the Haymakers were denied. Finally, in 1878 the National League accepted the Troy based team to join the league, the team then changed its name from the Troy Haymakers to the Troy Trojans….and just like that, Troy was home to Major League Baseball.[3]

Throughout the Trojans’ existence in Major League Baseball attendance was a major problem. It seemed that the hardworking citizens of Troy did not want to go nor did they have the time to invest in watching their home town club. Over the franchise’s four years, the Trojans had three different home ballparks.[9] In 1879, the Trojan’s played at Putnam Grounds, which now exists as a local park in downtown Troy.[10] In their next two seasons, the Trojans played their games at the Haymakers’ Grounds and then played the last season across the Hudson River at the Troy Ball Clubs Ground.[11] While it was not at one of their home ballparks, the Trojans played the Worcester Worcesters, also known as the Ruby Legs, in the lowest recorded attendance in Major League Baseball history.[12] That game, on September 28th, 1882 had a total of six fans watching[13]…A record that will never be beaten.

“The Executive Committee of the National League of professional base-ball players met today, and accepted the resignations from membership in the league of Worcester and Troy clubs. Applications for admission to membership from the Metropolitan and the Philadelphia Clubs were recovered, and will be acted upon in December.”[15]

It seemed the record low attendance of six people at the Worcester and Troy game did not go over well for Major League Baseball in the end.

Unfortunately, much of the Troy Trojans history has disappeared, but one impact the franchise had is now seen across the country in San Francisco. The city of Troy is credited for becoming the birth place of the San Francisco Giants. The New York Gothams took the vacant spot in the National League in 1883, three years later the Gothams then would be renamed the Giants. The New York Giants then became the San Francisco Giants in 1958 and the rest is history. Today, in Troy, the only real remembrance of the team is a granite plaque in the middle of Knickerbacker Park honoring the legacy of the franchise.