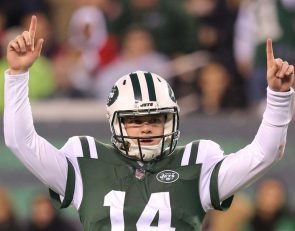 With the third pick in the 2019 NFL Draft, the New York Jets have an opportunity to continue building in the right direction.  The Jets are a team with needs all over their depth chart, so there are many options and potential scenarios that Mike Maccagnan and the rest of the front office have to gameplan for.  For the Jets, there are two options, stay with third pick and draft the best player available, or trade back to accumulate more picks.

Staying put with the third pick

Mike Maccagnan has been known for picking the best player available to him.  We have seen this with Leonard Williams and Jamal Adams falling right into the Jets laps.  If Macc falls in love with one or two of these guys at the top of the draft and doesn’t love the trade opportunities, he could be more than happy to stay with the third pick.  At this point in the draft process, it seems most likely the Jets would be taking either Quinnen Williams, defensive tackle out of Alabama, or edge rusher Josh Allen out of Kentucky.  Those two guys have emerged as top three players, right behind standout edge rusher Joey Bosa from Ohio State. Allen fulfills more of a need for the Jets as a edge rusher, but him and Quinnen are both premiere prospects and either of them could be the top player on the Jets board when they are picking at three.  I don’t think any Jets fan would be upset if the Jets came away with either Williams or Allen on draft night.

Just like every NFL draft, there will be teams desperate for a quarterback who will be willing to trade up to secure their guy. Potential teams looking to trade into the top three for a quarterback could be the Giants, Jaguars, and the Broncos.  All three of those teams have picks in the top ten so the Jets wouldn’t be moving far. With only five picks in this draft, and no second rounders, this could be a very compelling option for the Jets. Edge rusher may be the Jets biggest need, and the edge rusher class is incredibly deep with players like Brian Burns, Jachai Polite, Montez Sweat and Clelin Ferrell.  Realistically the Jets could get one of those guys at the tenth pick and also acquire a few second round picks, similar to the trade the Jets made last year for Darnold. Other possible guys the Jets could look at if they trade back are Jonah Williams, offensive tackle or possible guard from Alabama, or Greedy Williams, corner from LSU.

This is an amazing opportunity for the Jets.  They could opt to take an elite talent at the third pick, or possibly make a trade back to still get a really good prospect and also get picks to get acquire as much talent as possible.  For now, I would rather see the Jets make the trade back as long as they stay in the top ten. This team has needs all over the field, and with only five picks right now, they don’t have enough ammunition to fill their needs with good players.  Although Maccagnan and the front office have been backed up by ownership, they could all be drafting for their jobs this year. It is early in the draft process and a lot can change from now until late April, and it will be very exciting to see how the Jets can improve.