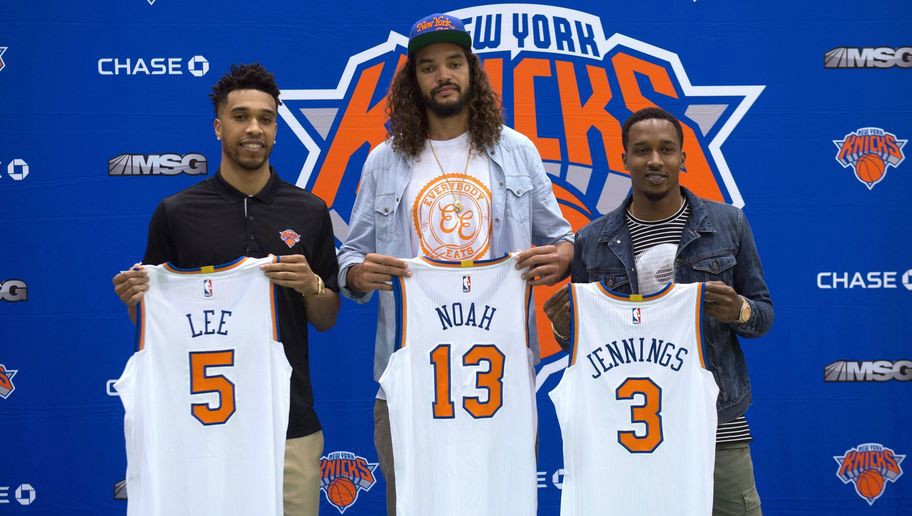 It’s no secret that the Knicks have exceeded all expectations for this season by making the playoffs and finishing with a record 10 games over .500. It’s been eight long years since Carmelo Anthony was lacing them up in The Garden carrying this franchise to the playoffs, and since that time, there have been a plethora of players that have walked through the doors who had me convinced they were a part of the solution. They weren’t. In this list, we’ll see some of the most promising and forgettable Knicks that have joined the team during the playoff drought. It may be painful to relive some of these memories, but I promise you, it feels a lot better knowing we are in the playoffs now, and hopefully the Knicks are moving away from their era of horrors.

This big-man played 71 games from 2013-2015 and wasn’t very impressive. At this point, the Knicks were looking for someone to pair up with Carmelo, and this was not the answer.

Timmy had two different tenures with the team. When he was first drafted, he looked like a solid rookie with a knack for scoring, but when the Knicks gave him that large free-agent contract, it was clearly an overpay, so he was used as a piece in the Porzingis trade. Hardaway was an exciting player during his time in New York, so there shouldn’t be too many haters.

In early 2015, I was convinced these three were the answer the Knicks were looking for. After all, being added to the roster from uncommon places, the trio put together a 5-2 run that felt magical at the time. In this stretch, Amundson was out 6’9″ starting center, Galloway looked like the guard of the future, and Lance Thomas felt like our version of Draymond Green. This feeling was however short-lived, due to the ensuing 8-game losing streak that immediately followed their exciting start.

These two were brought to the team when the Knicks traded Tyson Chandler to the Mavericks, and again, I was sure we had won that trade. Calderon looked to be a perfect PG to pair with Carmelo, and Dalembert also seemed like he was going to be solid. Neither of them was too bad, but they definitely were not any better than Tyson Chandler.

I refuse to give Porzingis his own spot here because it still makes me angry how he forced himself out, but this period of Knicks basketball was fun. It felt like they had a young team with a lot of guys who loved to share the ball and were all extremely skilled. Hernangomez was one of the most solid players around the basket and looked like he was a future 10-10 guy for sure. Kuzminskas holds a special place in the heart of many Knicks fans. The Lithuanian forward always shined in his minutes but never seemed to get himself into the actual rotation. Vujacic was a highly regarded teammate of Kobe Bryant, so all Knicks fans thought he would transfer his championship energy to New York. He didn’t.

The revolving door at PG since Raymond Felton left has been pretty remarkable for all of the wrong reasons. The Knicks have a knack for getting good college PGs but forgetting to develop them. It’s always exciting to watch an undersized guard with a chip on his shoulder get hot and spark a rally, and I can think of numerous moments from Larkin, Burke, Mudiay, Trier, and Jennings, but the one that hurts the most is, of course, Dennis Smith Jr.. He was supposed to be the big piece in the Porzingis deal, but because of injuries and the incompetence of the Knicks player development department, he turned into a ‘nothing’ player for the team. Luckily, they were able to flip him for Derrick Rose, so Knicks fans should forever thank him for that.

These guys were all good in their roles on the team. The entire group could be categorized as “good role players for playoff teams.” Afflalo and Lee were both good options in their time, and both of them were well-liked, although Lee had a very infamous moment in Charlotte when he didn’t take a game-winning shot because of a coach standing behind him. Lopez, Kanter, and O’Quinn were all good Centers for the Knicks. All of them felt like glue guys and entertainers as well. Portis and Vonleh were also both very good as Knicks. Portis turned himself into a true threat of a scorer at times in his one season on the Knicks, and Vonleh’s best season was as a Knick, where he averaged 8 PPG and 8 RPG. Marcus Morris was very good for the Knicks. It looked like he was going to the leading scorer for the team until he got traded to the Clippers halfway through the year. Mook always played with a chip on his shoulder and wasn’t afraid to mix it up with any opponent, even in the preseason. Michael Beasley was something special. “Your favorite player’s favorite player” had a couple of electric moments as a Knick, both on and off the court, and he was definitely a fan favorite in his short time with the team.

Let’s start with Joakim Noah who was barely able to muster up 50 games in his two seasons on the Knicks. The big man was paid $72 million to help stabilize the defense and turn the Knicks around, and instead, he decided to make the entire city look foolish as he looked like a shell of his former self in the Knicks uniform. He was awful, but the signing was worse. DeAndre Jordan wasn’t terrible, but it was clear he didn’t want to be here. Coming over from Dallas for Porzingis, Jordan made it evident that he didn’t care about his time in the mecca. He then immediately signed with his best buddies across town to form a super team. Alexey Shved might have been the worst basketball player to ever make the NBA. The only memorable thing about him was the awful shot he somehow managed to perform twice. Derrick Williams was a former top pick who didn’t end up panning out in the NBA, but before he made the career shift overseas, he managed to ruin expectations for Knicks fans. The man played nearly every game in his one season on the team and didn’t do anything productive whatsoever. Cole Aldrich was another terrible player. The only thing I can distinctly remember about him is that he was missing a few front teeth.