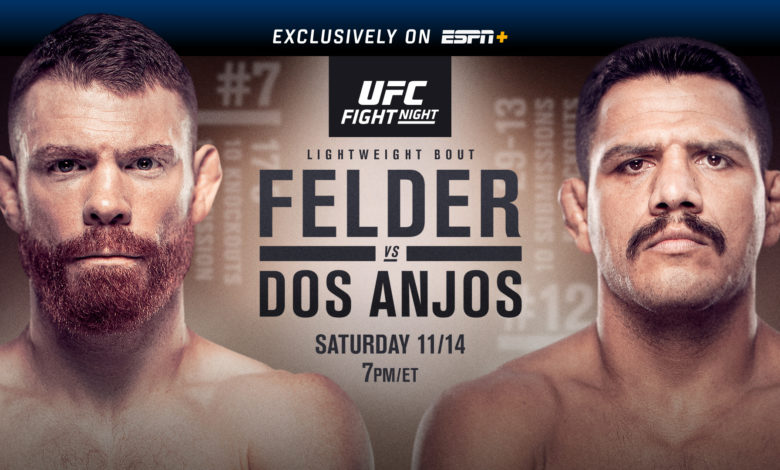 The former lightweight champion, Rafael dos Anjos makes his return to the lightweight division after 8 fights at welterweight to take on the #7 ranked “The Irish Dragon” Paul Felder. Felder accepted this fight on 5 days notice after #12 ranked, Islam Makhachev pulled out due to injuries. Great move by the Irish Dragon who is an absolute company man, that color commentates fights, corners people last minute and is a perennial top 10 at lightweight. Dos Anjos is coming off decision losses at welterweight to #8 Michael Chiesa and #3 Leon Edwards but believes that he can achieve UFC gold once again at 155lbs. Felder is coming off a razor-thin split decision loss to #5 Dan Hooker in February, which many thought he won. Felder is an animal for accepting a short-notice fight against a former champion in dos Anjos.

Dos Anjos is a very well rounded fighter and an experienced fighter with 42 professional under his name. He will look to strike with Felder but will turn to takedowns, where he has the advantage over the Irish Dragon. Felder is very skilled on the feet and will win most of the striking exchanges. His takedown defense is also world-class, and if he can stuff a few takedowns early, he can turn the tide his way. This is going to be an uphill battle for Felder who cut a good amount of weight to make 155lbs on 5 days notice. Dos Anjos also suffered from COVID-19 last week and a change of opponent means that he will also have to adapt after preparing for Makhachev during his camp. What a main event we have on our hands with two extremely high-level fighters. Felder is known to brawl and dos Anjos will not back down either. Cannot wait for this dogfight.

Felder to win (+162)
Despite the short notice fight for Felder, I love the underdog. He is coming in with a chip on his shoulder and will make the most of this opportunity. Dos Anjos has the grappling advantage but I see this fight staying on the feet for the most part and Felder getting it done.

Razak Alhassan by KO/TKO (-155)
The heavy hitters Abdul Razak Alhassan and Khas Williams look to land bombs on each other all fight. This fight is not going to go on too long and while they both have unbelievable knockout power and aggression, Razak Alhassan has the better skillset, and will get the KO/TKO win.

Brendan Allen to win (-110)
This catchweight fight between Brendan Allen and Sean  Strickland is a tough one to call because they are both top-level middleweights. Allen is good on the feet and excellent on the ground. Strickland on the other hand, has some of the cleanest striking in the division and it was on full display 3 weeks ago when he won a one-sided decision. Having fought recently and going the 3 round distance could negatively affect Strickland, which is why I like the younger, hungrier Allen to win this fight.

Hansen to win (-225)
The 21 year old Kay Hansen passed her first UFC test with flying colors as she locked in an armbar to finish her UFC debut in style. This is going to be Cory McKenna’s UFC debut and although she has just 1 loss, she has never faced anyone like Hansen. Hansen is a better fighter overall and will get the win.