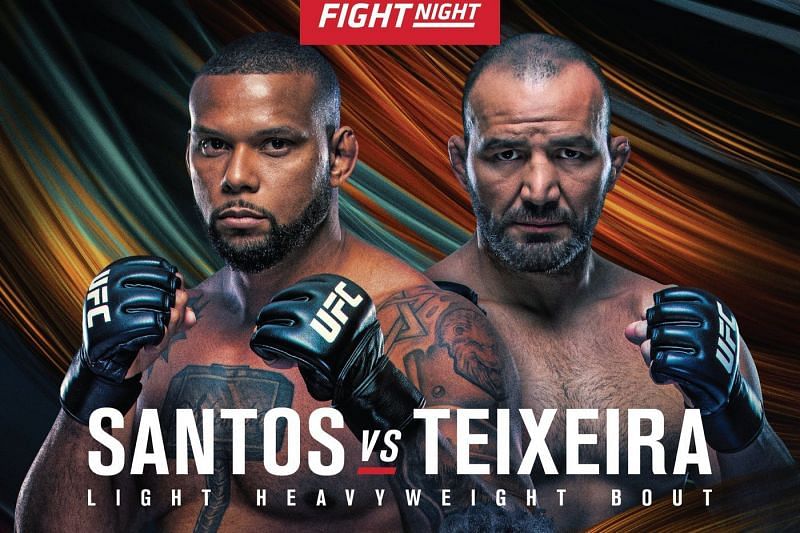 The powerful, #1 ranked lightweight Thiago “Marreta” Santos takes on the well-rounded veteran, #3 ranked Glover Teixeira in tonight’s main event. Santos is making his return to the octagon after having several leg surgeries after his split decision loss to then-champion Jon Jones in July 2019. Santos had won his previous 4 fights that included 3 KO/TKOs before fighting Jones for the belt, and contested very well against the champion despite hurting his leg early in the fight. Teixeira on the other hand is on a 4 fight win streak with 3 finishes and has definitely earned his shot at the #1 contender. Both fighters have fought for the lightweight belt once and lost, and now they have a good opportunity of getting another shot at UFC gold if they win tonight. Although middleweight champion Israel Adesanya is being booked to fight current lightweight champion Jan Blachowicz, the winner of tonight’s main event will have a strong argument to fight for the strap next.

The game plan for Santos will be to keep the fight on the feet and land power punches and kicks, like he usually does. He does not want to be on the ground against an experienced Teixeira who has a clear advantage on the there and will look for any opportunities to grab an arm, leg or neck. Teixeira likes to stand and bag as well sometimes but this would hurt him against a dangerous striker like Santos. Tonight we see two skilled and tough Brazilians go against each other. Will the hard-hitting Santos have a successful return, or can the 41-year-old legend Teixeira earn another shot at the lightweight belt?

Santos by KO/TKO
Teixeira’s biggest threat against Santos will be his ground game.  Santos showed against Jones that he has good takedowns defense, and that was despite being injured. He is strong enough to stop Teixeira from taking him down. The fight will stay standing and Santos will connect one of his bombs on Teixeira and get the KO win.

Boser by KO/TKO
The rising star from Canada Tanner Boser has found a way to control his chaos in the octagon has managed to get to KO wins in 2020. The former heavyweight champ Andrei Arlovski got a decision win in his last fight but has absorbed a lot of damage of late. Boser will have the speed advantage and will be able to put the former champ’s lights out.

Raoni Barcelos to win (-350)
The versatile Raoni Barcelos is on an 8 fight win streak and is 4-0 in the UFC. He has won via KO/TKO, submission and decision since joining the UFC. Khalid Taha on the other hand tends to come out firing but is not on the same level as Barcelos. The ML odds are at -350 but Barcelos will be a great addition to any sort of parlay.

Brendan Allen to win (-116)
As the odds suggest, this is a very close fight between two middleweights. Ian Heinisch is a tough guy, who loves to scrap. He is a skilled kickboxer and is not afraid to put himself in the fire. Allen on the other hand is good on the feet, but world class on the ground. Allen has the slight overall edge which is why I like him to get it done tonight.

Xiaonan to win (-158)
Although former title contender Claudia Gadelha is on a 2 fight win streak, her last split decision win could have been a loss, and should have according to me. Yan Xiaonan on the other hand has not lost a fight since 2010 is 5-0 in the UFC. She has phenomenal striking and can stop Gadelha’s takedowns. Xiaonan will get the win tonight.