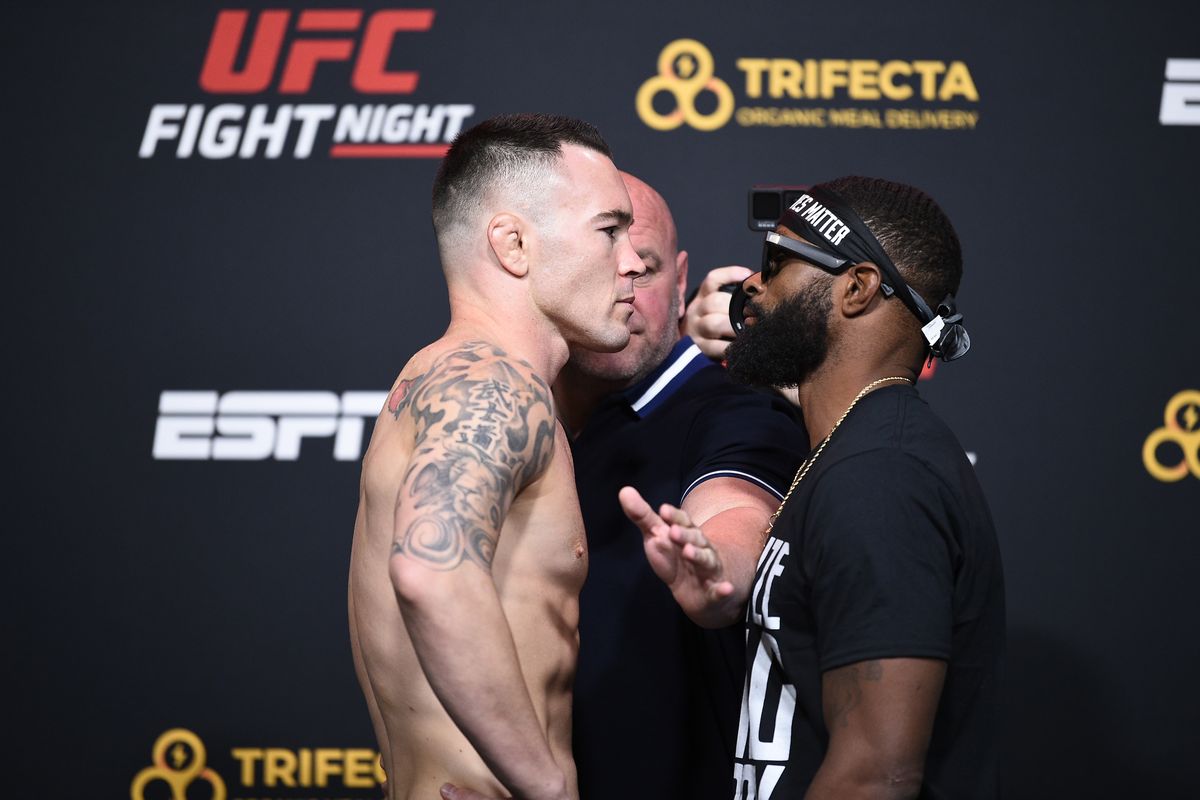 The much-awaited welterweight grudge match between former interim champion, Colby “Chaos” Covington and former champion, Tyron “The Chosen One” Woodley finally comes to fruition in tonight’s main event. Covington’s last fight was a TKO loss to champion, Kamaru Usman in December 2019, while Woodley is coming off of a loss to #1 contender Gilbert Burns in May after losing his title to Usman in March 2019. With both these fighters looking to bounce back from losses, and with all the bad blood between the two welterweights, tonight’s main event promises to be a war. A win for both these fighters should give them a title shot, which they would have rightfully earned.

The game plan for Covington would be to keep his relentless pressure on Woodley from start to finish, with quick strikes and non-stop grappling. Woodley will try to block and avoid the strikes on the feet, and look to land that big and fast overhand right, his most dangerous weapon. Both these fighters are phenomenal wrestlers and it will be very interesting to see who comes out on top in the grappling exchanges. Covington’s takedowns are frequent and usually on point, but Woodley has a takedown defense rate of 91% despite the poor showing in his last two fights. Woodley has mentioned that he has to let his hands go and throw more strikes, a strategy which saw him being at the top of welterweight for a long time. This fight is going to be so interesting and exciting. Can Covington maintain that world-class pressure and back up all that trash talk, or will championship Woodley show up and prove that he still has another title run in him?

Covington by decision (-155)
Covington’s pressure will prove to be too much for the older Woodley in the fight. Woodley’s only chance is to land the right-hand bomb early but if Covington avoids that, which I believe he will, he will grind out the decision. Although Woodley was dominated in his last two fights, he was not put away and his chin will hold up again.

Both, Donald “Cowboy” Cerrone and Nico Price are arguably the two most entertaining fighters on the roster. This fight will make it past the halfway point because both of them have had enough rest from their last fights. This is likely to be the fight of the night tonight.

The UFC’s fastest rising star, Khamzat Chimaev will look to make it 9 finishes out of 9 when he takes on the experienced Gerald Meerschaert. The jiu-jitsu blue belt Chimaev mentioned in the press conference that he would submit the black belt Meerschaert. Despite Meerschaert’s experience and skill, I believe that Khamzat will do as he said and get the submission.

Walker by KO/TKO (+150)
If the fight stays standing, Johnny Walker will throw strikes from awkward angles and has every chance to finish Ryan Spann. Walker also possesses unbelievable power. Spann’s best bet is to wrestle Walker, but Spann did not use wrestling in his last fight.

Dern by submission (+160)
The jiu-jitsu wizard Mackenzie Dern has 5 submission victories in her 8 wins. If the fight goes to the ground, she will get the finish. Randa Markos is a solid, experienced fighter but already has been submitted a couple of times.

Holland to win (-260)
Kevin Holland will extend his win streak against Darren Stewart. Holland is a very well rounded fighter with good kickboxing and a strong ground game. Stewart is a solid fighter but has not faced the level of competition that Holland has in his career. Holland will get it done tonight.

Watch the prelims at 5:00 pm EST and the main card at 8:00 pm EST on ESPN+. Best non PPV card of the year tonight. Cannot wait!