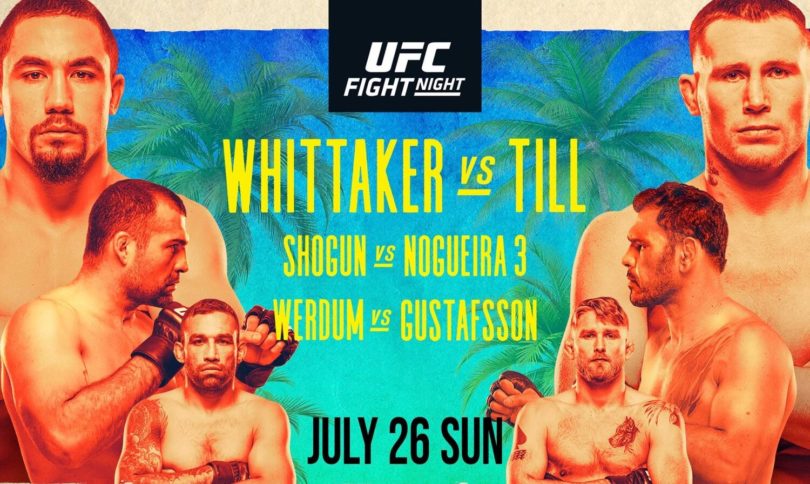 Former middleweight champion and the first Australian-born UFC champion Robert “The Reaper” Whittaker takes on top contender, England’s Darren “The Gorilla” Till on Fight Island, Abu Dhabi. Although this is The Reaper’s first trip back to the octagon since losing his middleweight belt to Israel Adesanya in October 2019 at UFC 243 in devastating fashion, Whittaker claims “that spark came back, that fire, that hunger.” His motivation to fight and win is back. A motivated Whittaker can be a nightmare for anyone in the division, look for him to come out strong with bursts of offense that have caused problems for all of Whittaker’s past opponents. Till on the other hand is coming off a victory over the “bulldozer” of the division, perennial contender Kelvin Gastelum at UFC 244 in November 2019. That was Till’s first fight at middleweight and he looked really sharp and comfortable fighting up a weight class. His confidence is at a high coming off that impressive victory. Till will use his reach to control distance throughout the fight and look to land his dangerous left hand. Expect an extremely competitive stand up bout and absolute fireworks from these two phenomenal strikers.
Till vs. Whittaker over 4.5 rounds (-110)

The co-main event features a trilogy fight between former UFC light heavyweight champion Maricio “Shogun” Rua and legendary Brazilian fighter Rogerio “Minotouro” Nogueira. Although Rua got the better of Nogueira in the previous two meetings in 2005 and 2015, the fights were extremely close. Both fights were very back and forth with the first one being absolutely wild where both fighters scored knockdowns. If the trilogy is anything like the previous two fights, it will be a fantastic watch for fans.
Rua by KO/TKO (+115)

Former heavyweight champion and Brazilian Jiu-Jitsu wizard Fabricio “Vai Cavalo” Werdum takes on the always dangerous Swede, Alexander “The Mauler” Gustafsson who is making his heavyweight debut. Werdum will look to take Gustaffson to the ground and try to get a submission while Gustafsson will keep his distance and let his hands flow. This is a classic BJJ vs. striker matchup and with both fighters coming off of back-to-back losses, watch out for them to come well-prepared and ready to execute.
Gustafsson by KO/TKO (+120)

Watch the prelims at 5:00 pm EST and the main card at 8:00 pm EST onwards on ESPN or ESPN+. Trust me when I tell you that we are lucky to have these fights for free, especially the main event.