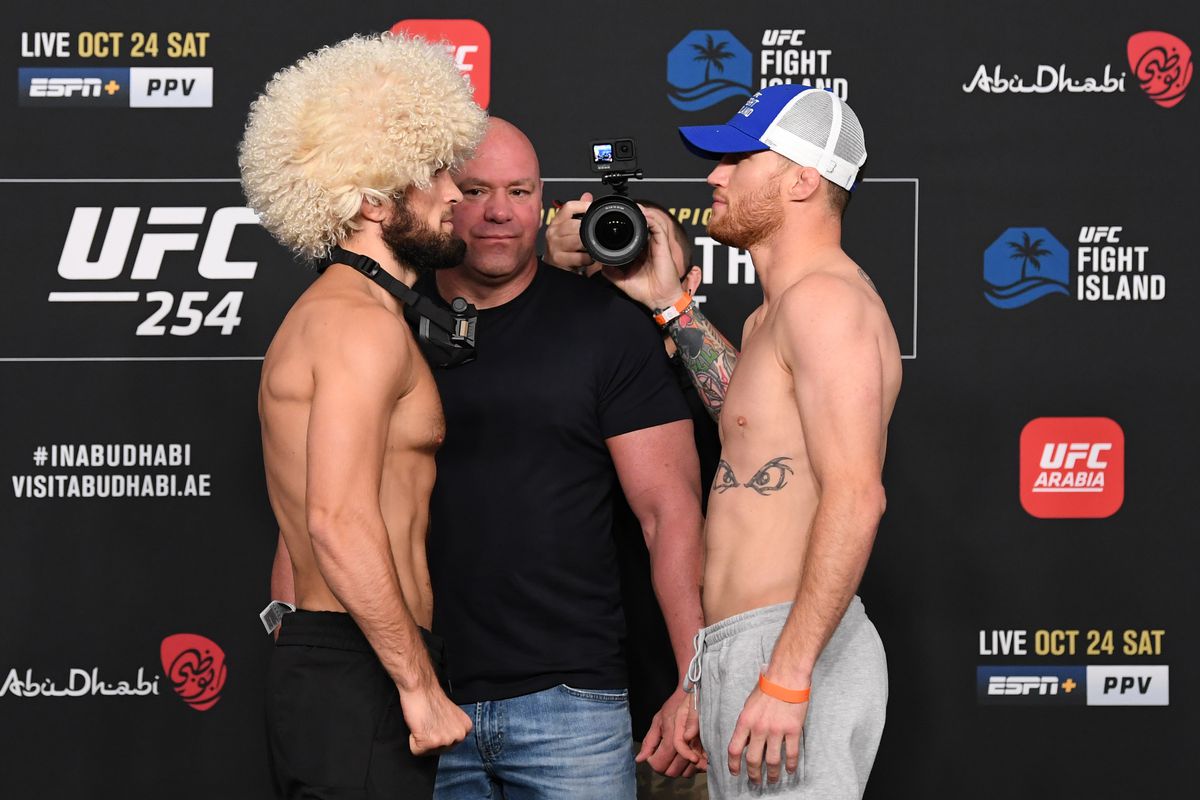 The most anticipated pay-per-view is finally here as the undefeated, undisputed lightweight champion Khabib “The Eagle” Nurmagomedov takes on the fearless interim champion, Justin “The Highlight” Gaethje. Nurmagomedov is 28-0 in his MMA career, having dominated every single opponent. “The Eagle” has lost just one round during this 28 fight win streak, which is an unheard level of domination. He is undefeated in 12 in the UFC with wins over former double champion Conor McGregor, former lightweight champion Rafael Dos Anjos, and former interim champion Dustin Poirier, among other top contenders.

On the other side of the octagon, Gaethje is on a four-fight win streak coming off the best performance of his career against a killer in Tony Ferguson, who was on a 12 fight undefeated streak himself. Gaethje finished Ferguson in round 5 to win the interim belt in May. Gaethje has been put through the ringer since signing with the UFC in 2017, consistently fighting top lightweights. He has a 5-2 record in the UFC and has won 9 bonuses in his 7 fights. This man is extremely entertaining and is not afraid to put himself in the fire to get the job done.

Everyone knows Nurmagomedov’s strategy, which is to take his opponents down and control them from the top to look for ground strikes and submissions. Knowing this is one thing and stopping it is a whole other. 28 have tried, and 28 have failed… Being a division 1 NCAA wrestler does not hurt Gaethje’s chances against Khabib. Gaethje has the clear advantage on the feet, and has some serious knockout power. If Gaethje can stuff some takedowns and somehow keep the fight standing, this can get very interesting. Gaethje has a tough mountain to climb to get the “real” belt but Nurmagomedov also faces his toughest test to date. This champion vs. champion main event is going to be bonkers and I cannot wait for Saturday.

Nurmagomedov by finish (-120)
The undefeated champion will impose his will as he always does and even though Gaethje is an accomplished wrestler, he will not be able to stop Nurmagomedov from taking him down and controlling him. Nurmagomedov will either TKO Gaethje with ground and pound or trap him in a submission in the later rounds. People say that Gaethje can catch Nurmagomedov with a strike and knock the champion out but that is what they’ve been saying about all his opponents. I do not think that is going to happen and the champion is going to retain his title.

Volkov to win (-172)
The giant Russian, Alexander Volkov, takes on another giant in hard-hitting, Walt Harris, in Saturday’s heavyweight clash. Volkov is a very technical striker with a super gas tank, especially for the heavyweight division. Harris has crazy power but tends to get tired once the fight gets going. Volkov is also far more experienced and has fought more top contenders. Volkov will win Saturday, especially if the fight makes it past the first round.

Hawes by finish (-135)
Coming through Dana White’s Contender Series with a first-round TKO, Phil Hawes will continue his momentum and get a finish over his fellow UFC debutant Jacob Malkoun. Malkoun is undefeated but has only had 4 fights. Hawes is a big step up in competition and I cannot see Malkoun pass that test on Saturday. Hawes will get the finish.

Murphy by decision (-120)
#5 ranked flyweight Lauren Murphy welcomes Uzbekistan’s Liliya Shakirova to the UFC. Murphy is on a 3 fight winning streak and is going to spoil the party for the debutant. She has been in the UFC for 6 years now and has consistently faced top flyweights. Her last two fights have been decision wins and she is going to defeat Shakirova.

Ankalaev by KO/TKO (+100)
Magomed Anakalaev and Ion Cutelaba finally run it back on Saturday after their first fight ended in controversy as Cutelaba was playing some rope a dope, but the referee thought that he was hurt and stopped the fight. Both these guys have serious power, but the higher ranked Ankalaev has the superior skills and will get the finish on Saturday.

Watch the early prelims at 11:00am EST on ESPN+, the prelims at 12:00pm on ESPN2/ESPN+ and the main card at 2:00pm EST only on ESPN+ PPV. These fight are much sooner in the day than usual because it is KHABIB TIME so do not miss them. What a way to close out Fight Island, with the most anticipated PPV of the year!!