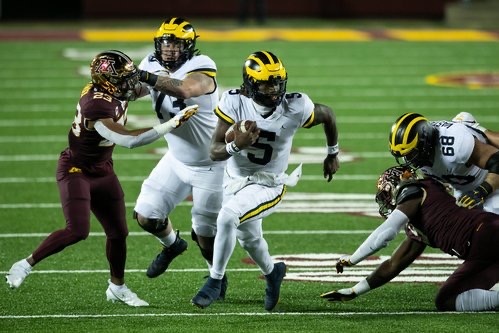 The Little Brown Jug will remain in Ann Arbor for another season as the No. 18 Michigan Wolverines (1-0) beat the No. 21 Minnesota Golden Gophers (0-1) 49-24 at TCF Bank stadium in Minneapolis on Saturday night.

The game started off about as badly as you could’ve written up for Michigan as the team had a punt blocked that led to a touchdown a few plays later to go down 7-0. On the next play from scrimmage, Zach Charbonnet ran it 70 yards for a touchdown to tie the game. In the first quarter alone, the Wolverines would score on a scoop and score by Donovan Jeter, and a pass from Joe Milton to fullback Ben Mason.

Minnesota would give the maize and blue defense a hard time all night, especially with Mohammed Ibrahim running for 140 yards and two touchdowns on 26 carries. However, the team got enough pressure on Tanner Morgan all night and kept Rashod Bateman from making any game-changing plays downfield enough for a rare win over a ranked team on the road.

The Wolverines continue their campaign on Halloween, when they host Michigan State in the Battle for the Paul Bunyan Trophy.