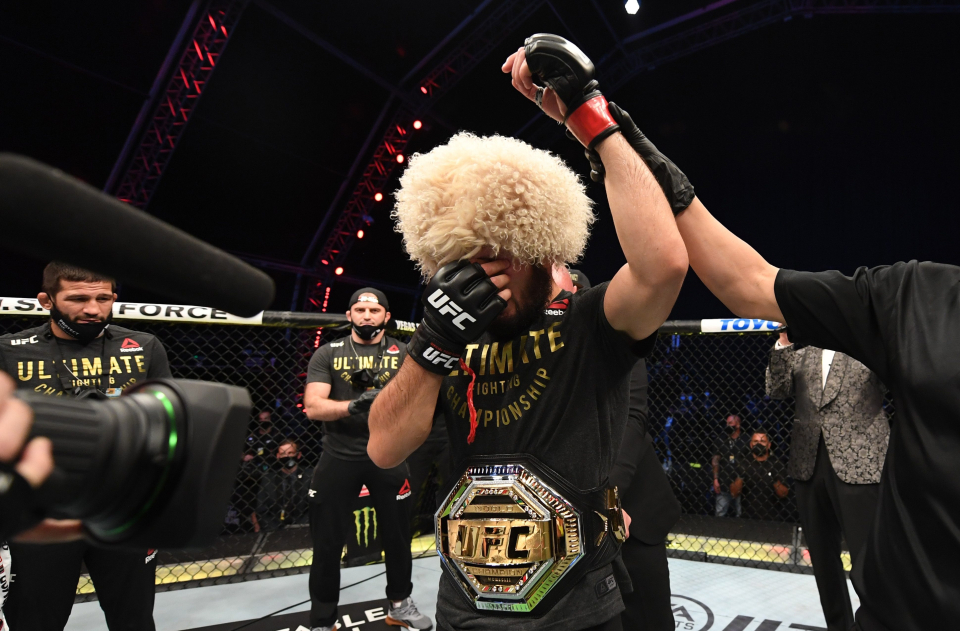 It was a bittersweet day on Saturday for the UFC, especially for the fans of Khabib Nurmagomedov, as “The Eagle” successfully defended his lightweight belt against the interim champion Justin Gaethje and then announced his retirement in his post-fight interview with Jon Anik.

As for the fight, Nurmagomedov was able to maintain constant pressure on Gaethje and land strikes pretty consistently. Moving backwards most of the fight, Gaethje did land a few good leg kicks and a couple of powerful punches but the champion kept coming forward. Nurmagomedov waited until the last minute and a half of the first round to shoot his first takedown, which he completed quite easily, and almost locked in an armbar, but Gaethje was saved by the bell. In round 2, they exchanged on the feet for a minute until Gaethje landed a leg kick, and Nurmagomedov used that momentum to grab Gaethje’s legs for a takedown. He then secured full mount and transitioned into a triangle choke off of his back. That transition was absolutely beautiful and this was the first time we have seen Nurmagomedov get a submission from his back in the UFC.

The boys at AKA (Khabib’s gym) were right in saying that “The Eagle” has way more in his arsenal than he has shown. In what people thought would be the undefeated champion’s toughest test, he earned the fastest win of his UFC career. What a performance from Nurmagomedov who also earned the performance of the night bonus. “The Eagle” was extremely emotional after the fight because of the loss of his father, who had been his mentor and coach. He then left his gloves in the octagon and announced his retirement with a request to be number one on the pound-for-pound list. He was granted his wish by the UFC on Monday morning and rightfully so as he has truly been the most dominant fighter in UFC history, especially in recent times.

Thank you so much to Khabib Nurmagomedov for another spectacular performance and for a truly unblemished career. 29-0 is absolutely ridiculous, especially in a sport like MMA. “The Eagle” has earned his love and respect inside and outside the octagon. A truly one of a kind man, who deserves all the praise that he has received and will continue to receive. I wish he fought one or two more times, but I respect his tough decision to walk away. Good luck Khabib on your future after the UFC. You will be missed!

Although this was not Justin Gaethje’s best performance, he had his moments. He was able to land strikes despite having to keep his hands low, due to the threat of Nurmagomedov’s takedowns.  He seemed a little tired after the first round because of Nurmagomedov’s pressure. Gaethje was still classy as always after the fight, and is still the most exciting fighter in the UFC, and a top 3 contender at lightweight. For his next fight, Gaethje could go up against either former Bellator champion Michael Chandler, #5 Dan Hooker, or #6 Charles Oliviera, but I also wouldn’t mind if he just waited and fought for the belt again. Either way, it will be interesting to see how things turn out for Gaethje and the lightweight division.

1. Although Robert Whittaker did not win a bonus on Saturday, his performance against the favorite Jared Cannonier was superb. He was able to weather the early storm and then comfortably cruise to a 29-28 victory. The former champion kept the dangerous Cannonier at bay with his stinging jab and then dropped him in round 3 and nearly got the finish, which was his best moment in the fight. “The Reaper” showed exactly why he was the middleweight champion and that he is capable of beating any man when he is in the right frame of mind.

2. The rematch between lightweights Magomed Ankalaev and Ion Cutelaba finally took place this past Saturday. Cutelaba walked Ankalaev down all fight and landed strikes, but Ankalaev was winning the fight despite going backwards. Ankalaev got the finish with less than a minute to go in round 1 as he dropped Cutelaba with a right hook and a straight left, then went on to land ground strikes to get the finish. What a fight for Analaev who also won the performance of the night bonus.

3. The catchweight bout between Nathaniel Wood and Casey Kenny was a back and forth brawl for 3 rounds, which earned both fighters fight of the night bonuses. The underdog Kenny won the decision by landing cleaner strikes all fight. Wood however also did his fair share of damage to Kenny and this fight was very competitive.

There were seven more finishes on the card, but unfortunately, they didn’t get bonuses. They include Joel Alvarez (SUB), Miranda Maverick (TKO), Shavkat Rakhmonov (SUB), Tai Tuivasa (KO), Lauren Murphy (SUB), Phil Hawes (KO), and Alexander Volkov (TKO) who all got finishes on Saturday. The entire card delivered top to bottom and it was a great Saturday for those who watched. What a way to sign off from Fight Island!