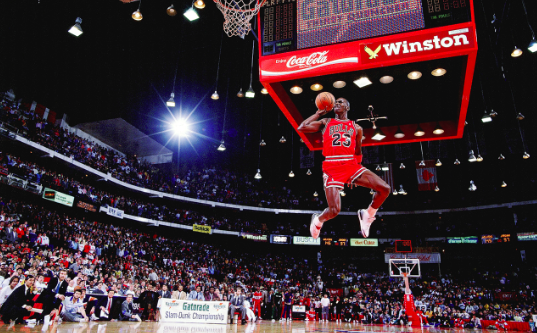 Magic Johnson was the first “all-around player” and the best point guard of all time, averaging almost a triple-double in his career (19.5 points, 7.2 rebounds and 11.2 assists). Magic transformed the point guard position, showing that a bigger player could play the position. Magic was a necessity to one of the best Laker teams of all time, reaching the playoffs 12 times. He ranks 2nd all-time in assists (10,141) after 12 seasons played.

Despite many people believing Lebron James is the best player of all time, I struggle to see him even being the 2nd best player of all time. Lebron could be the best player of all time except that he has never been able to win on his own like MJ. Lebron falls short of 1 and 2 on this list because of his inability to remain loyal to teams and win on his own. During his career thus far, Lebron has played with 3 different teams (Cavaliers 2x, Lakers, and the Heat), winning three NBA championships. However, in order to win these championships, he has had to recruit other all-time greats and NBA all-stars to be successful. Jordan and Kareem did not. Despite these flaws, he is still one of the most talented players of all time. His ability to play four different positions on the court is game-changing, as he may be the first player in history to do this. In his 17th season in the NBA, Lebron currently ranks 4th all-time in points (33,008), 10th all-time in assists (8,860), 5th in all-time field goals made (12,016), and 7th in all-time free throws made (7,213). Like Jordan, Lebron has had a huge impact on the sport of basketball, encouraging and inspiring many young kids to play the game.

No player in NBA history has scored more points than Kareem. In fact, no player has even come within 1,000 points of his NBA all-time leading 38,387 points. Kareem revolutionized the big man position showing that just because you are tall, doesn’t mean you can’t shoot. Kareem perfected the “Kareem” or hook shot making it an almost impossible shot to stop. Kareem ranks top 10 all-time in points (1st with 38,387), games played (2nd with 1,560), rebounds (3rd with 17,440), blocks (3rd with 3,189), field goals made (1st with 15,837), and free throws attempted (7th with 9,304). Kareem was one of the most dominant players in NBA history winning 6 NBA championships with the Lakers and the Bucks. Many people, including other all-time greats like Isiah Thomas and Julius Erving, consider him to be the best basketball player of all time.

Michael Jordan is the best player of all time, hands down. There has never been a player in history as dominant as MJ. Not only did he have an electrifying presence when he had the ball, but he was a menace on defense. In his 15 year career, Michael accumulated 32,292 points (5th all-time), 5,633 assists, 6672 rebounds, 893 blocks, 2514 steals (3rd all-time), and 6 NBA championships while averaging 30.1 points per game in the regular season and 33.4 points per game in the playoffs. Michael Jordan is not only the best player of all time for his achievements and stats but also for his influence on the game. No player has influenced the game as much as he has. When you go to a basketball game and you see a player wearing number 23, it’s because of him.