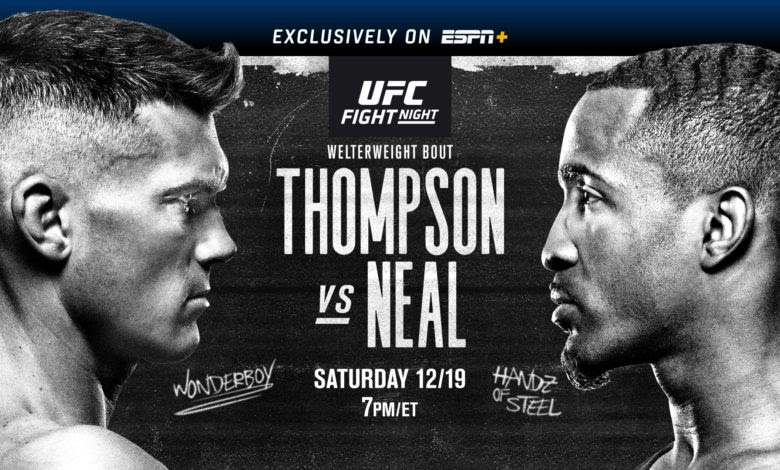 This Saturday the UFC will finish out a wild year with a sneaky stacked card for UFC Fight Night on ESPN+.

Headlining this card are welterweights, Stephen Thompson and Geoff Neal. Stephen Thompson was one of the most decorated kickboxers of all time with a record of 57-0. For those of you that don’t know, “Wonderboy” is an extremely talented and one of the most unique strikers in MMA. The thing that scares me is that he’s 37 years old and in the fight game that’s ancient. Thompson hasn’t finished an opponent in years. I’m not too confident in him as he heads into the 22nd pro MMA fight while he’s 2-3 in his last 5 fights.  Geoff Neal is on a 5 fight win streak at the moment over some of the best competition the welterweight division has to offer.  Neal has only been finished once in his career thus far and it wasn’t even in the UFC. (it was against current fighter of the year candidate Kevin Holland) The thing is that if he can box with Thompson then we have a great chance to win, if not then Thompson is going to create it into his own karate match where Neal isn’t going to win. There’s no way I see this fight going the distance.

The Co-main event is Jose Aldo and Marlon Vera. It’s wild to think Jose Aldo is 34 years old; it seems like he’s been fighting forever. I’m going to sound incredibly biased here but there’s no way I see Jose winning this fight. I also absolutely F&$!-ing hate Jose Aldo. He should have retired after this happened to him…

In all seriousness, Aldo is in desperate need of a win after what has been a rough couple of years for him. Marlon Vera is the 15th ranked bantamweight in the world. He’s coming off a victory over Sean O’Malley. That fight lost me and my friends a lot of money. I actually hated Vera for a little bit because of that. But I’m all in on him beating the hell out of Jose Aldo. That being said Vera’s resume isn’t that impressive so a win over a former champ like Aldo would be huge for him. If this fight goes the distance then Aldo will probably win, if not that means Vera TKO.

The fight before the co-main event is Michel Pereira and Kalinin “Khaos” Williams. This might be the most interesting matchup of the entire night and potentially of 2020! Yeah, I said it. Do yourself a favor and look up the highlights of these two. Pereira’s still acrobatic and explosive style of fighting is extremely entertaining but scary as hell from a gambler standpoint. But since his last loss, he’s been less of an idiot and more of a BMF by beating the hell out of his latest opponents.

Khaos Williams… His last two fights together have lasted less than a minute. Are we about to witness a rise of a potential superstar?  He’s got the name that’s for sure. In his last fight, he might’ve been the most intimidating person I have ever seen. But it’s hard to say if he’s good or not because we haven’t seen him fight enough. It will be hard to bet on it being so either man. Both are talented and I expect fireworks and I simply have no idea what’s going to  happen.

Another intriguing fight on tonight’s card is Marlon Moraes and Rob Font. Moreas, was supposed to be a champion or a legitimate contender by now, but has been in a slump after some close decision losses. On the other hand, Font is a young fighter trying to pick bigger wins to really get rolling in the UFC. I don’t see Moraes losing this fight.

Some other great fights on this card are Marcin Tybura facing off with former NFL all-pro, Greg Hardy.  This should be interesting, especially if Hardy can pull off the win.