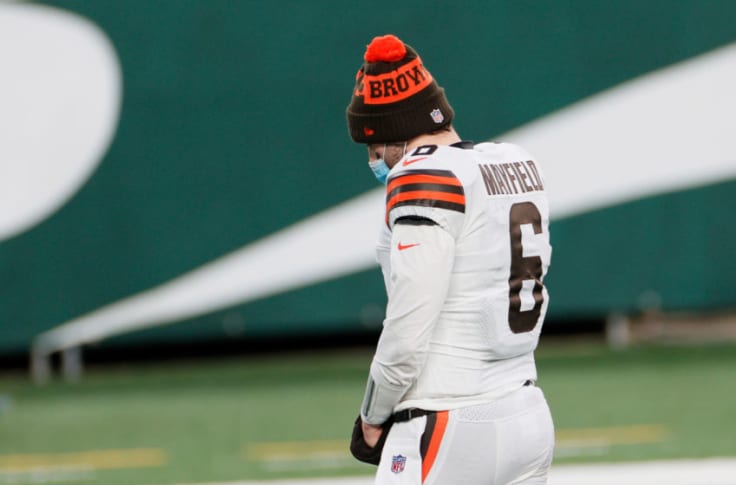 Like any picture, the one above says a thousand words. Just when the Browns accumulated their first winning season since 2007, where they finished at 10-6, their easy path to the playoffs took a sudden turn. After their shocking loss to the Jets, the Browns dropped to the #7 seed in the AFC, now hanging onto the playoff bracket for dear life. Could the Cleveland Browns Curse still be alive?

The Browns have not made the playoffs since 2002 – when Baker Mayfield was six years old! He is now 25. It is greatly impressive that he guided an AFC team to 10 wins, but tell that to the other four 10-win teams in the Wild Card race. Following his victory over the Giants a week prior, everyone in Brownsville sensed a long-awaited playoff berth. All they had to do was beat the Jets and hope that the Ravens or Colts would lose their contests. The only thing is Mayfield had to play without his top targets – Jarvis Landry, Rashard Higgins, and Donovan Peoples-Jones – who were listed as close contacts of a positive COVID test within the organization. It proved to be costly as they lost 23-16. They are expected to rejoin the Browns’ facility on Thursday.

Denied of their playoff-clinching, the Browns dropped from the top Wild Card seed to the bottom instantly following wins by the Ravens and Dolphins. Lucky for them, the Colts lost to the Steeles which keeps Cleveland (10-5) in the playoff picture. However, Cleveland may be doomed on Sunday.

First, they play their rival Steelers – who are choosing to play Mason Rudolph and give Big Ben some rest heading into the playoffs. Hosted in Cleveland, this game might turn personal, as everyone expects that Rudolph is looking to seek his revenge on Myles Garrett for the infamous helmet incident a year ago. He could do so by denying Garrett’s team their first playoff appearance in almost two decades. Although Coach Tomlin has stated that his team is not focused on eliminating them from playoff contention, realistically, a victory would give Rudolph instant gratification.

To stir the pot even more, beating the Browns would also claim revenge for their 2018 Week 1 tie that would wound up costing the Steelers the AFC North title and postseason (yes, along with their off-the-field drama). The Steelers finished 9-6-1 behind the 10-6 Ravens.

Second, if the Browns were to lose, they would need a Colts’ loss to assure their playoff security. Only problem is that the Colts play the Jaguars. Unless one believes that the Jags will pull off a ‘Jets’ against Philip Rivers, Jonathan Taylor & Co., expect the Browns game to be the deciding factor.

In short, the Cleveland Browns went from being self-certain of a postseason berth to now suddenly fighting for their playoff lives. Sunday’s game – win or lose – will be the most intense Browns game in recent memory. As for the Browns Curse: will it live or will it die?