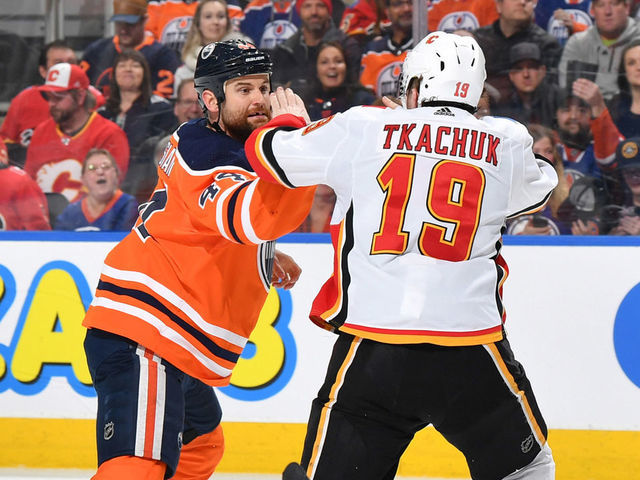 Before we go ahead and talk about Wednesday night’s battle, we have to take a step back and look at the events that transpired between the Flames and the Oilers just under two weeks ago. The short version is Flames player Matthew Tkachuk, and Oilers player Zack Kassian, hit each other HARD a bunch a times in a row and this eventually led to Kassian jumping Tkachuk to try to get him to fight, but Tkachuk did not answer. Non-pleasant words were exchanged by the two players to the media after the game. This led to a much anticipated matchup between the two teams only a little over a week later…

Last night’s matchup of the Battle of Alberta had EVERYTHING an NHL fan could and should ask for; skill, hard hits, fights, and an AUTHENTIC dislike for the other team. In my books, that’s the perfect hockey game. We’ll start last night’s highlight reel with the spirited fight between Monahan and Nugent-Hopkins in the 1st period:

Folks, that’s a big-boy hockey fight…Two guys that clearly do not like each other.

Just seconds later… the matchup we had all been waiting for, Kassian vs. Tkachuk

RESPECT to Matthew Tkachuk, Kassian is not in his weight class and he answered the bell after last game’s doings. While I don’t think this is the last time we see these two players square up against each other, I do think that in regards to last game and getting revenge both guys got what they wanted in last nights game and that score has been settled, for now.

The action didn’t stop there…The game ended up going into a shootout and this is how David Rittich, the Flames goalie, decided to celebrate…The old hockey stick flip in the enemies building no less.

NHL fans should be pumped up that the Battle of Alberga is officially back and it looks like it’s not going anywhere anytime soon.