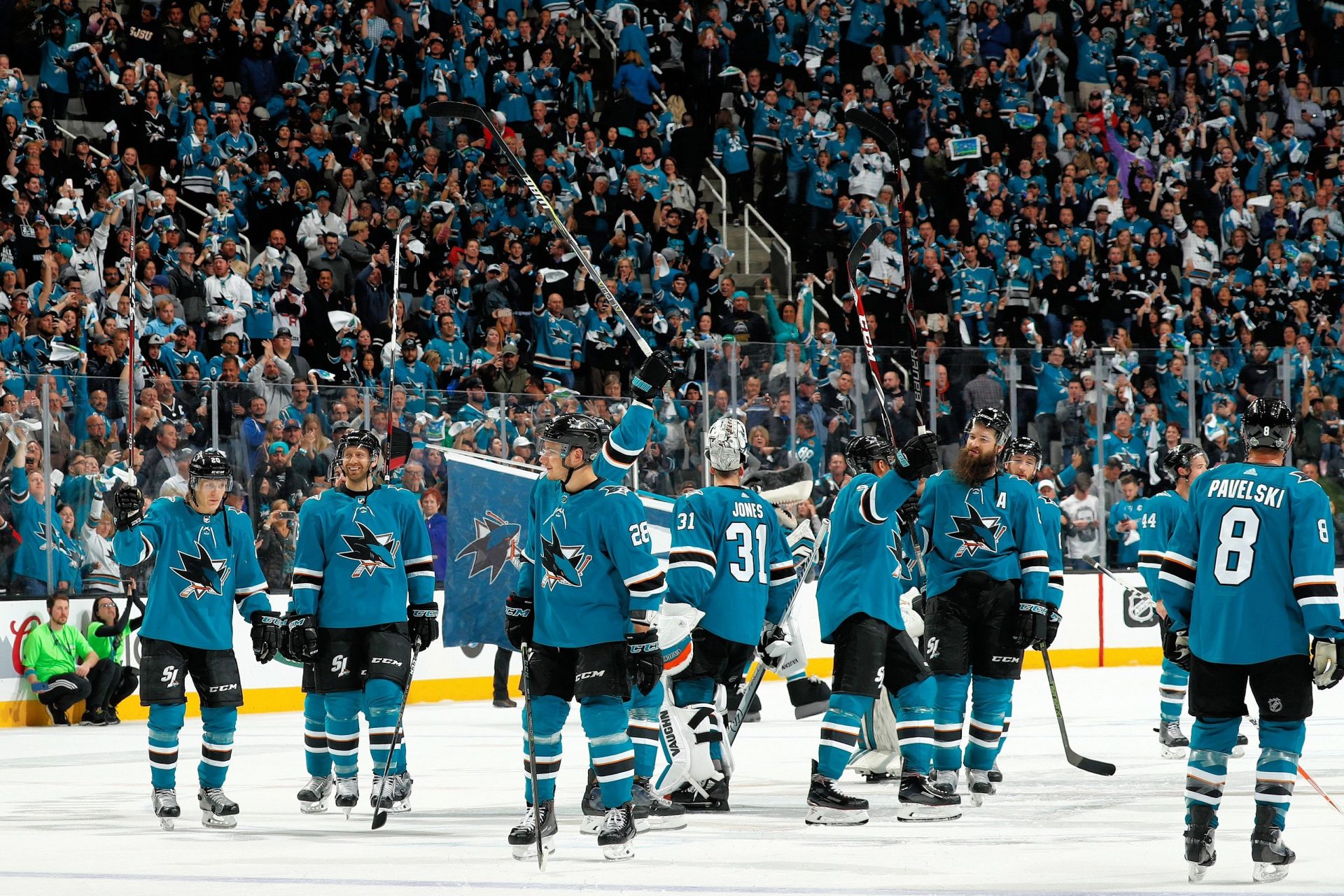 The Sharks have won 6 straight and are now one of the top 2 teams in the Western Conference, but are they the true favorites to win it?

After a 7-2 throttling of the Vancouver Canucks Monday Night the San Jose Sharks have found themselves in a great position in the Western Conference. San Jose certainly has been buzzing as of late winning six games in a row. The Sharks buzzing wasn’t always the case at points this season specifically early on. San Jose were once upon a time 12-10-5 and in the midst of a 4 game losing streak in early December. Erik Karlsson was still adjusting to San Jose and it was showing on a nightly basis as he struggled initially.

However, from that point forward the Sharks have gone 22-6-2 to elevate their record to 34-16-7 (75 points). Karlsson along with the rest of the team have clearly appeared to have found their games. That is a major key to their team success, but there are others. First of all, this team is too good to struggle for long periods of time. General Manager Doug Wilson built a roster for the now and a roster that is all in to win a Stanley Cup. It took a little longer than anticipated for the chemistry on this team to morph into winning hockey, but it certainly has now. Ultimately, I believe the main reason for their success is the balance and depth in their lineup from both the defensive and forward perspective.

Let’s start with the defense Brent Burns is playing at a Norris Trophy level right now as he currently has 63 points (11 G, 52 A) in 57 games thus far this season. Erik Karlsson has been looking like the old Erik Karlsson after a rough first two months of the season. In 47 games played Karlsson has 43 points (3 G, 40 A). Then there is the defensive stalwart Marc-Edouad Vlasic. The 31-year-old Vlasic is not going to be on the score sheet often (47 GP, 1 G, 11 A, 12 PTS) but, he is a leader and terrific in his own end. Vlaisic has had an up and down year to this point, but is rounding into form just like the Sharks seem to be. Add in veterans like Brendan Dillon and Justin Braun and this D-Core is rock solid to say the least.

The forward group for the Sharks is awfully impressive too. Tomas Hertl is having his best season yet with Sharks. The 25-year-old Czech is currently leads the forward group in points and has become a point per game player. (52GP, 26 G, 27 A, 53 PTS). Logan Couture has also been his same consistent self and is an important piece to this locker room. In a young man’s game, the 29-year-old Couture has become a seasoned vet for the Sharks. Couture currently has 51 points (20 G, 31 A) in 57 games. It doesn’t end there for the Sharks though in fact its far from it.

The Captain Joe Pavelski is back to scoring goals at a prolific rate after a down year last year. He has been the Sharks best goal scorer as he currently leads them with 30. Another player that has been great for the Sharks is Evander Kane. Kane has been awesome since being acquired by Doug Wilson at last years’ trade deadline. He has fit so well in San Jose that this past offseason the Sharks extended him to a 7 year, $49-million-dollar deal. The investment has paid off so far as in 57 games Kane has 49 points, including 26 goals.

The only concern I really have with this team is in net. Martin Jones is having the worst season of his career. Jones currently has a GAA of 2.88 and a .899 save percentage. Jones however, is playing better of late and he has been money for the Sharks the past three seasons prior to this one. His first season as the starter resulted in a Stanley Cup Final appearance. Listen, everyone is due for a tough year and this season seems to be Jones’s rough year up to the midway point. However, I do expect Jones to continue to improve and be the goalie we have seen in the past down the stretch and most importantly come playoff time.

In saying all of this are the Sharks truly the best team in the Western Conference and the team that will represent the West in the Stanley Cup Final? It is way too early to tell that. Calgary who has lead the conference for most of the season has two games in hand, are one-point back of the Sharks and look like a force to be reckoned with. If San Jose doesn’t have the deepest lineup in west than many could point to Winnipeg as the team that does. They are playing great hockey and look primed to make another run in the playoffs and get past the conference final. Then, there is Nashville who are going to be just a big of a threat in the West as the Flames and Jets.

One thing I do think the Sharks have going for them is that they have truly gotten better as the season has progressed. As fans I think we get all caught up in the teams that are just powerhouses in the regular season and peg them as the automatic Cup favorites (I’m looking at you Tampa Bay and the 2010-17 Capitals). What folks need to realized is the NHL season is an 82 game marathon. If you struggle early on in the season that’s alright. What matters the most is how you finish I believe and history usually is in my favor with this, the teams that struggle or are under the radar, but constantly get better as the season goes on are the biggest threats come playoff time.

I look at the 2014 New York Rangers who were god awful the first half of the season, but progressively got better as the season went on. They had a great second half and made it to the Cup Final. The 2016 Pittsburgh Penguins fired their head coach midseason, Sidney Crobsy had the worst first half of his career and the team was struggling to put it together. Bit by bit, Crosby got his game and went on unstoppable the rest of the season. The team made changes in player personnel as well and called up young players from the AHL who would make a difference. Team chemistry developed, key trades were made and the Penguins went into the playoffs that year the hottest in the league. They won the Cup.

The Predators were the sixteenth and final ranked team in the playoffs the next season (8th in the West), but prior to that were improving as the season went on. That carried into the playoffs and led them to a Cup Final, Finally, last year the Capitals were under the radar all season, improved each month and found themselves hoisting the Stanley Cup when it was all said in done.

I know its only February, buy if the Sharks keep this pace up and keep improving, I like their chances come playoff time to finally win a cup for Jumbo Joe.