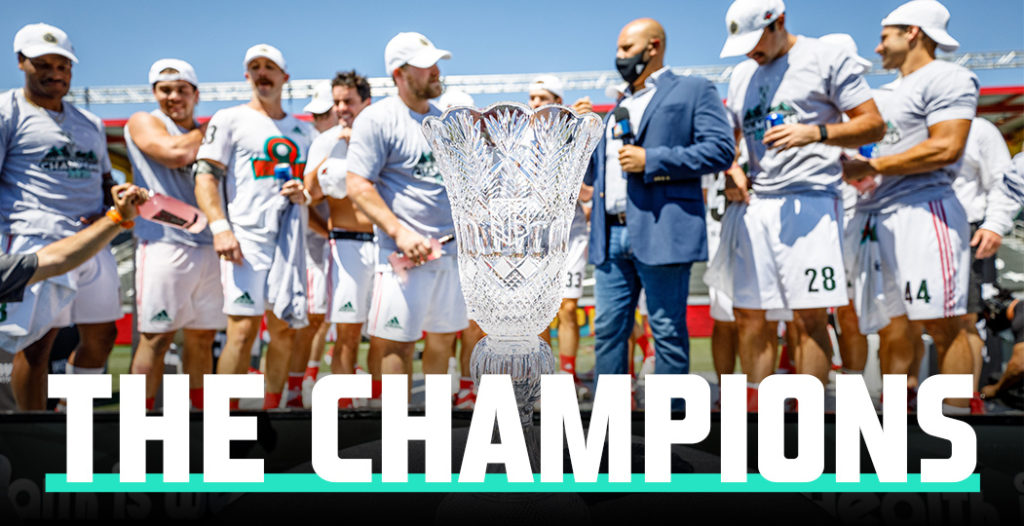 The Championship Series has come to an end just as quickly as it began, and the Whipsnakes have repeated as champs, led by Matt Rambo and Zed Williams, who was named MVP after a SIX (6) goal performance in the championship game. The Premier Lacrosse League released their top 3 candidates for each positional award, beginning with Attackmen of the Championship Series.

Last season, Matt Rambo won this award as well as League MVP, and this season I predict a similar outcome. Zed Williams, MVP of the Championship Series, is my choice for Attackmen of the Championship Series. Williams finished with 20 goals in 6 games, nearly lapping the competition. The way he bullied his matchups and got hot at just the right time nearly every game was the key to the Whipsnakes dominance offensively, that along with being paired with one of the best feeders in lacrosse, Matt Rambo, who led the league in assists and points for a second straight year. While I am not a fan of players winning both a positional award and MVP, “Zeddy ball game” earned this award with his performance in the Championship Game alone.

Sergio Perkovic makes a strong case for this award, specifically with his unbelievable ability to hit two-bombs like they’re layups on the crease. If there was an award for Most Improved Player, it would absolutely go to Perk after becoming one of the most lethal two way players in the PLL. However, Tom Schreiber led an explosive Archers offense that took the league by storm. Schreiber, aka “Captain America”, led all midfielders in points while shooting 41% throughout, a mark unheard of from a player handling the ball as much as he does. Schreiber was the spark for a 3-1 Archers team, and should edge out Perkovic and John Haus for this award.

No disrespect to Reece Eddy, who was great all year, but this award has been a two-way race all season between Michael Ehrhardt and Scott Rattliff. Ehrhardt, who won this award last year, was a beast on the defensive side, consistently out-hustling his opponents and bullying whichever middie was misfortunate enough to draw the pole. However, Rattliff’s work on the offensive end was a thing of beauty, facilitating the transition game and looking like an offensive midfielder at times, aspects that don’t necessarily show up on the stat line. However, what separates Ehrhardt from every LSM in the league, besides his defense, was his work on the faceoff wings. Ehrhardt’s group, led by Joe Nardella (see below), led the league with a 70% win percentage (next best was Chrome at 57%). While Nardella won the matchup on the ball, Ehrhardt terrorized opponents when it became a 3v3 ground ball, picking up 26 ground balls in the process. For a second straight year, Ehrhardt wins this award.

This is another award that is always so tough to pick only three candidates. Garrett Epple once again was the enforcer on an extremely physical Redwoods defense. Jack Rowlett is a young, scrappy player who I believe will be a consistent candidate for this award for years to come. However, when it comes to team success, Matt Dunn was the best defenseman on a defense that allowed a shocking 8.5 goals per game, and consistently took on the opponent’s best attackman. Dunn is a strong, physical presence who has the ability to lock down even the best players in the league, and should be an easy decision on this award.

Ty Warner and Will Haus are both fantastic players and gave their defense the ability to play as if they had five poles on defense. Many games, Ty Warner even took on the opponents best midfielder, allowing Ehrhardt to roam and play a free safety role on the Whips defense. However, Jack Near was on another level this season, and should win this award without much argument. I think the PLL nailed it with these three candidates, and I genuinely hope Ty Warner wins this award sooner rather than later, but this year? Jack Near all the way.

Credit to Connor Farrell for having a great Championship Series, and for being a key reason for Chrome LC’s 3-1 record in pool play. However, a week ago Joe Nardella was my choice for MVP of the Championship Series, and had Zed Williams not had 6 goals in the Championship, I would have stuck with that pick. Nardella absolutely dominated every team’s faceoff unit, and his chemistry with his wings put the Whips above the rest. It’s much easier to win games when you get the ball 3 out of every 4 times there’s a faceoff. Nard’s stat line: 72% FO, 65 GB, and 3g, 3a. Wow.

Finally. Goalie of the Championship Series. In 2019, when Blaze Riorden edged out Kyle Bernlohr for this award, Bernlohr let his frustrations be known. This year, I think it will be Blaze who will feel disrespected, as Bernlohr should win this award after allowing 8.5 goals per game and averaging almost 14 saves per game. Yes, Blaze absolutely stood on his head in the Championship Series, racking up multiple 20 save games and finishing with 119 saves, or 17 per game. However, Bernlohr shouldn’t be punished for having a much better defense around him, and Bernlohr stood the tallest when it mattered the most, closing the Championship Game with 16 saves at 73%, securing his spot for this award.