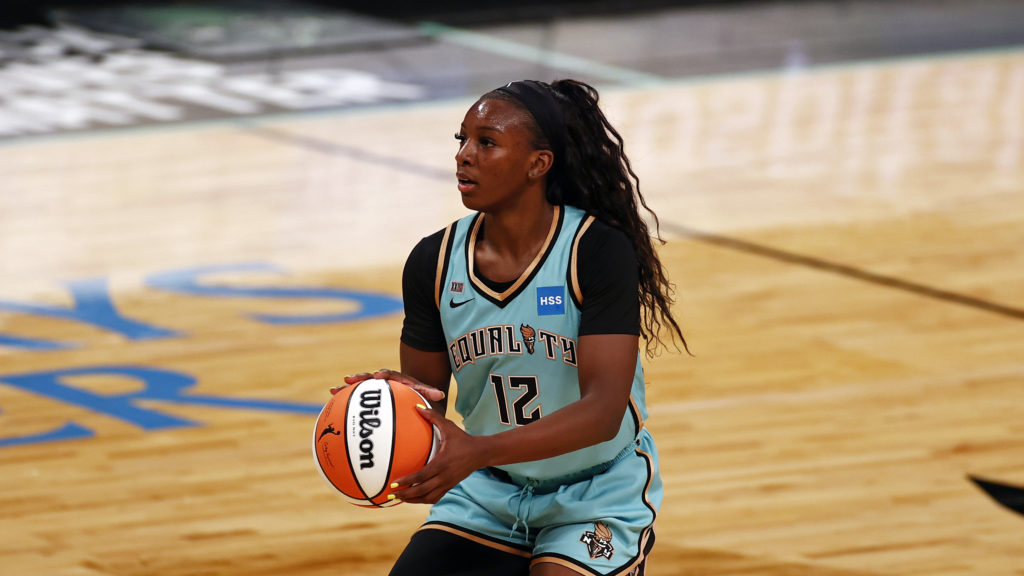 The New York Liberty (10-9) are off to a hot start, rebounding from last year’s ugly campaign while having quintupled their win total from their disappointing 2-20 finish in 2020 – their worst in franchise history. Winning their first two games of the season, the Liberty matched their 2020 win total in ten fewer games. Thanks to efforts from two notable off-season pickups, two top draft picks, and a few members off the bench, the team is now playing like a playoff contender. With the All-Star break around the corner, here is a brief recap of the Liberty’s first-half:

In her first year wearing seafoam, Laney is averaging 19.6 points per game – the most for her team – and currently leads the Liberty in field goal percentage with .502 (minimum of 12 games). Starting in all 19 games for the Liberty, she lead her team in scoring in 11 games – tallying 20+ points in 8 of them. She is currently fourth in the league in points scored with 372; fifth in points per game with 19.6; fifth in assists with 100; and sixth in assists per game with 5.3. For her performance efforts as well assisting her team’s turnaround, she was selected to her first career All-Star Game. Betnijah Laney might be one of the Liberty’s biggest off-season steals in recent memory.

Coming off a stellar college career at UCLA where she received Freshman All-Pac 12 and three All-Pac 12 honors, 2021 sixth overall pick Michaela Onyenwere might be one the Liberty’s best draft selections in recent years. Onyenwere emerged on the WNBA scene in her debut, scoring 18 points in 29 minutes in the Liberty’s season-opening 90-87 victory against the Indiana Fever. She then had the game of her life in their 90-87 loss to the Atlanta Dream on May 29th, leading the charge with 29 points with 6 three-pointers. Starting in every game for the Liberty so far, she currently leads all rookies in three-pointers and points, both per game and in-total. Capturing this season’s first two Rookie on the Month awards, Onyenwere is putting up a solid Rookie of the Year campaign. While showing signs of progression, Onyenwere is also proving her potential as a face of the franchise.

Sabrina Ionescu came into her second year in the WNBA looking to avenge her injury-plagued 3-game rookie season a year ago. Currently third in assists both total (107) and per game (6.3), the former Oregon Ducks sensation is finally living up to her hype. She began her de facto rookie season strong, scoring 25 points while adding 4 three-pointers and 7 free-throws in the Liberty’s aforementioned victory against the Fever. Only two games later, the NCAA Division I all-time leader in triple-doubles scored her first such performance in her professional career, totaling for 26 points, 10 assists, and 10 rebounds in New York’s 86-75 win over the Minnesota Lynx. While emerging as a rising star, Ionescu started her first six games scoring in double digits.

But then, the injury bug returned as Ionescu missed two games due to ankle tendinitis – the same ankle that derailed her rookie season. Upon returning from injury, her performance regressed in her first four games back, shooting 3/20 overall while averaging 4.5 points per game. Her next four games saw a resurgence, shooting 16/28 and averaging 11 points per game with 6.5 assists. In Monday’s 99-96 win over the Dallas Wings, Ionescu scored 13 points, 12 assists, and 2 blocks – the fourth such occurrence in WNBA history. Ionescu accomplished the feat twice this season, becoming the first player in league history to put up this stat-line more than once in a career. Despite a rocky beginning, Ionescu hopes that the worst is now behind her. Just let her game do the talking.

Having been acquired by the Liberty following her championship run with the Seattle Storm, Sami Whitcomb is having herself a career season in her fifth year in the league – one that can result in claiming this season’s Most Improved Player Award. In her first four seasons, she averaged 5.5 points per game, with her previous career high being set with 8.1 in 2020; she also averaged 14.3 minutes per game.

Starting in every game for the Liberty – she only started 13 games in her career prior to joining the team –Whitcomb sits atop the league in three-point field goals with 53; she also has a fourth-overall three-point field goal percentage of 45.3%. She also has 12 games scoring double-digits; 8 games scoring 13+ points; and a team-leading 30-point performance in which she tallied 7 three-pointers. 22 of her points were scored in the first-half alone. In the process, she has set career highs in points scored both in total and per game, field goals made, and blocks. She also set personal bests in both defensive and total rebounds, which also leads the team. Much like Laney, Whitcomb is proving not only to be a steal, but she also may have found her rightful home in New York.

As for the bench, the two that have stood out are Rebecca Allen and Jazmine Jones.

Rebecca Allen has shown that her play can be the difference maker as she leads the Liberty bench in scoring with 8.9 points per game, and has done a good job staying out of foul trouble with only 23 fouls in 14 appearances. Scoring in double-digit figures five times, Allen filled in the void during Ionescu’s recovery, scoring 14 and 19 point efforts while going 9/19 from deep. Her signature game came in the latter effort against the Los Angeles Sparks, where on top of her scoring, she made two game-saving blocks from three-point range in the final seconds to preserve a 76-73 victory. Allen recently went down plantar fasciitis in her foot, and is unlikely to return before the All-Star break. Hopefully she’ll be ready to go by the time the team returns to action on August 15.

Much like Allen, Jones has provided some damage that proved to to be the difference-maker. As the second-place holder in scoring off the Liberty bench, Jones leads the bench in points and three-point shooting percentage with 42.5% overall (17/40). Jones also leads the bench in games scoring 10+ points with six – 3 of them were 16+ point games that resulted in much-needed victories. The second year player out of Louisville and a member of the 2020 All-Rookie Team looks to continue her hot streak and finish her first-half strong.

Now sitting tied for second place with the Chicago Sky in the Eastern Conference, the Liberty play the last-place overall Indiana Fever (2-16) for final time this regular season at 7:00 P.M. EST in Indiana, hoping to complete a three-game season sweep and go on a three-game winning streak. They are currently on their first win streak since starting the season 5-1 over a month ago. Go Liberty!