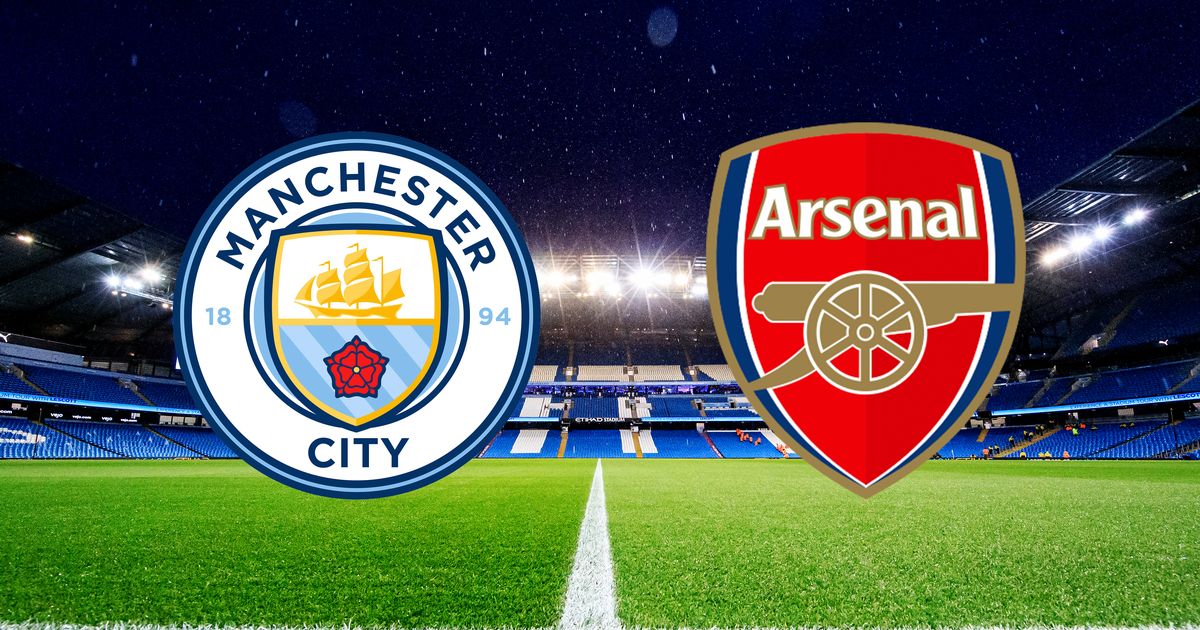 The first day of the Premier League’s “Project Restart” kicked off in style as the second match of the day featured a clash in rainy Manchester between two traditional heavyweights. Arsenal FC traveled up to take on Manchester City in a battle between 9th and 2nd place respectively.

The match began with a moment’s silence around the center circle in thanks for the the British NHS workers continuing to work on the front lines of the COVID-19 pandemic. This was followed by a gesture in solidarity with the Black Lives Matter movement sweeping the globe. After referee Anthony Taylor blew the whistle for kick-off, each player took a knee in support.

The Gunners began the game in a 4-2-3-1 formation with Pierre-Emerick Aubamayang leading the line, while youngster Edward Nketiah was given the start in midfield. Left-back Kieran Tierney was given a shot in defense after a lengthy spell out with injury, while Bernd Leno maintained his place in goal.

Manchester City deployed their typical 4-3-3 formation, albeit with some personnel changes. Gabriel Jesus was given the start ahead of Sergio Aguero, while Ilkay Gundogan was played in midfield. Center-back Aymeric Laporte made his first start since a terrible knee injury back in September, and Ederson kept his spot as City shot-stopper.

The first chance of the game fell to City as Kevin De Bruyne forced a good save from Leno from a free kick in the fifth minute. The attempt came after Bernardo Silva was fouled by Granit Xhaka on the edge of the box.

Xhaka was forced off the pitch only a few minutes after committing the foul which gave City a chance after a collision with one of his own teammates left him in need of a stretcher only seven minutes into the match. He was replaced by Dani Ceballos.

Arsenal got their first clear chance through Nketiah after the winger was found in the City box through a Bukayo Saka cross. The attacker did well to make himself available, however his effort was seen well wide by Ederson.

More injury troubles for Arsenal came about after 22 minutes, as center back Pablo Mari was forced off with a muscle injury in his calf. He was replaced by Brazilian David Luiz, a substitution which allowed Arsenal to employ a bit more of a ball-playing style from the back.

With a quarter of the game gone, the match had yet to settle into a consistent grove. City found themselves typically on top of the possession stats, yet neither team had created much in the way of clear cut chances. The midfield battles were worth watching as both teams attempted to gain control over the center of the park, while Arsenal seemed to look to bypass the midfield altogether with long balls in behind to Sako and Nketiah.

Leno was forced into his second good save of the first half after he denied Raheem Sterling after 34 minutes. Sterling was found on the left edge of the box by a marauding David Silva before cutting in and unleashing a powerful drive that was turned away for a corner.

Sliva had a chance of his own only minutes later after Jesus slid a reverse ball along the floor into the penelty area to the Spaniard. Sliva attempted to beat Leno with a first time, left-footed strike down to the keeper’s left, but was denied by a Leno in midseason form.

City continued to mount the pressure as Leno was yet again forced into a save, this time from Algerian winger, Riyad Mahrez. He was found off the right by a brilliant ball from De Bruyne, but his strike was calmly blocked by Leno to keep things scoreless after 40 minutes.

Arsenal won a free kick in the 42nd minute, however the opportunity to snatch a goal against the run of play went begging as Shkodran Mustafi failed to make contact with Sako’s delivery into the box.

City finally took the lead in first half stoppage time after a mistake from the substitute David Luiz gifted the Manchester club a chance. A hopeful ball into Arsenal’s right channel from De Bruyne bounced awkwardly in front of Luiz causing the defender to make a mess of the clearance. The ball spun off his thigh and into the path of Raheem Sterling, who had read the mistake brilliantly, and the Englishman made no mistake with the finish, unleashing a rocket half-volley past Leno from 10 yards out. Moments later the half-time whistle blew, meaning City went into the break a goal up.

The second half began in much the same style as the first, with Man City dominating possession and midfield play while Arsenal looked to get in behind on the counter attack. Neither team made any changes during half time.

Five minutes in, both Arsenal and David Luiz’s afternoons went from bad to worse, as he brought down Mahrez inside the box to give away a penalty to City. Mahrez cut in from the right and beat the defender into the penalty area, before being cynically dragged down and denied a goal scoring opportunity. David Luiz was shown a straight red card for his actions, meaning that his afternoon involved 30 minutes of play, a red card, a penalty conceeded, and a mistake leading to a goal. De Bruyne stepped up to sweetly slot the spot kick away to the right to give City a two goal advantage over and Arsenal squad now down to 10 men.

City nearly grabbed a third goal after 63 minutes after a back to front move beginning with Ederson led to a Gabriel Jesus cross into the box. Thankfully for Arsenal, Leno was able to snatch the low cross before the ball made its way to Sterling and an open net.

De Bruyne was substituted in the 70th minute and replaced by Rodri, but not before stinging the palms of Leno with an effort from 12 yards out. The Belgian struck the loose ball well after he was found by Sterling with a knockdown, but Leno did well to not keep the floodgates closed. 70 minutes also saw the conclusion of Laporte’s afternoon as he was replaced in defense by Fernandinho.

The second half water break came as a relief to Arsenal, as until that point City had been twisting their grip on the game even tighter. The home side had increased their possession total to 70% and had hardly let the Gunners get a touch of the ball, leading to an utterly dominant display.

Kieren Tierney was shown yellow after a late challenge on Gundogan 30 yards from the Arsenal goal after 77 minutes, and the ensuing free kick nearly paid off. Sterling played a disguised ball into the path of Gundogan, who saw his low strike turned away by his German counterpart in the Arsenal net.

City were shown their first yellow card of the game a few moments later, as Rodri was booked for a cynical foul denying an Arsenal counter attack, and this led to City’s final substitution, as Sergio Aguero came on to replace Jesus.

A scary moment occurred in the 80th minute for the home side, as a collision forced center back Eric Garcia off the pitch with a head injury. A hopeful ball in behind from Arsenal’s Tierney towards Aubameyang forced the Spanish defender to turn and run towards his own goal, only to be met full force by a charging Ederson as he attempted to clear the ball. The clash between teammates left the Spaniard worse for wear, as he went to ground instantly and the whistle blew. Minutes passed before Garcia could be carefully stretchered off; he did not appear to be moving and was wheeled down the tunnel to a waiting ambulance.

90 minutes came about with 11 minutes of stoppage time due to Garcia’s injury, and that proved to be just enough for two City subs to combine for the third goal of the game. Aguero drove forward from midfield before feeding Sterling on the edge of the box, only to be played through by the winger and shooting low with his left. Leno did brilliantly to deflect Aguero’s effort onto the post, however his defenders let him down once more as they were too late to react allowing Phil Foden to strike home off the rebound.

Aguero nearly made it four for City with five minutes remaining in stoppage time after he was found nicely with a through ball from Foden. However the Argentinian’s powerful drive was watched wide at the near post and struck the outside of the net.

Arsenal made a late push in the final minutes, yet the only result proved to be a corner kick after Reiss Nelson’s cutback to Aubamayeng was speared wide by the Gabon international. This proved to be the last action of the match, as the game blew to an end with a convincing 3-0 win for Manchester City in their first game back.