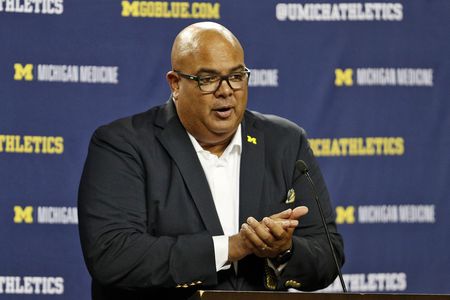 For the first time in about 100 years, The Game will not be played. Michigan continues to deal with extensive Covid-19 cases within the team and was deemed to be in no shape to play. This is the program’s second straight cancellation, as they canceled the previous game against Maryland for the same reasons.

I’d be lying if I said I didn’t get some enjoyment out of this game being canceled. Did I really want to see my beloved team get destroyed? Michigan was playing some of its worst football in the past 20 years before the infections went up and showed no signs of getting better. The offense couldn’t get a rhythm, the defense has been the college football equivalent of swiss cheese and the special teams have a knack for falling flat when it matters. It’s safe to say that if The Game was played, the Buckeyes would’ve run them out of The Shoe before halftime.

What DOES upset me isn’t necessarily that the game was canceled, it’s how I feel Warde Manuel and the Michigan administration will use this cancellation to their advantage.

It’s hard to pinpoint just one reason why they would do this. There’s the fact that the university invested millions of dollars into this man and that firing him now would probably make them look bad. It could be that they feel Harbaugh has brought a level of stability that they can roll with for a couple more years. Maybe they don’t feel like there’s anyone more fit for the job than the former Michigan quarterback himself.

The cancellations on Michigan’s schedule are unfortunate, but they’re not losses. The administration could look at the hideous numbers from this season and say “The season was so short! We’ll have to give this staff another chance!” even though most of the issues at hand have been getting progressively worse for years. As Don Brown, whose defense has allowed 37points and 458 total yards per game while registering just 1.25 sacks and 0.5 takeaways a game dating back to last year’s edition of The Game. Ask Wilton Speight, Shea Patterson and Joe Milton, who have failed to be developed into the kind of guy Harbaugh was known for cultivating at Stanford and with the San Francisco 49ers.

Let me make one thing clear. I’m not saying they should have played these games. Far too many players were either infected or had to sit for contact tracing. Playing these games would’ve meant putting the team and their opponents at risk and there wouldn’t have been enough healthy players to make anything happen.

As to whether or not Michigan canceled to avoid being humiliated. Who knows? Judging by Manuel’s response to Kirk Herbstreit last week, you’d think the answer was probably no. Thing is, no rant can put a veil over how badly the maize and blue have been manhandled by the scarlet and gray this past decade.

What I am saying is that the fewer games being played, the better the numbers for the 2020 season seem. No matchup against Ohio State means no chance of letting up 60 points and the entire country seeing-once again-that Michigan football is nowhere near the level it needs to be on.

I hope to God I’m wrong about all of this. I hope that Harbaugh and the program part ways and that they don’t harp on wanting a “Michigan Man” to replace him. Unfortunately, in the words of Harbaugh’s predecessor, “This is Michigan for God sakes.”