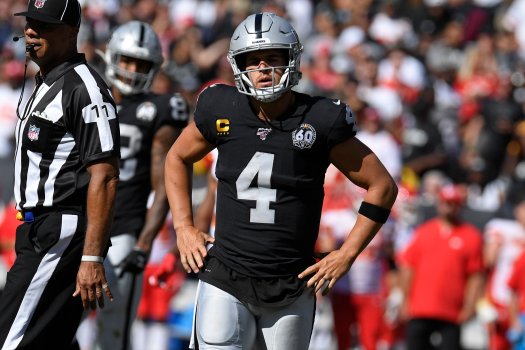 The unthinkable was said on this week’s episode of The Nosebleed Sports Talk podcast. Ross Sutton, my co-podcaster, when asked who his favorite football player was responded with the one and only, “Derek Carr.” Nope, this is no joke, Ross was 100 percent serious about picking Carr as his favorite player…Ross’s only complaint of Carr was how he acted on Hard Knocks, “he seemed like everyone’s dad.”

Look, I may be crazy, but in my opinion this is arguably the worst sports opinion I have ever heard come out of someone’s mouth. (We have heard some truly terrible one’s such as the Jets would win 11 games this season and compete for the AFC East, Brandon Jennings saying his 8 seed, Bucks, were going to sweep the Heats’ “big 3,” or that LeBron James was an overrated player in high school. But this one takes the cake for being the worst. Out of all the 1,696 players in the league Derek Carr is his favorite!!!!!?

I still cannot wrap my head around this madness.

To listen to the full episode hit the PLAY button below