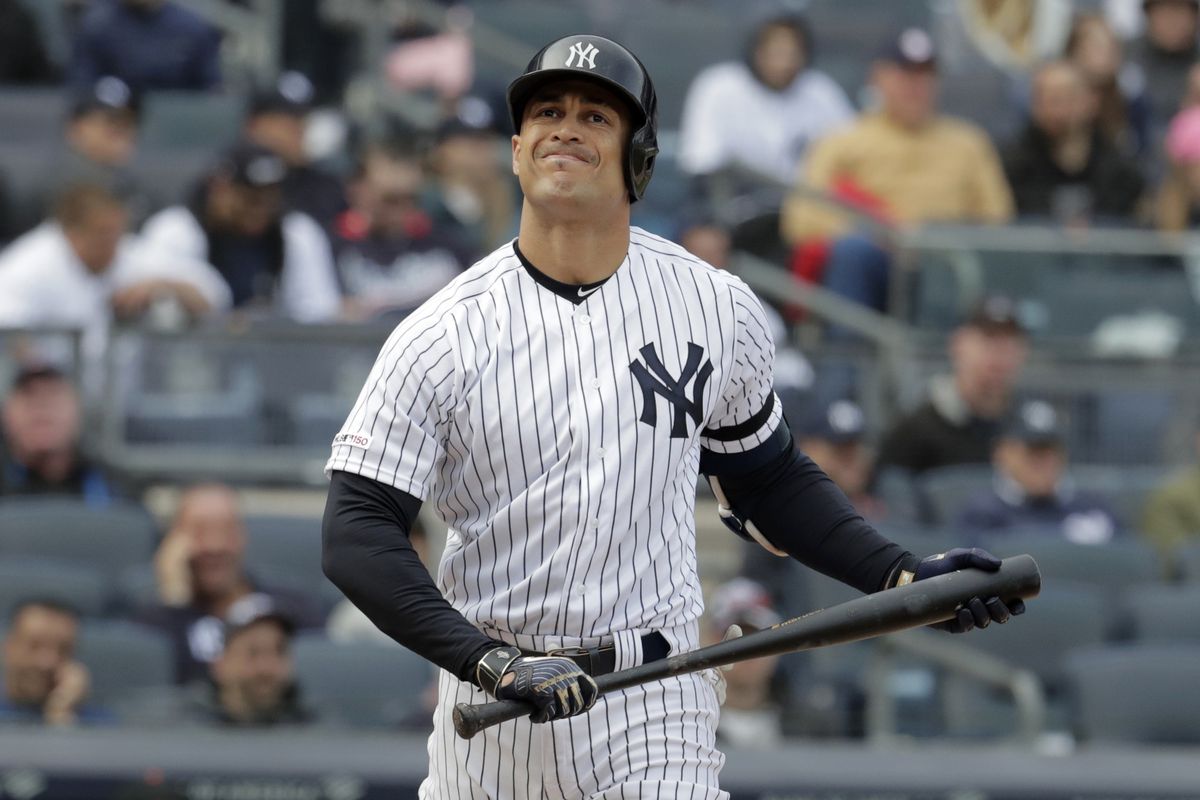 In the 2018 offseason, the Yankees made a big-time powerplay in acquiring reigning the NL MVP, Giancarlo Stanton, from the Marlins via trade. The bombers were fresh off of a trip to the ALCS, and many thought Stanton could be the piece to push them over the top. Unfortunately for the Yanks, Stanton had a difficult time adjusting to New York. Maybe it was the cold weather, maybe it was playing for a fanbase that actually cared, or maybe it was a drastic increase in meaningful games. Last season, Stanton stuck out 211 times at the plate, and had 21 less home runs and 32 less RBIs than his previous season. Although last season was a disappointment for all parties involved, Stanton was able to stay healthy, as he played in 158 games, and be an above average power threat hitting 38 home runs and driving in 100. This season has been a completely different story.

Stanton was injured after just the first 3 games of the 2019 season, and because of a slew of setbacks, those are the only games he has played in all season. Stanton is one of many important Yankees who have spent a considerable amount of time on the IL this season, but the Yanks “next man up” mantra has pushed them into being a first place team. Slowly but surely, some of their stars are making their way back into the lineup. Aaron Hicks is starting to get his stroke back, and Didi Gregorius put together an impressive first series in Cleveland this past weekend. Everyone is still waiting on the returns of Judge, Severino, (Ellsbury?), and Betances, but it seems as though Stanton’s return is not very anticipated. Why is that?

Giancarlo Stanton’s 2018 campaign disappointed many Yankee fans. They thought they were getting an MVP caliber player, and instead they got a 34-year old Alex Rodriguez, but with twice the strikeouts. Also, Stanton’s struggles seemed to rub off on Aaron Judge who was on pace to finish the season with as many strikeouts as Stanton before an injury caused him to miss around 6 weeks.

This season, with a ton of power missing from the lineup, the Yankees have shifted their focus onto putting balls in play, moving runners over, and valuing smart contact. With consistent contributions from DJ LeMahieu and Gio Urshela, among others, the Yankees have made a full transformation from last seasons strikeout parade. Two underrated cogs of this base hit machine are outfielders Clint Frazier and Cameron Maybin, who have both quietly put together extremely productive performances while seamlessly filling in the large shoes of Giancarlo Stanton. Both of these guys have added much needed speed, contact and consistency to the Yankee lineup.

Maybin, and 32-year old journeyman, is another genius acquisition of Yankees GM Brian Cashman. Since joining the Yankees, Maybin has hit .289 and has tallied numerous clutch hits and infield singles. Yankee fans were probably not expecting much from Maybin, who has been labeled as a bust by many, but he has come through again and again. It is comforting having a guy in the lineup who won’t strike out 200 times in a season.

Clint Frazier has also filled in for Stanton in the outfield rotation. Although he has had his fair share of controversy in the last week regarding his defense, or lack thereof, he has been able to separate it from his offense and become a force in the everyday lineup. Coming off of a disappointing 2018 season, where his concussion battles kept him in the minor leagues, Frazier came into Spring Training with something to prove. He didn’t want the bust label placed on his name. This season, Frazier has shown why he was such a highly touted prospect with “legendary bat speed”. He’s hitting .283 with 11 home runs and 32 RBIs, and he too is on pace for far less than 200 strikeouts.

Giancarlo Stanton is no doubt a highly talented player, and the Yankees are stuck with his large contract for the next 8-9 years anyways, but it has been extremely refreshing to watch some outfielders with something to prove. Last season, Stanton was the MVP, coming off of a 59 home run 2017 campaign. Although he had to prove to New York fans that he was legit, he had virtually no visible chip on his shoulder. With Maybin and Frazier, it is clear to see they are playing with a purpose everyday. Maybin, once a top prospect, has a ring with the Astros, but has had an otherwise underwhelming career. At this point, his only assets are his leadership, speed and heart. Frazier, a top prospect just a few years back, has had a difficult time adjusting to and being healthy in the MLB. The clock on him is ticking, but his productivity and upside have both been shown early on this season. Both of these guys will have a tough time remaining on the Yankees Major League roster when Judge and Stanton eventually return from injury, so they need to prove they have major league value while they can.

As a Yankee fan, I honestly feel more comfortable in a big spot with Cameron Maybin or Clint Frazier at the plate than Giancarlo Stanton. I still have nightmares of Stanton flailing at a slider in the left-handed batters box almost weekly.