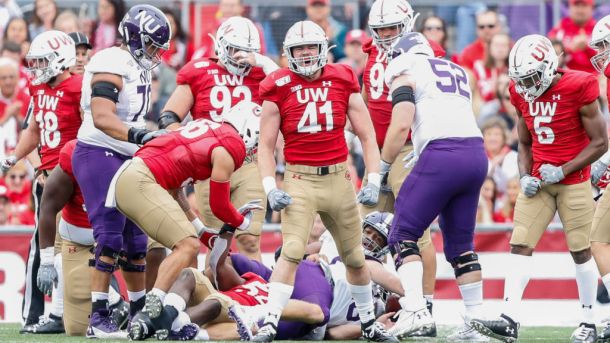 The Badgers had their first bad game of the 2019-20 football season last Saturday. A 24-15 win against Northwestern, with the offense struggling to ever get going.  There were some flashes of the Badgers we saw in the first three games, including two defensive touchdowns, but it was not the performance the fans expected. There is no reason for Wisconsin fans to get too nervous though.

The offense looked lethargic, even with Jonathan Taylor logging another 100+ yard game.  Other than Taylor, there was nothing going for the offense, and seemingly no adjustments were made to make the offense click.  On the other hand, the defense is absolutely lockdown. Combining for two touchdowns and five sacks, wreaking havoc all game. Things weren’t made easy on the Badgers defense as they were consistently on the field after a three-and-outs by the offense, but the D deserves all the credit for winning this game.

Looking ahead to next week, the Badgers are at home for the fourth straight week, against Kent State.  After a tough week, this is a great opportunity for this team to get the offense up and running again heading into Michigan State week. There is no reason why the Badgers shouldn’t be able to have a four touchdown lead at halftime, where they could eventually get some young guys in the game to rest key players.

After Kent State this week, the Badgers next four games include three ranked teams.  Michigan State, Ohio State, and Iowa are all looking to give this team some true tests. To put it simply, Wisconsin can’t afford to play the way they did against Northwestern against those three ranked squads or it is going to be bad bad news. The offense needs to sharpen up and give Jack Coan easier opportunities. Establishing the running game early and getting these athletic receivers into open space is the key to getting the offense back on track. The special teams could also use some cleaning up, after a muffed punt led to a touchdown this past week against Northwestern.

Saturday’s game against Kent State is a great opportunity for the 8th ranked Badgers to gain momentum heading into the most important stretch of the season. If the team performs the way they should, next week should shape up to be a highly anticipated Big Ten showdown against Michigan State.