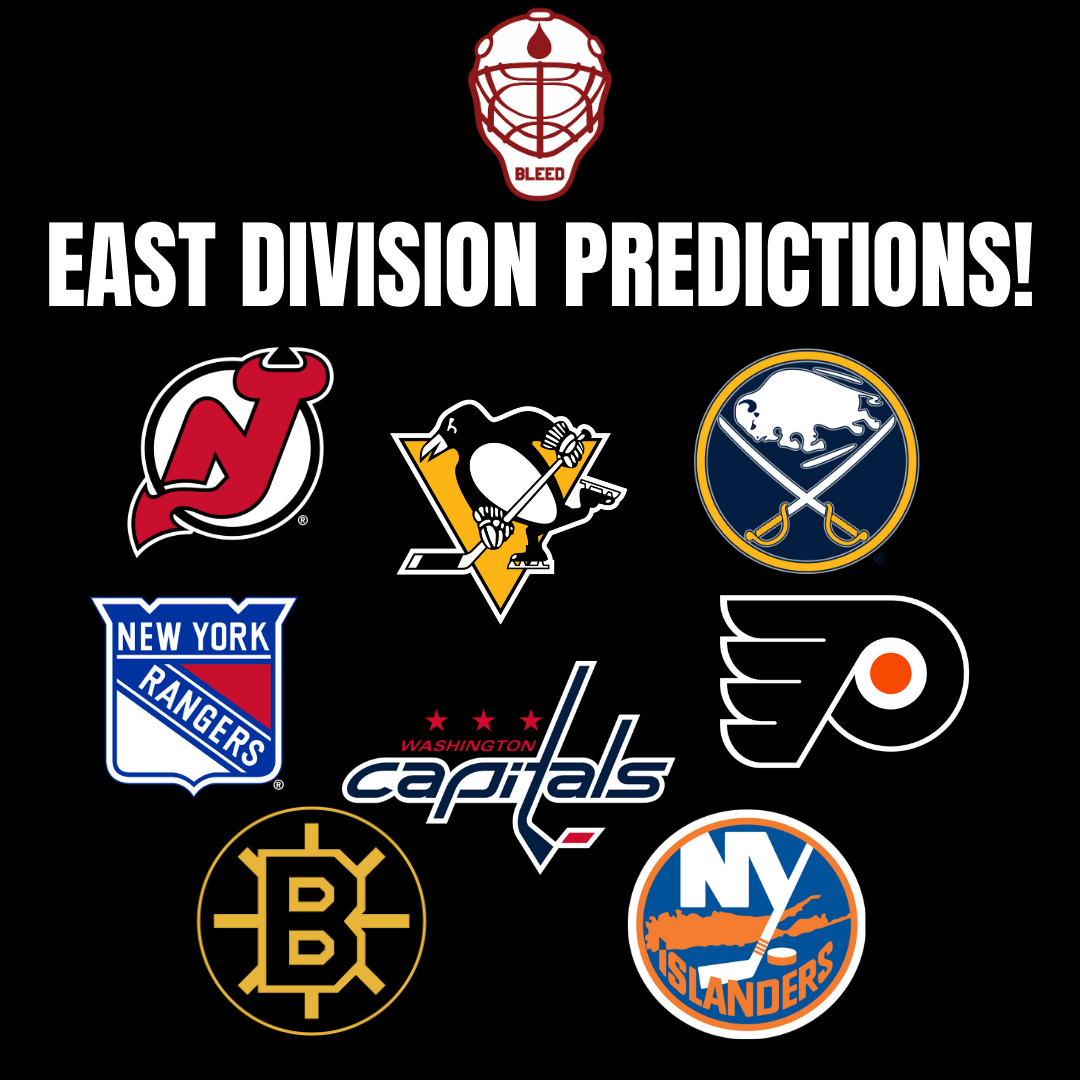 The 2021 NHL season is finally upon us and that means it’s time for some division standings predictions. Today, we start off on the East Coast with the newly formed “East Division.”

Arguably, the best division heading into the season consists of an already loaded Metropolitan division with the Capitals, Flyers, Islanders, Penguins, Rangers and Devils, plus the Bruins and Sabres have been added to the mix. The division does not include the Hurricanes and Blue Jackets, who were both placed in the Central division.

This season, the top four teams from each division will make the playoffs. It will not be easy, but which teams in the newly formed East Division will do it?

The Devils are not there yet, and playing in such a tough division will not help. The core of the franchise has been assembled with 2017 #1 pick Nico Hischier, 2019 #1 pick Jack Hughes, Will Butcher (drafted by Colorado), 2016 draft-pick Jesper Bratt, MacKenzie Blackwood, 2020 #7 pick Alexander Holtz and 2020 #20 Shakir Mukhamadullin. These players all have the potential to be high-level guys in the league for a long time, but are they all ready to take the next-step this season?

The old and the new. The Devils come into the season with a mix of both young players and veteran players, such as Subban, Palmeri, Zajac and newly-signed goalie, Corey Crawford. (UPDATE: Crawford announced his retirement on 1/9) The issue is none of these players will be able to push New Jersey to the next level unless the young players take a massive step forward.

With the team headed in the right direction, it will be another year of growth for New Jersey.

Bold, I know. The Penguins are coming off a disappointing play-in series loss to the Montreal Canadiens, a team that was not good enough to be in the play-in round in the first place. It’s not the first time the Penguins have made it to the dance and have performed below expectations. In 2019, they were swept by the Islanders in the first round and in 2018, they lost in the second round to the Washington Capitals, who would go on to win the cup. The question must be…How much longer does Jim Rutherford and the Penguins “go for it” with their current core group of players?

I do think this is the end of the Malkin-Crosby-Letang era in Pittsburgh. Once again, this division is tough and unlike many of the other teams in it, the Penguins do not have enough depth to stick with the top-tier teams. The acquisition of Kasperi Kapanen from the Leafs will for sure provide depth, but he’s only one player.

The Buffalo Bills have had a successful season, but will the Sabres be able to do the same? SigningTaylor Hall to a 1-year deal in the offseason is a great way to kick things off. Having Eichel and Hall together on a line is going to be awesome to watch and should create plenty of goals for the Sabres. For this team to be successful, 2018 #1 pick Rasmus Dahlin, 2019 #7 pick Dylan Cozens and Tage Thompson (drafted by St. Louis) must take the next step.

The biggest question mark, per usual, for the Buffalo Sabres will be goaltending. With many back-to-backs on the schedule, it’s hard to exactly say I’m confident in the Sabres’ tandem of Ullmark and Hutton. If the Buffalo front-office can improve the position then we might have a different story, but for now, it’s a major hole.

We might see Hall dealt mid-season if things are not going well in Buffalo. What happens to Eichel!?

Bet the over. The Rangers were a fast and fun team to watch in the 2019-20 season and drafting Alexis Lafreniere with the #1 overall pick will only add to that. This team is loaded with talent; Panarin, Zibanejad, Buchnevich, Kaapo Kakko, Filip Chytl, Adam Fox, Tony DeAngelo, Jacob Trouba and star goalie, Igor Shesterkin. This is a very good team, that will be good for a long time, but there are some signs of concern for THIS season.

Depth, depth, depth. Do you see the trend? I’m a strong believer that to be successful in this East Division you will have to have depth at both ends of the ice. The Rangers’ projected fourth line concerns me with Di Giuseppe, Howden and Lemieux. Will they be able to keep up with the Islanders’ Martin-Cizikas-Clutterbuck line? On the back-end, having Brendan Smith, who played fourth-line forward at times last year, and Jack Johnson in the top 6 concerns me.

The Henrik Lundqvist-less Rangers also have to rely on a 24-year old Igor Shesterkin and 24-year old Alexander Georgiev to hold their own between the pipes. Will they be able to do it?

After looking uninterested in the first round of the playoffs against the Islanders, Todd Reirden was out and Peter Laviolette is in as head coach of this year’s Washington Capitals. The 2018-19 Stanley Cup champions look to get back on track and they will do that around their “usuals”; Ovechkin, Backstrom, Oshie, Wilson, Kuznetsov and Carlson. There is no reason to doubt these players will not be able to perform the way they usually do.

With the departure of Braden Holtby to the Vancouver Canucks and the potential retirement of Lundqvist, it will be up to 23-year old Ilya Samsonov to shut the door.

The Islanders shocked the hockey world last season by making it to the Eastern Conference Finals, where they were defeated by the cup champions, Tampa Bay Lightning. But, it was one hell of a run for the Isles, reaching the conference finals for the first time since 1993. The good news for the Islanders is not much has changed on their roster heading into the season. They did trade Devon Toews to Colorado and let Thomas Greiss walk in free agency, but that was all part of Lou Lamoriello’s salary crunch plan. In addition, Johnny Boychuk retired. The Islanders still have to sign RFA Mathew Barzal, but there is no reason to believe they will not reach a deal.

With Barry Trotz, the best coach of the NHL, behind the bench, there is no reason the Islanders lock-down defensive style of play will not be continued. This team is stingy on defense and capitalizes on the limited scoring chances they create.

One player to watch is rookie goaltender, Ilya Sorokin. If Sorokin can play well, we might see the Islanders make another deep playoff run…

The Bruins once again come into the 2021 season as candidates to win the Stanley Cup and this time around they don’t have to play the Lightning in the regular season.

We know what the Bruins will get out of the best 1st line in hockey, Marchand-Bergeron-Pastrnak, when healthy. Key word: healthy. The B’s will be without both Marchand and Pastrnak to start the season because of injury. The trio played 600 combined minutes together last season and that’s with Bergeron missing 9 games.

The biggest concern for the Bruins at the moment is the blue-line. By not signing Torey Krug in the offseason, who signed with the Blues, and potentially not re-signing their long-time captain, Zdeno Chara, Boston is thin on the defensive end. If they do not make a move before the season begins, they could be in major trouble…

The goaltending tandem of Rask and Halaak, will go a long way for the Bruins with such a condensed regular season schedule.

Philly comes into the season off a 4-3 series defeat to the Islanders in the second-round of the playoffs. The way the Flyers played in the playoffs does not reflect the team they are. They are loaded on offense with Giroux, Couturier, Voracek, Hayes, JVR and Konecny. They also have great depth; something that will help immensely in a condensed and grueling schedule.

The Flyers defense is solid and the goaltending tandem of Hart and Elliot is VERY good. I’m expecting a huge breakout season for Carter Hart and the Flyers. This team is a legitimitate cup contender.