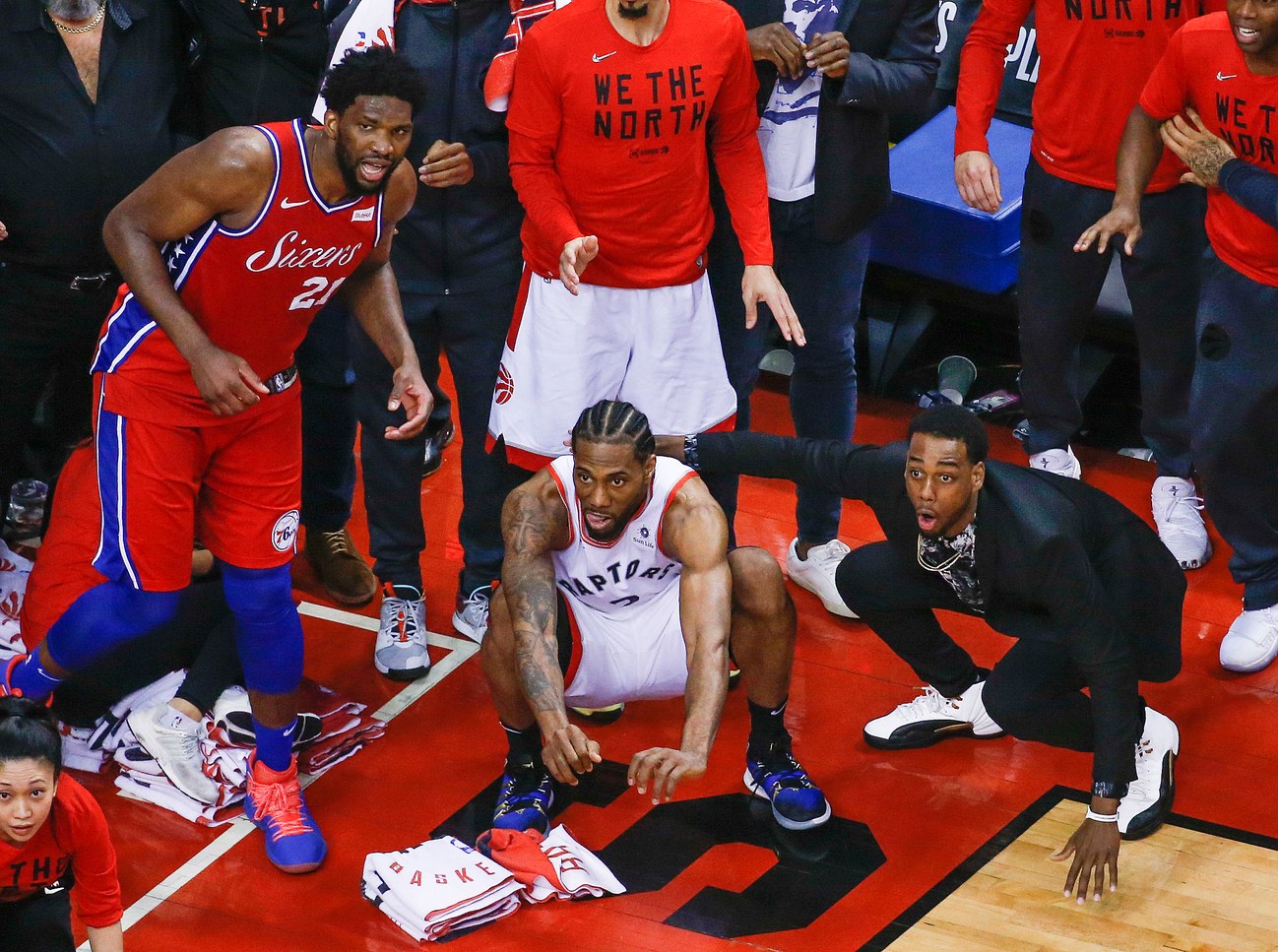 By now, we’ve all seen the shot a thousand times. Kawhi Leonard’s physics-resisting, season-saving and season-ending jumper that rattled around the rim for four bounces before falling in could potentially change the landscape of the league. At the very least, Philadelphia could look a lot differently. Joel Embiid and the 76ers took the loss hard. Embiid took it so hard, that Raptors players were even trying to encourage him. Yes, he talks a lot of smack to players, but that shows the respect he has earned around the league. Embiid put forth a herculean effort in game 7 by playing 45 minutes. He ended the game with up 21 points, 11 rebounds and three blocks.

Take one look at the way the game played out in the box score and you would think it was just another close playoff game that came down to the wire. The Sixers, however, have to feel a little empty and searching for answers after what was really a poorly played game 7 on their part. They made nine out of 27 attempts from three while shooting just over 40 percent as a whole… not exactly what you want in the biggest game of the season. The Raptors also bullied the hell out of Sixers on the boards despite a huge size advantage to Philadelphia. The Raptors pulled in 16 offensive rebounds. How does that happen with Embiid only missing three minutes of action? Better yet, how does Embiid let that happen? Ben Simmons didn’t come out with the same aggressiveness he did in game 6, leading to him attempting just five shots all night. And while JJ Redick and Tobias Harris played decent games and were probably the two most impactful of the starting five. When push comes to shove, neither really seemed to be the guy that would be the one to snap the team out of their funk and drag them to the ECF. Last but not least, Jimmy Butler was the Sixers only real option to try to single-handedly drag them to win via hero-ball, but he didn’t have it in him. The Sixers superteam did not appear very… super.

It’s not like the Raptors themselves played an amazing game either, going seven of 30 from three and shooting 38 percent as a team. Their star player just shined brighter and took over, just like he did all series. The Sixers had zero answer for Kawhi Leonard in any game, and that’s not totally unexpected given Kawhi’s status as a superstar. However, now the Sixers are looking in the rearview trying to put the pieces back together.

Philadelphia now heads into an important off-season with multiple questions and no real sure-fire way to find answers to those questions:

Should/will they offer Jimmy Butler a max deal over five years? Does Butler even want to stay around?

His recent answers haven’t given much clarity and a max deal takes you to age 34 with Jimmy. For a guy with as many miles as he has on his body, that might be a risk they aren’t willing to take and even though Butler was the go-to guy in the playoffs for creating and getting his own bucket for the Sixers, he may want to go to his own team and star as either the main guy or in a duo.

How much money is Tobias Harris actually worth and should the Sixers be rushing to give him that?

Sure, he’s younger than Jimmy and the deal to get him included one too many assets, but his role and production declined since the trade to Philly. The Sixers may feel more inclined to pay whatever it takes to keep Harris due to including multiple first round pics and Landry Shamet in order to trade for him but playing third or fourth fiddle may not be Harris’s favorite role.

If both Butler and Harris return, what do they do with Ben Simmons?

Simmons is up for a max extension once free agency begins, but as we’ve seen the last two postseasons, his unwillingness and inability to shoot diminishes his value as a point guard in this league. He told SLAM that he would be expanding his offensive arsenal this off-season, but until he consistently just attempts at least one or two threes a game, the offense with these four will run stagnant. Extending Simmons while keeping the other two also pushes the Sixers close to the luxury tax line with just those four, which isn’t exactly ideal.

Yes (and thankfully). All the hate and seeming lack of job security for Brown is head scratching. He has been the face of the franchise since he took over as head coach and marches on through all of the drama that continually hits the organization.

How do they keep Joel Embiid on the court?

Well, a smart way to do that would be to NOT play him in the first 26 straight games of the season before giving him a rest game, like they did this year.

This is not dissimilar to the last time the Sixers made franchise-changing moves following a game 7 in the playoffs. Following a game 7 lost to the Celtics in 2012, the Sixers were a team stuck in the middle ground, continually sneaking into the bottom half of the Eastern Conference but never really going far. That summer, the very same ownership as now decided a change was needed. They shipped out Andrea Iguodala and Nikola Vucevic in order to get Andrew Bynum, who ended up never even playing a game for the Sixers and leading to a 34 win season. That lead to Doug Collins getting the can and the entire front office getting fired. In came Sam Hinkie and well, I think you know the rest. The ripple effects from losing game 7 in 2012 and the subsequent off-season still shows its effects now.

It bears repeating, this off-season for the Sixers is huge and they have a lot they need to accomplish, which includes: the questions asked above, how to fill out the bench and add depth, how to keep everyone happy and how to best use those four players together. The to-do list for Elton Brand and ownership is long. There is an easier solution though. Given the minimal games played together and potential that was shown, the easy thing would be to just run it back with everyone and add pieces to the bench. But as shown in the past, ownership could decide to make things much more complicated. It was stated last off-season, but Philly has reached a critical juncture in its franchise composition and are headed into situation that could go downhill on them, and fast.