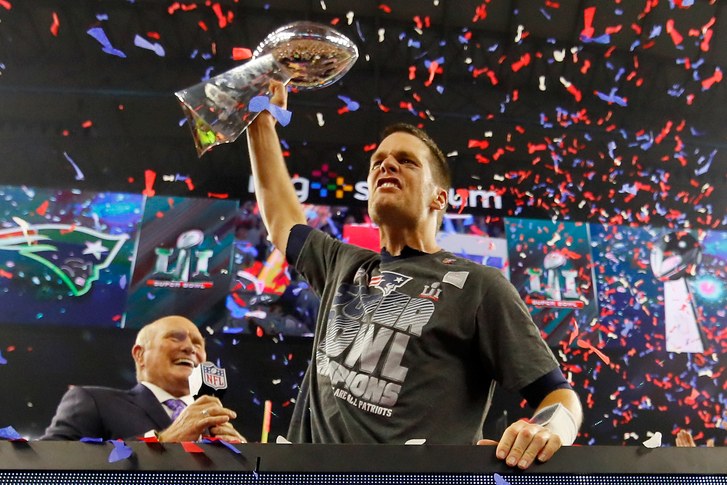 First things first, if your not a fan of neither team and have no clue who to cheer for in this years Superbowl. Just remember to cherish the game, this will be the last NFL game until the August pre-season games roll around.

The Superbowl is great, don’t get me wrong. But, it’s so disappointing.

The Superbowl marks the end of yet antoher NFL season.

I read a story online that absolutely made me crack up reagarding the Super Bowl. An elementary school teacher asked her students if they knew what the Super Bowl was?

A classmate responded, “isn’t that the last game of the regular season for Tom Brady?

Justa great story for all to hear.

What am I supposed to do? I kind of forget what I do on Sundays without football. Thankfully, we have The Masters and Game of Thrones coming up on April 14th.

That will be an all time Sunday.

But, before we worry about Sunday, April 14 let’s dive into the Patriots vs. Rams Superbowl preview

Hell yeah I did Baker, woke up feeling HELLA dangerous. The Patriots NEED this win, and I need them to to need to win this game. I think that makes sense?

Just understand this: if the Patriots lose, that will leave Tom Brady’s Super Bowl record at 4-4.

Is that true? ABSOLUTELY NOT. The thing is, this will drive the media ,and it’s haters so if the Patriots lose, do not fall for the medias dumb take on Brady saying he is not the greatest of all time for having a 500. Super Bowl record.

BUT, thankfully, the Patriot’s are not going to lose and none of this will happen.

My prediction is, the Rams interior line will mostly shut down the run. Is that surprising though? Suh and Aaron Donald (Defensive Player of the Year) will most likely clog up the middle. The Patriots need to have success in double teaming Darnold, and giving Brady enough time for the long developing play-action plays to develop.

The Patriots have been riding the “Underdog” mentality since their last loss in Pittsburgh. And you know what really annoys me?

I hate when people say the Patriots can’t name their Underdogs.

Yes. They can. I understand that Week 1 they couldn’t say they were underdogs. Not Week 2 nor 10 neither.

But after consecutive losses to Miami and Pittsburgh putting them at a vulnerable 9-5?

The media, the opposing fans, local media, EVERYONE was saying that the Patriots dynasty was over.

Don’t be afraid to admit it; it didn’t look like it was going to be our year for a moment.

But then something happened after the Steelers game.

The Texans lost to lose the #2 seed in the AFC playoffs and home-field advantage.

The offense looked motivated and healthy.

Yet, we’re back in playing in the last weekened we have been the past 3 of 4 years.

That weekend is Super Bowl weekend.

So, yeah, the Patriots can use ride the “Underdog” mantra. People counted them out by stating the team was too old, too hurt, too vulnerable, too slow and they used that fume to flame their post-season run into the Plaoffs.

The truth is, they never should’ve been refrenced o as “Underdogs” yet people are frightened or even concerned about the Patriots riding the Underdog train.

I would be too.

Naturally, the Patriots are using that mentality to find substantial success in the Playoffs. Don’t be outraged by the Patriots riding the term “Underdog” because of the success Brady and Co. have seen with the “chip on the shoulder.” They have responded to critics just as well as we expected, and the way the media hates them to answer questions, but behind the scenes use it for some whiteboard material in the lockerroom.

For the 9th time in my 20 year life, the Patriots are going to be in the Super Bowl. Which may be the most incredible stat of all-time.

But in all those years, not once have I seen someone successfully chirp, degrade and dominate Brady (Looking at you 07′ Giants).

Why are people so stupid? Would you chirp Brady before the big game?

No, you wouldn’t because you know he would make you pay for it.

Wait did I say dangerous I meant STUPID. NOT THINKING STRAIGHT. HIGH.

He said that “Age has deffinitley taken a toll,” referring to Brady.

The Most accomplished QB and Football player of all time. The man who has made a career of haters, doubters, and people who doubt him.

WHY WOULD ANYONE SAY THAT TO THE MEDIA. DON’T YOU SEE WHAT TOM DOES TO PEOPLE WHO DOUBT HIM.

Belichick will devise a gameplan to slow down the Rams offense, which is very strong at running the ball and establishing a run game. The Patriots need to have Jared Goff beat them in the air; the Patriots will find ways to get pressure on him while messing up the timing of the receivers. The corners are going to have to jam the receivers at the line of scrimmage and make Jared Goff looking for his 2nd or 3rd option.

Making Goff do more will get him rattled and suffice for an easy victory. If he handles the pressure, we will have to rely on ole’ reliable.

TBH (To Be Honest) I am quite scared of the Ram’s defense more so than their offense. I will take Belichick over McVay every day of the week, especially given 2 weeks of preparation. I think this defense is very underrated and will show how good they are today.

If you are betting on the game you already know I slammed Pats -2.5 and Moneyline.

For all my gambling men that like props, may god bless your sould and bet heads on the coin flip.

If you are buying Boxes or squares or whatever you call them, I hope a Tom Brady TD with 20 seconds left wins you the final score box.

To all my Patriots fans, let’s end this the same way it started.