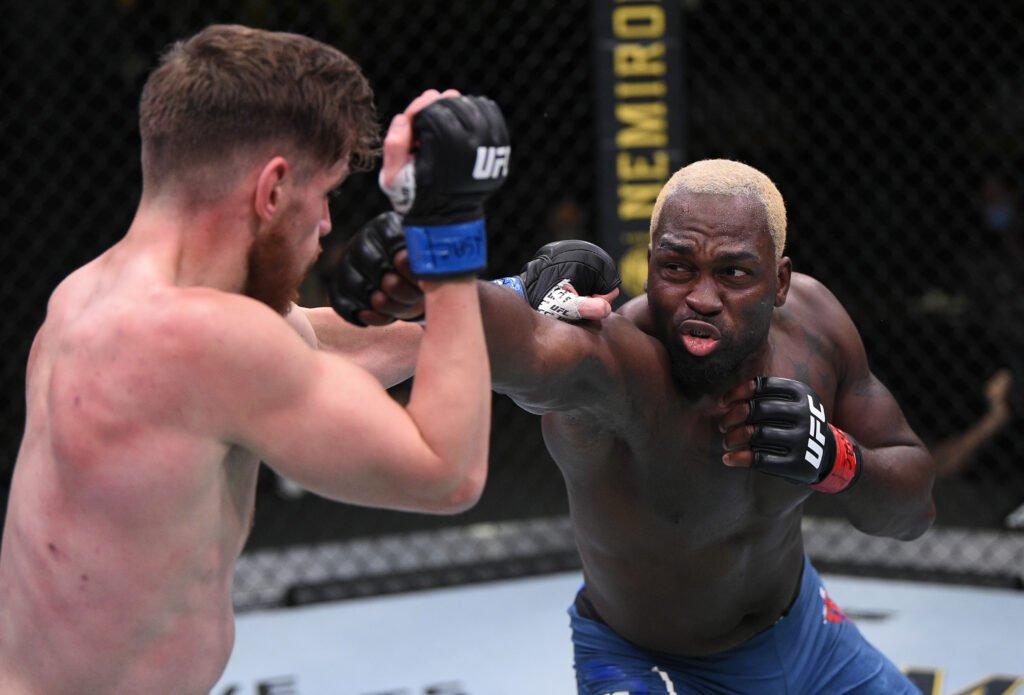 Derek Brunson earned a dominant TKO victory over young prospect Edmen Shahbazyan in Saturday night’s main event, making it three in a row for Brunson. The first round saw several standup exchanges between the two middleweights, with both fighters trying to feel each other out and land strikes. It was a close round and most people thought Shahbazyan might have taken it. The tides turned heavily in the second round  in favor of Brunson. The veteran began complementing his heavy striking with seamless transitions between his dangerous clinch game and elite wrestling.  He was able to take Shahbazyan down and land heavy strikes from the top. Shahbazyan grew tired as the round went on and Brunson’s ground and pound got more vicious. He almost put Shahbazyan out with ground strikes at the end of round 2, but Shahbazyan barely somehow managed to survive the onslaught. In the third round however, Brunson was once again able to take Shahbazyan down early and land significant ground strikes. Veteran referee Herb Dean had seen enough and called a stoppage to the fight within 30 seconds of the round.

+280 underdog Brunson executed his game plan to perfection and was in complete control of the fight. He looked incredible! Shahbazyan on the other hand did look good in round 1, but looked overwhelmed once Brunson began to vary his attack styles. The 22 year old prospect definitely gained some valuable experience in this fight. The veteran Brunson, who has bounced back recently and the dangerous youngster Shahbazyan both have a lot to look forward to at middleweight.

Perennial top 10 contender Derek Brunson proved the world wrong after a fantastic display against the dangerous Shahbazyan. He used his experience and diverse skills to perfection and people were shocked to find out that he did not receive a Performance of the Night bonus. Yoel Romero vs. Uriah Hall is in the works for mid August and Brunson should get the winner of that fight. That will be a very tough but a good path to the title for him.

Although “The Golden Boy” Edmen Shahbazyan lost a TKO, he showed signs of why people consider him a top prospect. He showed his striking ability in round 1 and although he slowed down after that, he had no quit in him. He showed great heart after taking serious punishment from Brunson. Shahbazyan’s next fight should be against Kelvin Gastelum. Gastelum is another perennial top 10 contender, but has lost his last 2 fights. Both these fighters, coming off losses, should fight each other to get back on track.

Fights to look forward to at the top of Middleweight
(C) Israel Adesanya vs. (2) Paulo Costa [Saturday, September 19]

Trevin Giles fainted moments before his fight against Kevin Holland and the fight had to be waived off. Joanne Calderwood also fainted backstage after her fight against Jennifer Maia, and had to be hospitalized. My thoughts go out to both of these fighters, and hope they get better soon.