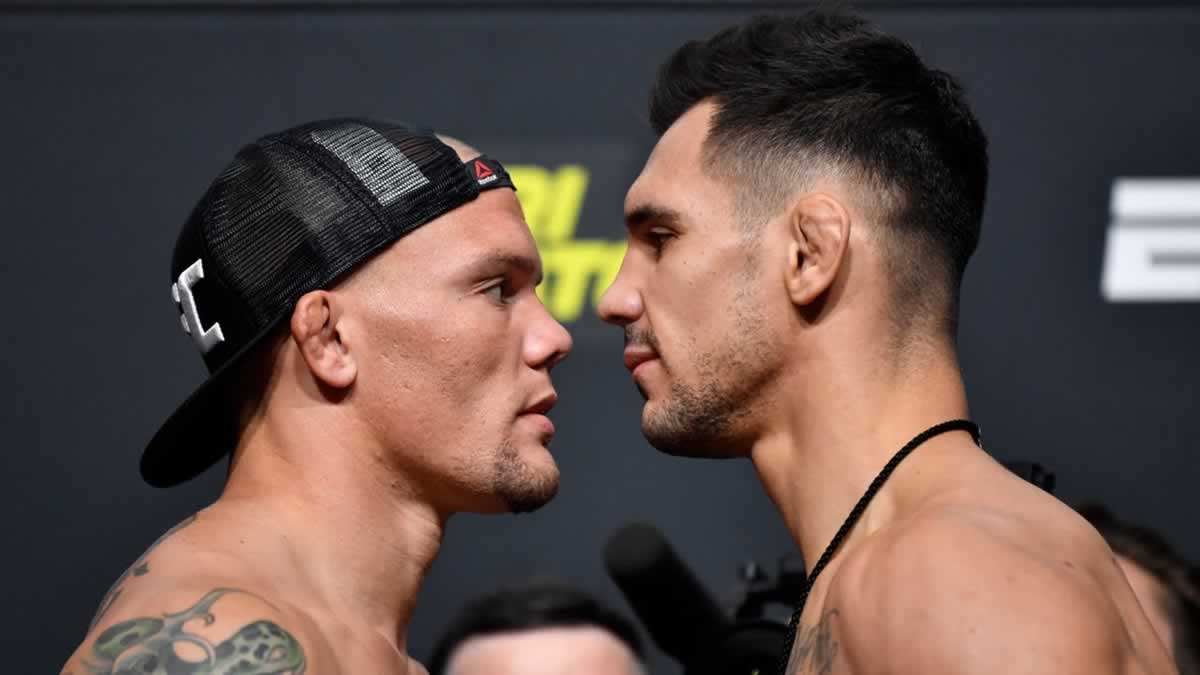 Former title challenger and #5 ranked Anthony “Lionheart” Smith takes on the up and coming #8 ranked Aleksander “Rocket” Rakic. Smith is coming off a one-sided loss to veteran Glover Texeira in May, while Rakic is coming off a split decision loss to Volkan Oezdemir in December 2019, which is only the second loss of his career and his first in 13 fights. Although Smith had an extremely difficult last fight, he cannot be counted out because he has bounced back several times after losses. He has won and finished both fights after his past two losses. As his record suggests (19 KO/TKO + 12 submission), Smith has very good striking and a high level submission game. He will look to use both of these to his advantage, especially if the fight goes to the ground. Rakic on the other hand has finished 9 of his 12 victories by KO/TKO. His striking and movement is outstanding, and he is a very entertaining fighter. These skills were on full display when he knocked out Jimi Manuwa with a vicious head kick. I am excited to see how both these fighters bounce back from their losses. Can “Lionheart” once again come back to win, or will the younger Rakic be able to add a top contender to his list of wins?

Smith vs. Rakic over 1.5 rounds (-155)
This fight will definitely go over the first round and a half. Anthony Smith even when he loses by KO/TKO is generally later on in the fight. He is able to absorb damage well. The younger Rakic will also be able to last past the the 1.5 round mark.

Lawler by KO/TKO (+400)
Although former champ Robbie Lawler has lost his last 3 fights, I believe that he will bounce back and knockout Neil Magny. Lawler has to use his insane power to get Magny out of there quickly because Magny has a fantastic gas tank. It will be interesting to see both of their approaches and tactics during the fight. I think Lawler will catch Magny and put him out early.

Grasso by decision (-175)
The favorite Alexa Grasso has more experience against the top fighters of the UFC and has the advantage on the feet. She will land strikes on the feet and grind out the decision against Ji Yeon Kim.

Algeo to win (+220)
Although this is Bill Algeo’s first fight in the UFC, his size and reach will be too much for the more experienced Ricardo Lamas. Algeo lands 10 significant strikes per minute, which is absolutely ridiculous and if he can get anywhere close to those numbers tonight, he will beat Lamas.