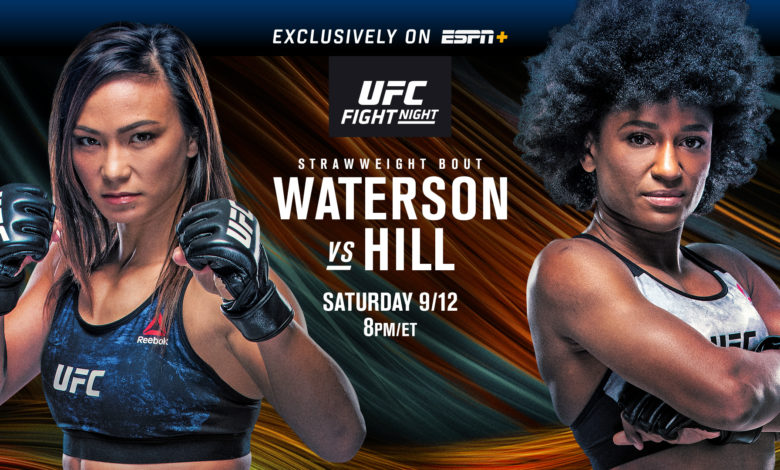 Hill to win (-124)
Angela Hill’s pace and pressure will be too much too much for Michelle Waterson. Waterson is a very technical striker and good on the ground, but Hill can mix it up and will get the win in tonight’s main event.

Azaitar to win (+112)
The undefeated Ottman Azaitar will continue his winning ways against Khama Worthy. Azaitar possesses unbelievable power at 145 and his last 4 wins have come by KO/TKO. I would not be surprised if he finishes Worthy tonight.

Lee to win (-330)
Although Andrea Lee is coming off of 2 losses, they have both been split decisions, which shows just how close they have been. She will be able to dictate the fight against Roxanne Modafferi and get the win.

Rodriguez by KO/TKO (-120)
Mike Roriguez will use his size, reach and speed advantage to land on the 39 year old Ed Herman. Although Herman has the experience on his side, Rodriguez will be too much for him on the night.

Bobby Green to win (-270)
Bobby Green is coming off of a dominant victory over Lando Vannata, and his confidence will be high. Alan Patrick is 37 years old and I am not sure how he will hold up against Green. Green is also good at mixing up his attacks, he can attack on the feet and grapple, whereas Patrick prefers to stand. Green will get the job done.

Quarantillo to win (-255)
Billy Quarantillo is coming off of 7 straight wins and will make it 8 against Kyle Nelson. Quarantillo will look to take the fight to the ground where he is comfortable because Nelson could be dangerous on the feet because of his kickboxing background. If Quarantillo can make it past round 1 he will definitely get the win.