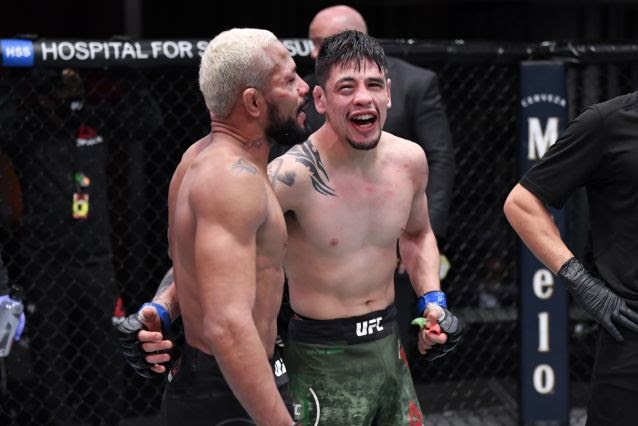 What an absolute banger of a PPV that was! There’s a good amount to talk about, but let’s talk bets first.

After a wild night of fights, I ended with a record of 5-2-1 with all 3 of my 3 best bets hitting! Although the Tony Scraps’ Parlay did not hit, profits are profits baby!!!

Deiveson Figueiredo and Brandon Moreno: The main event matchup for UFC 256 turned out to be an all-out war. This was an extremely close fight; both Figueiredo and Moreno had some crazy moments where they looked like they won, but the biggest turning point in the fight was when  Figueiredo was deducted a point for an illegal kick to the groin in the 3rd round. After that Moreno looked fantastic in the championship rounds. In the end, it was a majority draw. If Figueiredo didn’t get deducted that point he would have won by unanimous decision. Since nobody won the fight, the belt stays with the defending champion. It surely was one of the best fights in UFC flyweight history. I’m excited to see them run this one back soon.

Charles Oliveira and Tony Ferguson: Oliveira got a statement win last night. He absolutely dominated Tony Ferguson. Tony looked washed up and it could be time to call it quits soon. It was Oliveira’s 8th straight victory and he has solidified himself as a top tier contender for the lightweight title.

Mackenzie Dern vs. Virna Jandiroba: Definitely was an exciting fight. Dern looked improved on her striking and got a scrappy win last night. She looked pretty trash in the second round and I was nervous because she was honestly my lock of the night. It was a close fight that could’ve gone either way. Dern barely won and will move up the ranks but I don’t think Jandiroba’s rank will fall at all from this loss.

Kevin Holland and Ronaldo Souza: Holland is an absolute savage. 5-0 this year! Did someone say fighter of the year? Holland found himself on his back early in round one. He created enough space that he could throw a right hook off his butt. Yes, that’s right, a “butt hook”. That strike knocked out Souza. Unreal. Holland is a fun fighter. He will continue to rise up the ranks in 2021. He will definitely deserve a title shot at this time next year.

Ciryl Gane and Junior dos Santos: Junior dos Santos is a living legend but there really isn’t a reason for him to fight anymore. Gane’s laid back and calm approach to this fight was fantastic. He forced dos Santos to over pursue him and to chase for strikes. As I expected, Gane ended the fight by knockout in the 2nd.

Cub Swanson and Daniel Pineda: This fight messed up the Scraps Paraly big time! Swanson was a huge underdog last night. 1-4 in his last 5 and coming off a leg injury. No way in was betting on this dude.  Cub used great striking and was able to secure a KO in the second round. A huge win for him at this point in his career.

Anyway, I should be back at some point this week to preview next saturday’s fight night. I love that card more than this one so I expect us all to win big money.